The penultimate tournament on the PGA EuroPro Tour, with over £50,000 in prize money 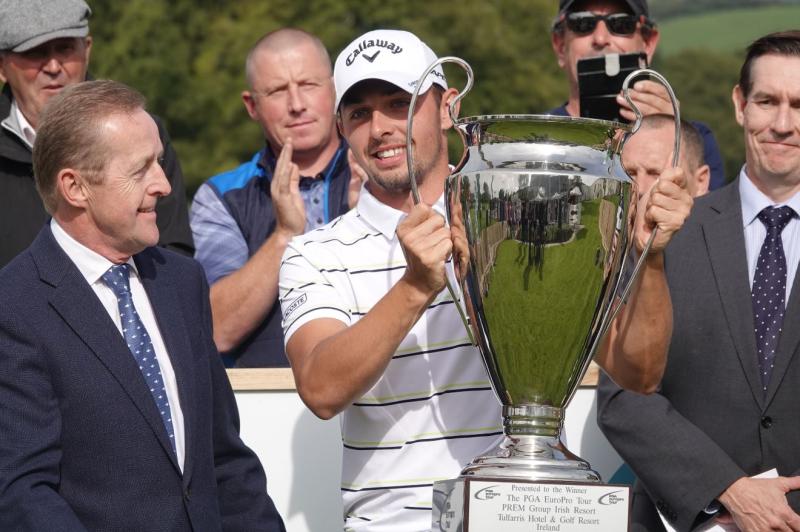 Marco Penge’s long-awaited search for a victory on the PGA EuroPro Tour has ended clinching The PREM Group Irish Masters title at Tulfarris Hotel and Golf Resort, on the West Wicklow border.

Penge (Golf at Goodwood) finished one clear on the final day with rounds of 66, 67 and 71 to move to second in the Race To Desert Spring rankings.

A maiden victory on the Tour has been close many times already this season for Penge but he finally prevailed in Ireland. He said: “I’m over the moon. A bit emotional and speechless. But yeah, I am buzzing.”

“I played this course last year and I was in a great position to win and I didn’t get it across the line. I hit it pretty good this week. It’s still not quite where I want it. My putting saved me today thank god after missing a two-footer earlier on.”

Alasdair Plumb (Host My House) didn’t make life easy for Penge though, with a final round of 67 (-5) to go with his earlier 70 and 68 to give him his first top three finish on the tour in only his fifth event of the season.

Clubhouse leader from round one, Adam Chapman (Windermere Golf Club) recovered from a bad day on Thursday to post a final day round of 65 (-7) for the best round of the day to finish third.

Tom Gandy (Rowany Golf Club) had a good final day too to push him well into the top 60 in the Race to Desert Springs rankings with rounds of 70, 70 and 68 to tie for fourth with Nick Watson. Watson of Stoke Rochford Golf Club was one under and eight under overall.

CEO of PREM Group, Jim Murphy said: “What a fantastic tournament and huge congratulations to Marco Penge who was a very deserving winner.  I would like to thank the EuroPro Tour and our own team here at Tulfarris Hotel and Golf Resort for their hard work and passion.  Tulfarris is a very special place and we look forward to seeing The Sky Sports highlights programme which features all the exciting play as well as showcasing our resort and the stunning Wicklow landscape.

"It’s incredible to think that, through the TV coverage of this tournament, our brand and property will be seen in over 500 million homes in 138 countries.”

Set across three peninsulas the stunning 18-hole championship golf course was designed by celebrated course architect Patrick J. Merrigan.  The renowned golf course should present plenty of challenges to competitors, with several holes flanked by the beautiful Blessington Lakes.  Since PREM Group purchased Tulfarris over, €6 million has been spent on the property with over €1 million being spent on the golf course alone.  Improvements on the course include the creation of a new tee box on the 16th while extensive drainage works were completed on the course in order to allow for more winter play and to extend the golfing season.

Further improvements include the addition of a brand new contemporary, cedar clad clubhouse which enjoys stunning vistas onto the course and lakes, the renovation of many of the Manor House bedrooms whilst the lobby, bar and restaurant have also been reimagined.

The PREM Group Irish Masters is the penultimate tournament on the PGA EuroPro Tour, which gives the brightest young talents in European golf the chance to earn a place on the European Challenge Tour. This is the only tournament that will be played outside the British Isles this year, and there is more than £50,000 in prize money available to those competing this week. The top five golfers at the end of the season will be awarded a category on the 2020 Challenge Tour.

There have been some classy graduates from the PGA EuroPro Tour in recent years, including Major winners Louis Oosthuizen and Carl Schwartzel, while Nicolas Colsaerts and Ross Fisher have represented Europe in the Ryder Cup after playing on the tour early in their careers.

Highlights of The PREM Group Irish Masters will air on Sky Sports Golf on 10, September 2019 at 8pm.  See www.tulfarrishotel.com for further information on Tulfarris Hotel and Golf Resort.