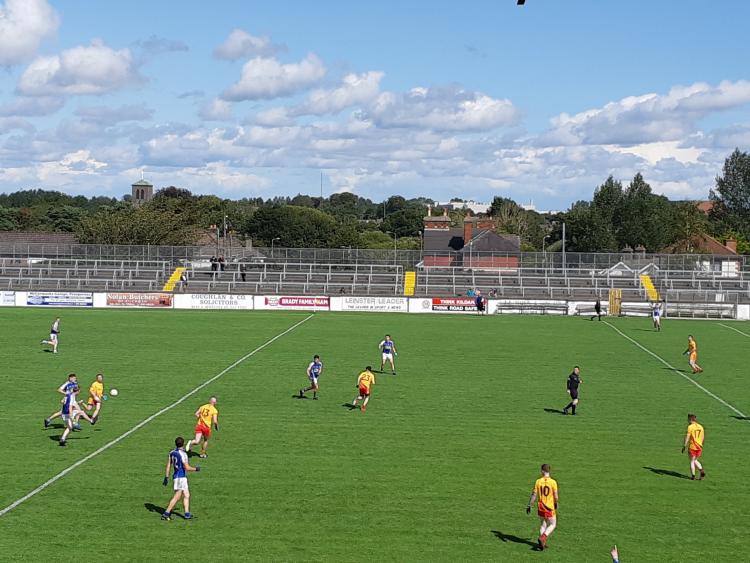 Castledermot put the seal on second place in Group 2 of the Senior Football Championship with victory over St.Laurences on Saturday afternoon.

In a rather forgetful affair it was all about the  free takers with Padraig Fogarty and Gavin Keating kicking scores for fun.

Keating ended with 0-7 in total and he is a crucial part of the team game plan which saw Emmet O'Keefe and Paraic Murphy getting the points from play.

Castledermot trailed by two points at half-time but they were much improved in the second period and ran out worthy winners.

Larries did get within a point at one stage late on but their attacking was very sporadic and Castledermot had the crucial edge and after finishing bottom in their group last year it showed a mark improvement.

The prize at stake for both sides was to finish second in the Group 2 Table but if most of the opening period was anything to go by it wasn’t something they were majorly interested in as it took twenty five minutes for the first score from play with a hugely tactical contest ensuing.

The first four points were all from frees as Padraig Fogarty and Gavin Keating took centre stage with the scoring.

Keating got Castledermot on the board with a converted placed ball in the 3rd minute after Emmet O’Keefe was fouled before Fogarty replied in kind a couple of minutes later.

Keating then edged Castledermot back in front a couple of minutes later but Damien Hendy’s side were pretty wasteful in front of goal as they had the majority of the possession at that stage.

Fogarty levelled up matters with a free a couple of minutes later and Larries got something going as a result with Adam Steed kicking their first from play in the 25th minute.

Fogarty then kicked his third free of the half as Larries went into the break with a 0-4 to 0-2 lead.

Laurences had the aid of a sizeable breeze in that first period and as a result Castledermot kicked a lot more ball upon the resumption and it worked a treat as they kicked the opening two points of the half to level things up with a free from Keating coming on the back of a fine effort from play by Emmet O’Keefe.

Laurences had issues throughout the second half with discipline with regards to conceding frees and it all started when Stephen Mann received a black card in the 35th minute before Keating from a 45 and Paraic Murphy with an excellent attempt on the sideline had Castledermot 0-6 to 0-4 ahead.

Adam Steed reduced the gap for Laurences a couple of minutes later but their attacking plan struggled to function and they went scoreless for a period afterwards which Castledermot revelled in.

A pair of Keating frees and an O’Keefe score from play had Castledermot four points to the good but an incident that summed up their defending occurred when a patient Larries move went from wing to wing and lasted roughly two minutes but a Castledermot back still managed to get a block on the ball.

Laurences refused to give up and throw in the towel though and they were back within touching distance after three points in a row from Fogarty x2 and Shaun Fahey.

Adam Steed then had a chance to equalise but he shot waywardly wide and the Larries chance to draw level seemed to have gone.

Castledermot with the help of Gavin Farrell who had a storming second half finished well and fittingly Keating kicked a last gasp 45 to secure a two point victory.