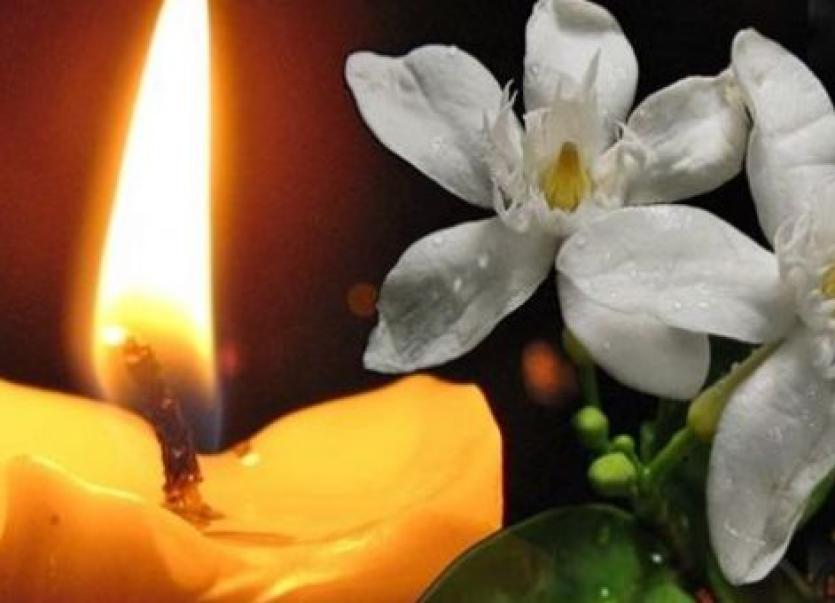 MAY ANN REST IN PEACE

Reposing at her daughter Yvonne's residence, eircode R14A299, Abbeylands, Castledermot, from 6pm today, Sunday, with prayers on Monday evening at 8pm. Removal on Tuesday at 10.30am to The Church of The Assumption, Castledermot, arriving for Requiem Mass at 11am, followed by burial in Moone Cemetery.

Reposing at his home (eircode W91 DK53) this Tuesday (3rd Sept) from 2pm to 8pm with rosary at 8pm. Funeral Mass on Wednesday at 1.30pm in the Holy Trinity Church, Derrinturn, followed by burial in the adjoining cemetery. Family flowers only, please, donations to Kildare Palliative Care, if desired. House private Wednesday, please.

May Peg Rest In Peace

Reposing at McWey's Funeral Home, Abbey View, Kildare Town from 4pm on Monday with rosary at 8 o’clock. Removal on Tuesday morning at 10:30am to arrive at Saint Brigid's Parish Church, Kildare Town for requiem Mass at 11 o’clock. Burial afterwards in St. Conleth's Cemetery, Kildare town. Family flowers only please. Donations if desired to “The Alzheimer’s Society of Ireland”. Donations box in church.

Family flowers only, donations if desired to a charity of your choice.

Reposing at his residence from 4pm on Tuesday with Rosary and Vigil prayers at 9pm. Requiem Mass on Wednesday at 11am in St Kieran's Church, Tullaherin, followed by burial in the adjoining cemetery. House is private on Wednesday morning, please.

MAY JAMES REST IN PEACE

Retired member of An Garda Síochána.

Peacefully, at Naas General Hospital, surrounded by his loving family.

Father of the late Hugh