Cheque in excess of €15,000 handed over this afternoon 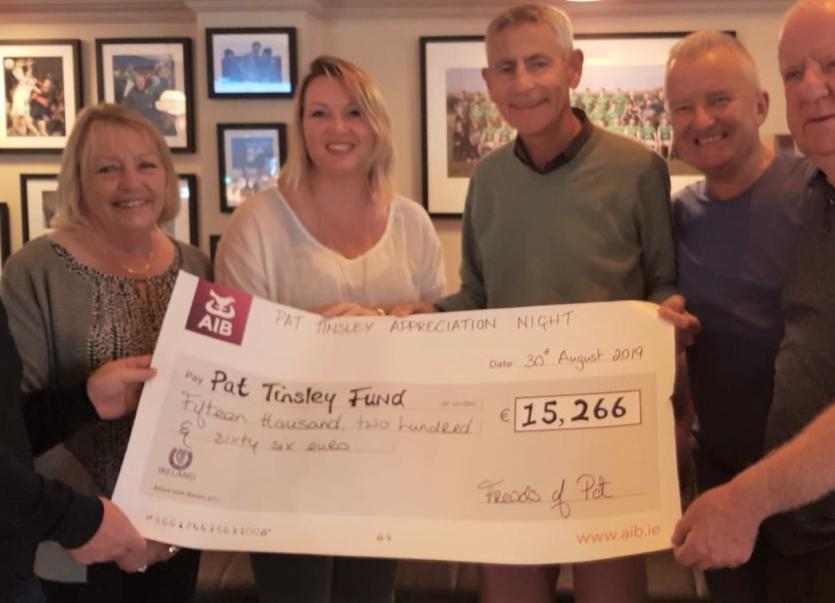 It's rare for Pat Tinsley to be rendered speechless but he was lost for words this afternoon when the proceeds of last week's  appreciation night at McDonnell's Bar, Newbridge were fully realised. A cheque to the value of €15, 266 was presented to the Newbridge photographer who was (briefly) silenced but "over the moon" with the community's generous response.

Our photograph shows left to right, Eric McDonnell junior, with raffle ticket supremo, Mary Tyrrell, Jackie Tyrrell, who co-ordinated the event, Pat, with music man Johnny Peters and Eric McDonnell senior. Missing from today's presentation is Ronan Sweeney, who was also one of the chief organisers of last Friday's event.

Pat spoke earlier today on KFM of his condition, hATTR (hereditary Amyloidosis) and of his recent good news, that he will now receive the upgraded version of Patisiran here in Ireland, a drug which has presented positive results for patients with Amyloidosis in the UK.

“I received the good news from my consultant last week that I have been selected to avail of the drug Patisiran via a study under Dr Mark Coyne.” Dr Coyne is a specialist in Plasma Cell disorder and Amyloidosis at the Mater.

“A special word of thanks to the McDonnells for hosting the appreciation night” said Jackie. “The staff were tremendous, and it was so generous of the two Erics to donate the profits from the bar. On behalf of Ronan, Eric senior and junior, and all who helped out and supported the night in any way, thank you so much. Go raibh míle maith agaibh go léir!"