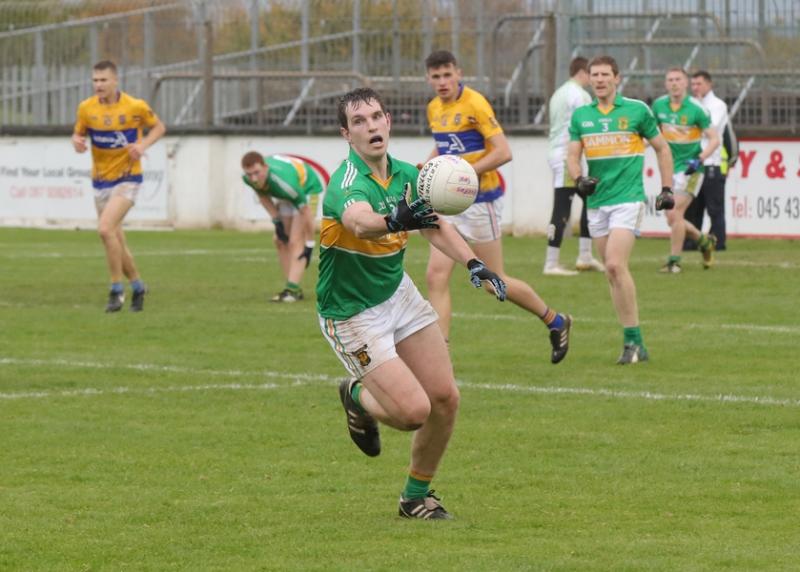 The Intermediate Championship reaches the knockout stages this weekend which begins with the meeting of Nurney and Sallins in Manguard Plus Hawkfield later this afternoon.

After making the semi-finals in 2018 Nurney will be somewhat disappointed to be even at this stage but defeats against both Straffan and Leixlip meant they only finished third in Group 2.

Their style of play lends them to staying in games with Mikey Conway often leading a lone furrow up front but the longer the Championship goes on the bigger scoring threat they will need and both Conway and Andrew Behan are leading players in that regard.

The opponents are Sallins and they have already had a hugely productive year with promotion to Division 2 and although they were well beaten by Monasterevan in the subsequent final there is still a lot to work with there.

The team in Green and White were beaten by Allenwood in their opening game but they have since got back on the horse with wins over Milltown and Suncroft.

With all due respect neither of those two teams would be of the standard of Nurney but they are still capable of going up that gear and in what is expected to be a very tight game they showed enough against Allenwood to be able to get a result here.

It is arguably the game of the weekend in the Intermediate Grade as local neighbours Ballyteague and St.Kevins collide in a do or die encounter.

Both would have been seen as contenders for the title at the beginning of the year but if truth be told it hasn’t quite clicked fully for either and this game gives them the perfect opportunity to find a bit of form.

Kevins lost out after a replay in the semi-finals to Monasterevan last year but it’s gone a bit downhill since with relegation from Division 2 in the League and a heavy defeat to Clogherinkoe in the opening game in Group 1.

Since then they have got back on track with wins over Ellistown and Rathangan but a date with the Larks will be a different matter.

Ballyteague found themselves in a tough group and they were feeling the heat with a one point defeat to Kilcock followed by a Monasterevan setback but victory over Kilcullen kept their hopes alive.

This will be close and there appears to be little between the sides with good players at both ends but if Jimmy Hyland can get his game into flow from either inside or on the 40 he can put up a winning score to keep Ballyteague in the hunt.

The sole game in the Intermediate Championship on Sunday sees Straffan and Rathangan come together in Hawkfield and in keeping with the competition its again expected to be closely fought.

Straffan to their credit have had a fine campaign so far and despite losing their first game to Leixlip they have come back with wins over Nurney and Kill.

The Kill win was very comfortable last weekend but it would have been the Nurney result that made people stand up and take notice after they overturned a deficit with the likes of Rob Kelly and John Tracey starring.

They will need those players on their game once more tomorrow if they are to make a surprising visit to the last eight but reportedly all has not being well in the opponents camp.

There was apparently a discipline breach which led to a number of Rathangan players being dropped for the Clogherinkoe game so a five point loss doesn’t look too bad in hindsight even if it was something of a dead rubber from the Cloughs side of things.

Their sole victory came against near neighbours Ellistown and they will need to be much improved here and while you can expect a backlash all the form is with Straffan and they should have enough to seal victory.

The meeting of Kilcock and Milltown rounds off proceedings on Monday Night.

The game was originally planned for last Thursday but was refixed as a result of a bereavement in the Milltown club.

In many senses Milltown have overachieved to get to this stage as they achieved Championship safety on their return to this level when a last gasp goal helped them get the better of Suncroft a couple of weeks ago so they are in bonus territory really.

Kilcock are at the other end of the spectrum and some may feel its about time they got back to the Senior Ranks.

They went mightily close in 2017 when a late Raheens flurry broke their hearts but they are back in form again and with the help of Daragh McArdle, Shane O’Rourke and Daniel Courtney they achieved victories over Kilcullen and Ballyteague in their group but they fell to Monasterevan after leaving their shooting boots at home.

They should get over this hurdle and they will be incredibly dangerous opponents in the latter stages of this competition.