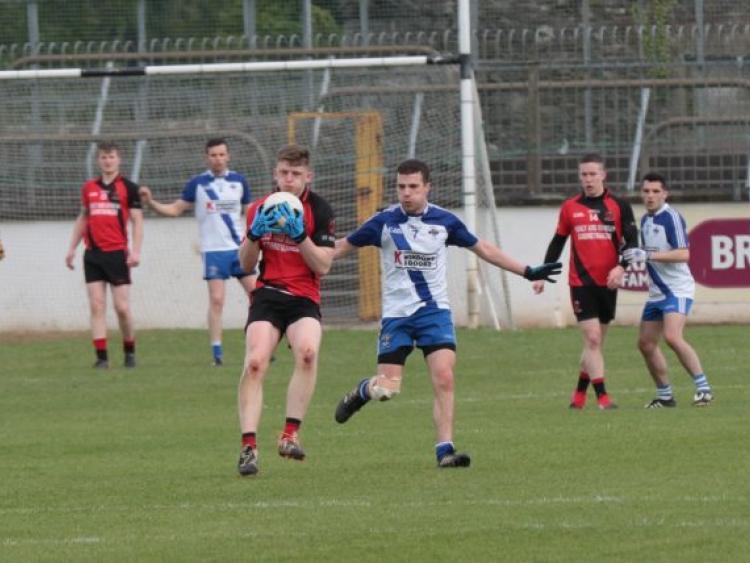 Recent momentum and an outstanding eleven-point win over Ballyteague in the preliminary quarter-final in  Hawkfield on Saturday means St. Kevin’s are peaking at the right time.

St. Kevin’s may have had to play an extra game getting into a quarter-final against Clogherinkoe, but steady progress has allowed them to gain momentum.

Despite the one-sided result, speaking after the game, manager Mark Fitzharris remarked that over the years little or nothing has separated these local derby teams.

“Maybe the scoreline doesn’t suggest that today, but only in the last fifteen minutes did I feel we pulled away.”

Controlling the game from the outset, but always looking over their shoulder at a resilient Ballyteague side, Fitzharris says that “it was a real battle and that’s normally the way it is against Ballyteague.”

“Similar to last year, we came off a poor league campaign and it took us a while to adapt to the Championship, but we’re back working hard in training.”

Leading 0-4 – nil after the opening quarter, St. Kevin’s got on top early in the game and stayed there. Ross Carew, Barry Noone, Ryan Casey and Declan Flaherty, who’d all had a positive bearing on the game, left Ballyteague searching for scores in the first-half.

A long-distance Stephen Connolly free and a Fionn Murphy point closed the gap to three points by the 25th minute as Carew and Noone registered corresponding points.

Finishing the half with six wides apiece, St. Kevin’s made full use their first-half wind advantage to lead by five points at the break.

As Noone and Carew extended their tallies to three apiece, Seamus Hanafin’s 28th minute missed goal chance might have been better served over the bar.

These scores might have reduced the margin to three points three minutes into the second-half, but St. Kevin’s responded by outscoring Ballyteague by 1-9 – 0-6.

When Ballyteague goalkeeper Derek Mooney fouled Carew inside the square for a penalty and a blackcard, Johnny Fitzharris’ strike meant that Marc Herbert’s first job was picking the ball out of the net.

Hyland and Connolly points kept a sense of hope alive, but when Flaherty and Casey responded, it was clear which team was in the driving seat.

Substitutes Gavin Smullen and Brian McGrath kicked concluding points for Ballyteague, but when Flaherty kicked his fourth point and Noone his fifth, St. Kevin’s progressed into the quarter-final with a handsome, if not flattering, elven-point margin.