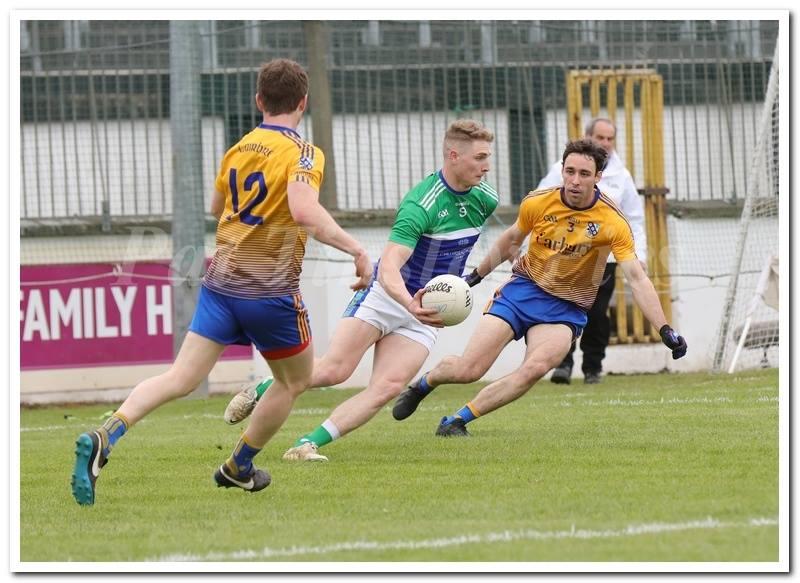 It was what Championship Football is supposed to be all about as Johnstownbridge yet again bested their rivals Carbury to seal a place in the Quarter-Finals of the Senior Football Championship.

It was a game that was full of incidents and it was the mercurial Daniel Flynn who settled the result in the Bridge’s favour with a sublime goal in the 54th minute that gave them a lead they wouldn’t relinquish.

It’s a game and result that Carbury will have major regrets on though as they seemed to be in complete control until Flynn won a penalty which Sam Doran converted in the 31st minute which looked particularly generous.

It meant the game was level at the break after Carbury played almost all the football and further second half goals from Flynn and Doran looked to have settled the tie for Johnstown.

Carbury had a glorious opportunity to snatch victory from the jaws of defeat though when a deflected shot from Dean Cummins rebounded into the path of Willie Groome and although it looked easier to score than miss the wing forward ballooned his shot over the bar and the full time whistle was blown from the resulting kickout.

You could tell Philly Wolfe had Carbury up for this from the beginning and they went into an early two point lead with scores from Andy Dermody and Jimmy Dunne.

Johnstownbridge were slow to get going and after mishitting a couple of kickouts and dropping three attempts short they eventually got on the scoreboard with a Glen Doran point in the 9th minute.

Points from Dunne and Derek McCormack followed though as Carbury ran up a 0-4 to 0-1 lead inside the first quarter.

Cathal McNally was unusually quiet for much of the game but he did score to reduce the gap but again Carbury replied with Dunne getting his third and fourth points respectively as he caused the Johnstown defence a heap of problems in the opening half.

The teams then shared efforts with a free from Kelvin McNally and a point from play by Daniel Flynn cancelled out by Carbury scores from Aaron O’Neill and Tom Colleary.

Carbury looked in control but like the flick of a switch that all changed when Daniel Flynn somehow caught a ball inside from   Glen Doran and while he was surrounded by three men the Carbury defence seemed to deal with him well but referee Fergal Barry seen it differently and awarded a penalty which Sam Doran converted.

Luke Flynn was on a high from that goal and from the next attack he powered forward to point as somehow Johnstownbridge went into the break on level terms.

Johnstownbridge then had a few chances to move in front for the first time when the teams remerged but a couple of attacks broke down and Carbury latched on that opportunity with three points in a row from James Kelly, Eoghan O’Flaherty and Justin Reilly.

You got the sense that a goal at this stage would have put the game out of reach for Johnstownbridge and Carbury nearly had it in the 40th minute when Willie Groome broke clear and passed off to James Kelly and his shot looked destined for the bottom corner but a despairing Keith Cribbin somehow kept it out.

That proved to be a real turning point as seconds later Johnstownbridge had the ball in the net when Glen Doran fired home but unfortunately for him it was disallowed and brought back for an earlier foul with his brother Sam knocking over the free.

Sam then brought his tally to 2-1 for the day when a blistering counter attack downfield resulted in the diminutive corner forward finishing on the rebound after Wayne Cummins originally saved from Niall Vaughan.

Mark Cully was on as a Carbury sub and he equalised in the 49th minute with a grandstand finish in store.

Glen Doran and Eoghan O’Flaherty then swapped points before Johnstown got goal number three with only six minutes left as Luke Flynn used his pace to break free and when he gave the ball off to Daniel Flynn nothing seemed to be on but in his own way he managed to work the ball through the eye of the needle and into the top corner.

To their credit Carbury responded with points from Dermody and Eoghan O’Flaherty but Luke Flynn seemed to settle things with a 65th minute point.

The game still wasn’t over at that stage though and there was still late drama ready to unfold as in the last attack Dean Cummins had a shot for goal but the deflection landed straight at the feet of Willie Groome and with the goal gaping he blasted over as Carbury’s big chance came and went.

The final whistle blew afterwards with Johnstownbridge relieved to be in the last eight while Carbury must ponder over the winter what might have been.