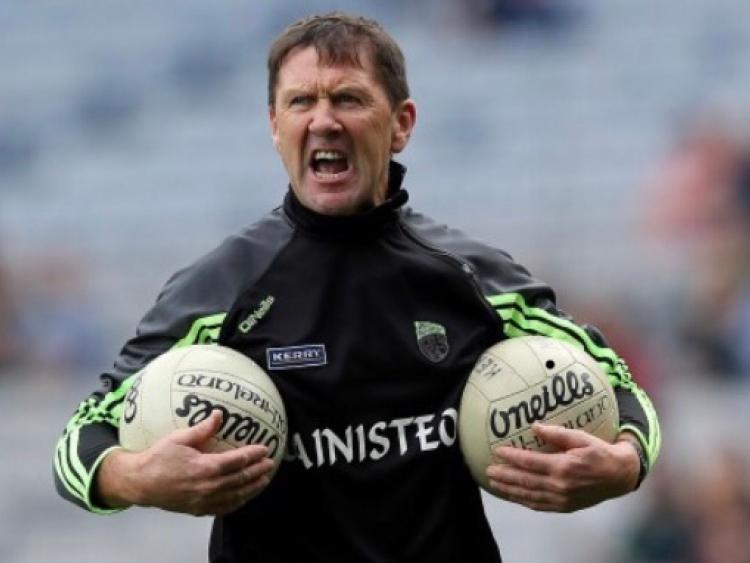 A week has come and passed since Jack O’Connor’s appointment as the new manager of the Kildare Senior Football team and already he is eager to get going.

Speaking to the local media publicly for the first time the former three time All Ireland winning manager with Kerry laid his plans out on the table as he comes in to replace the departed Cian O’Neill.

After recently retiring from his day job in teaching he has plenty of free time on his hands and despite it being a tough challenge its something he’s ready to face head on.

“I’m looking forward to it being honest with you”.

“I have plenty of energy and enthusiasm towards it as I retired from my teaching job in May so it’s the first time I’ve had a job to do something like this properly so looking forward to it in a big way”.

“I’m at a time of my life where I like a challenge as it keeps me motivated and when I went in with Kerry in 2004 people thought I inherited a team of superstars but they kicked five points in 2001 against Meath in an All-Ireland Semi-Final, were then beaten in a final in 2002  and lost by six points to Tyrone in another Semi-Final in 2003 and you couldn’t say that was great form and we did great things and I was under pressure a lot so I feel I have much more experience now to do this job”.

“The consideration was the logistics of it as Kerry is a long way from Kildare but I’ve been used to coming up and down anyway over the last few years being involved with Moorefield and Eanna and Cian both live up here so I’m used to that aspect”.

Kildare will reside in Division 2 when the new boss starts competitive action at the back end of the year and getting promoted is something he'd like to achieve but as well as that getting the best players back playing for the County is also a priority.

“I just feel that particularly last year with the players that Kildare were missing realistically they couldn’t put their best foot forward without them so we will be endeavouring to get the best players from Kildare making themselves available for the panel and take it from there”.

“It will be top of the whole management teams agenda to get all the best players playing for Kildare so you know lads can opt out for different reasons with a number of them being young and they haven’t settled in their pattern of life yet and they may need to get it out of the system by going travelling and stuff and that’s fine as everyone has to get their own priorities right but as I say we certainly want the best players involved with us”.

“Kildare are in Division 2 and that’s not really where you want to be as you want to try and get into the top Division and compete with the big boys”.

“Hopefully we can get on a run aswell that can get us back to Division 1”.

“There are two good teams coming down from Division 1 in Cavan and Roscommon so we know it’s not going to be easy and very competitive and sometimes it can be harder to get out of Division 2 than to stay in Division 1 and that’s a fact but long term that has to be a priority as ultimately you have to be swimming with the big fish and we will be putting a lot of emphasis on getting promoted”, said O’Connor.

Ross Glavin and Tom Cribbin are the two selectors he has brought in with him and despite a few murmurings with regards some Kerry representation there is no plan to extend that at the moment and he hopes to have everything fully sorted in that regard in the next few weeks.

“It’s not my intention at the moment to extend the Management team anyway but you’ll never say never and I think three is a good number as sometimes decisions need to be made quickly on the sideline and if you have too many people maybe that decision gets delayed and I’ve got good trust in the two lads.

“We have begun the process with regards to our physio and strength and conditioning coach aswell and we hope to conclude that process in the next few weeks as backroom sizes have increased since I was last involved so there is a few bits and pieces to fix up but we are making progress there and we should have something together in the next few weeks”, the Kildare manager admitted.

Style of play and long term planning are two things that O’Connor touched on and you could sense the excitement in his voice as he knows he has the raw materials for a good side on paper.

“Every year you are involved with a team you set out to do the best that you can and with any team I was involved with in Kerry we always tried to play attacking football but the game is constantly evolving and it depends on who you are playing”.

“If you go all out attack on a defensive team you can get exposed like the way Dublin did against Donegal a few years ago and that lesson has stood to them since. It was a seminal moment for them”.

“You are always thinking of long term and to that end you would certainly be including younger players and maybe not to be ready for this year but even two or three years after that”.

“I’d look at it that way and you try to be successful every year you go at it but you are always looking at the future by incorporating youth into the panel but you can do both if possible”.

O’Connor and Tom Cribbin have been keeping an eye on the Club Championship as has Ross Glavin in his role as the Moorefield manager and they will continue to do so over the next while as they try to put together a list of players capable of playing for Kildare.

“There’s no hard or fast rule with regards to picking players and we will see what shows up in the Championship and obviously there is a hardcore of players there from last year and the Championship always throws up a couple of players as I remember when I was involved with Moorefield two years ago and Kevin Flynn stood out so you will always find a few”.

“We will see where we are going in a month or six weeks time and if we need to have a trial to just make up our mind we will do that before picking an initial panel”.