A place in the semi-finals at stake 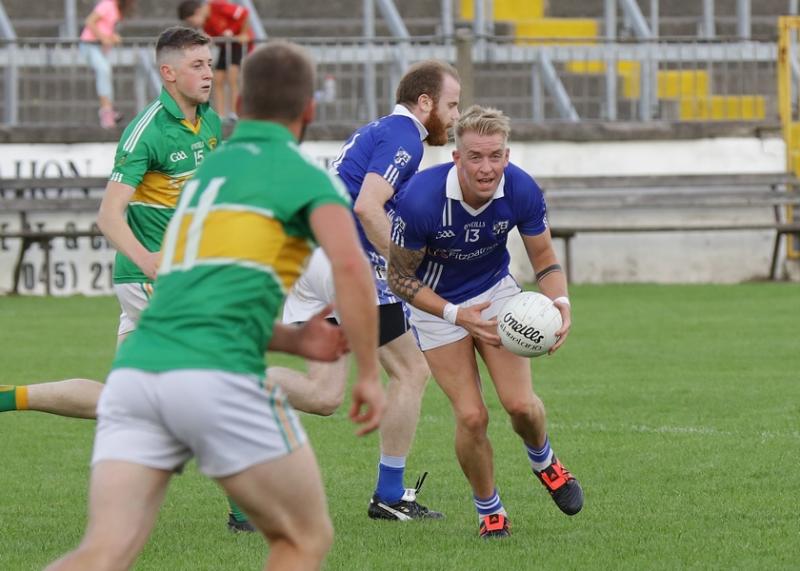 Monasterevan and Kilcock will meet for the second time in as many weeks in Manguard Plus Hawkfield on Sunday afternoon. Photo: Pat Tinsley

As a result of the All-Ireland Senior Football Final involving Dublin and Kerry it’s an early start in Hawkfield as Clogherinkoe and St.Kevins meet for the second time in as many weeks.

Clogherinkoe won the original contest on a 2-16 to 1-7 scoreline but St.Kevins are very much a different animal now.

Clogherinkoe remain one of the favourites to capture the coveted title in a couple of weeks time after they won all their group games.

With all due respect to Ellistown and Rathangan they would have been expected to get over both those sides and they did with ruthless aplomb with the Ellistown game in particular seeing marquee forward Jack Robinson starring.

Its far from a one man show however as the Kildare Junior side was heavily backboned by Cloughs players with Gavin Scanlon, Daniel Grehan and Mark Nolan all involved and with Cein McMonagle also in the team they are a pretty formidable outfit.

Kevin’s are a different side since that opening round game though and after winning their last two games in the group they went up a level against Ballyteague last weekend.

That Pre-Quarter Final was tough to call on paper but Kevin’s were emphatic in their eleven point success with Barry Noone and Declan Flaherty leading the scoring.

Like Clogherinloe Noone, Flaherty, Ryan Casey and Mark Grace were involved with the County Junior side that reached a Leinster Final and as they say familiarity breeds contempt.

It will be much closer than the first outing but Clogherinkoe look like they have something about them and it will be a shock if they don’t come through.

The culmination of the last two beaten Intermediate finalists is the tie of the round as Division 3 League Champions Monasterevan take on Kilcock.

In 2017 Kilcock were defeated by a fast finishing Raheens while Two Mile House had a bit to spare over Monasterevan last term.

In some ways this game would be fitting of a County Final but even at that the winners will get a fair jolt of confidence for the next round.

Brian Lonergan’s Monasterevan were 2-6 to 1-8 winners over the same opposition a couple of weeks ago with Padraig Nash only playing half of the game.

It was a tight encounter but it lacked in quality for periods although the returning John O’Toole did score an exceptional 1-1 on his return to the winners side.

Kilcock were very wasteful and Shane O’Rourke had a rare day off on the frees so if they improve that efficiency they have every chance.

Monasterevan are still without Wayne Fitzpatrick who lit up last year’s run as he is still on Defence Forces duty and while they haven’t missed his influence as of yet it could all change on Sunday.

Monastervan are a lot of people’s tip to go all the way and they have the X Factor in Nash, John O’Toole, Ryan Bannon and Paul Maloney but Kilcock have serious players themselves and come in with great momentum.

This will go right to the wire but if Shane O’Rourke and Daragh McArdle can repeat their heroics of last Monday night when they scored 1-10 between them against Milltown they have a real shot and they can go one step closer to making up for two years ago.

As well as Hawkfield there is also an appealing double header in Conneff Park Clane which kicks off with the meeting of Leixlip and Straffan.

It is the third rematch of four in the Quarter-Finals with Leixlip aiming to repeat their 3-18 to 2-7 victory from a couple of weeks ago at the same venue.

In theory it should be very difficult to overturn a fourteen point success and that is right but like a lot of teams after an early defeat Straffan have improved with three wins since then.

A one point win over Nurney caught many by surprise while an easy local derby victory over Kill set them up for a tilt at Rathangan which they passed with flying colours last weekend.

A 2-11 to 0-6 victory tells you they are in good shape and they know they will need to be near their best on Sunday afternoon and the likes of Rob Kelly, John Tracey and Austin Allen will have to be at peak form if they are to get a result.

After rather unluckily going through the trapdoor last year Leixlip have been faultless throughout this year’s campaign.

Despite eventually going down they competed well in the top division of the Senior Football League and that has set them up for their clashes to date which they have got by with a minimum of fuss.

Its hard to know they are really at as they haven’t played any of the real big hitters as of yet but that is a discussion for another day as led by Tommy Moolick they should have enough for Straffan on Sunday.

The last of the weekend meetings is the clash of Allenood and Sallins on Sunday afternoon where a big crowd is expected.

The group game between the two was a very competitive affair with Brian McGrogan’s Allenwood only pulling away near the end.

After a poor year on return to this grade last term Allenwood have shown much improvement in a season that started with victory in the Keogh Cup.

That victory has been the springboard to a decent League and a flourishing Championship campaign that has seen them beat Suncroft and Milltown as well as Sallins.

The influx of youth has certainly helped to with the likes of Billy Maher, Darragh Malone and Mark Byrne seeing their scoring totals increase.

As with any team its all about the balance though and they are full of experience and you will go far to find a more able midfield than Johnny Doyle and Johnny Byrne while Mark Delaney and Mark Hogarty keep it solid at the back.

2019 has also been fruitful for Sallins as after promotion to Division Two they are back in a quarter-final for the first time in a few years.

They lost to Allenwood by five points in that original fixture but the scoreline probably flattered Allenwood and Sallins will come in here with plenty of confidence.

Last weekend looked a big test for them when they were faced with the defensive style of Nurney but after a nervy opening they eventually found out their opponents winning on a 0-15 to 1-9 scoreline with Conor Herbert top scoring with 0-7.

Herbert along with the likes of the Sharkey brothers and Paul Farrelly are big players for Sallins and they are capable of winning if in top form.

Still though the safe bet looks Allenwood and the scoring prowess of Maher and Malone is hard to ignore and in a tight game the Blues may just have enough at the end.