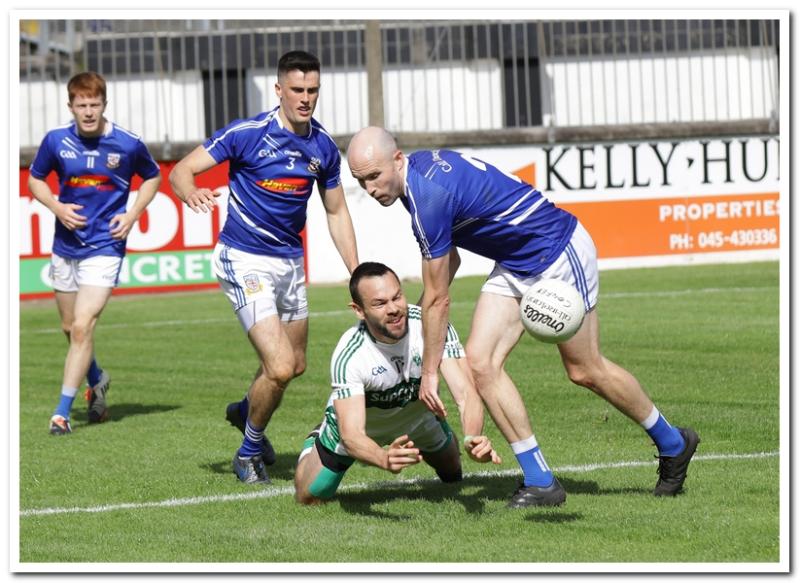 The scoreline wasn’t as much as their previous meeting but the result was still as emphatic as Celbridge eased to a thirteen point victory over Confey in the Senior Football Championship Quarter-Final.

Confey were somewhat competitive to begin with but aided by a 6th minute Kevin O’Callaghan goal Celbridge eventually raced clear.

Paul Curran’s team led by six points at half-time and with Confey only scoring one second half point the result was academic.

Davy Hughes got Celbridge’s second goal and without ever over extending themselves they ran out facile victors.

Both Hughes and Paddy Brophy heavily scored for Celbridge but one worry for them will be Kevin O’Callaghan as he went off with a serious looking ankle injury in the opening half.

An early start and two North Kildare clubs providing a small enough crowd was hardly ideal but Celbridge as expected showcased their superiority from the beginning with a free from Paddy Brophy followed up by Kevin O’Callaghan kicking in a goal after initial great work in the build up by Brophy as he passed off for the big full forward.

Confey didn’t drop the heads though and three points on the bounce had them within a point as Niall Carney and James Gately kicked scores.

O’Callaghan then went down with an ankle injury and had to be taken off but it didn’t overly affect his side as they scored four on the bounce afterwards with Brophy, Davy Hughes and Tony Archbold all finding the target.

Hughes was a big threat all game with his trusted left peg but he almost palmed in a goal in the 18th minute when his effort rebounded off the crossbar.

The corner forward then kicked two points before the break and although Gately and Conor Jennings hit back the ever dependable Fergal Conway soon resumed parity with a typical point on the run that enabled Celbridge to lead 1-8 to 0-5 at the change of ends.

Confey got the deficit back to five with Niall Carney’s third free in the opening minute upon the resumption but instead of being a momentum shifter the opposite occurred as they went scoreless for the rest of the game.

As a result Celbridge had a comfortable final half an hour without ever going through the gears and points from Hughes and Brophy who between them finished with 1-10 gave Paul Curran’s side an eight point cushion.

Kevin Flynn didn’t want to be left out and he fisted over from near the endline minutes later as he continued his return to form after missing out on most of the year.

The game drifted for much of the last quarter and it was only lit up with a fine Brophy free from distance and with six minutes left Hughes fired in a deserved second Celbridge goal that put the seal on the 2-13 to 0-6 result but they know themselves a much bigger challenge awaits in two weeks time.