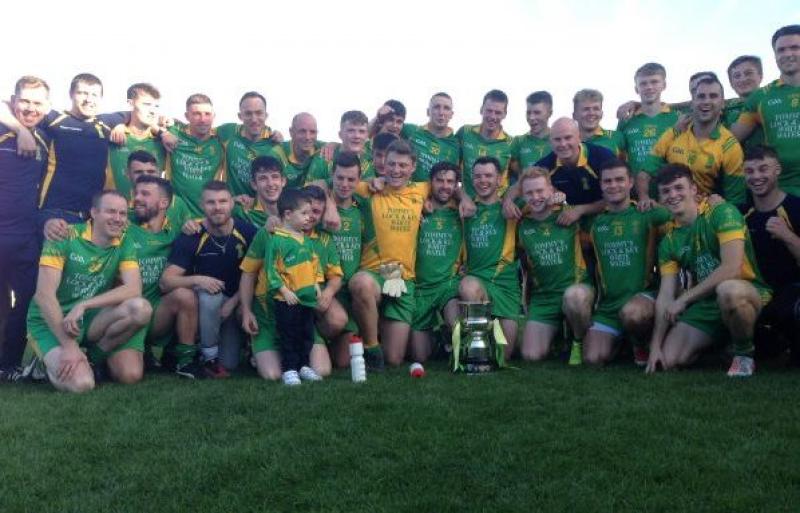 For the second time in three years near neighbours Caragh and Robertstown meet in a big local derby for a place in the Tom Cross Junior Football Championship Final.

That day belonged to Caragh as Jake Corrigan went to town on the Robertstown defence in a high scoring victory and they will enter this afternoon as favourites aswell.

The Prosperous based outfit have had a dream year so far as they secured promotion from Division 4 in the Senior Football League before subsequently beating Rheban in a refixed League Final.

The Championship has gone smoothly too and they are still unbeaten after four wins from four in their Group and while they would have been expected to defeat the likes of Ardclough, Castlemitchell and Grange the win over the 2017 Champions Ballymore Eustace certainly made people stand up and take notice.

Robertstown have been at this stage for the last two years but have fallen on both occasions so they will be desperate to get over the line and like Caragh their formline is on an upward trajectory and despite losing to Rathcoffey by a point in May they finished in second spot in Section B.

One of their main men from the last few years Aidan Dunne has stepped back into the managerial role and after some experience with Scoil Mhuire Clane it’s a role he’s fulfilling well and since that Rathcoffey defeat he’s overseen his team win three games on the trot against Rheban, Ballykelly and Cappagh.

The victory against Rheban was the real crucial one as they would have been seen as the main threat with themselves for a top two finish and Danny Scully and Joe Kavanagh turned on the style in a six point victory.

Robertstown have got goals in every game with Scully and Kavanagh running riot in some cases but Caragh are probably the best team they have faced and while they may not be as free flowing as their opponents the 2017 finalists are pretty solid.

If Robertstown’s attack clicks into gear they have every chance but the logical thinking is that Caragh will be able shut down at least one of that dynamic duo and in a tight affair that could be crucial to the result.

After suffering immediate relegation back to the Junior Championship after their sole season at Intermediate level Ballymore Eustace find themselves sixty minutes away from a second final in three years.

From the outset the 2017 winners have been seen as hot favourites to land the Junior Crown and while that remains the case the road hasn’t been as smooth as it was two years ago.

The team they beat in that final was Caragh and the side in Maroon and White defeated them by a point earlier in the Group stage so they had to be content with second place in the standings.

The team still has a strong look to it with Mark Barrett, Caolan Halpin and Joe Broderick leading a string spine and up front the likes of Niall and Simon Murphy as well as Shane Barrett leading the line.

Despite the Caragh setback they are still in decent shape ahead of today’s meeting with Rathcoffey.

Rathcoffey come in on a crest of a wave after going unbeaten so far this year so Ballymore will need to be on their game.

They drew with Rheban later on but wins over Cappagh and Ballykelly ensured they finished top of the pile.

Their main scorer in chief is Jason Acton who is back after being sidelined in 2018 with a cruciate ligament injury and along with both Adam and Joey Toman they lead the line well up front for Rathcoffey.

Add in the likes of Evin McGovern, Brian and Cathal Travers to Sean Moriarty and Philly Doyle and you have a good mixture of youth and experience.

Rathcoffey have done well to get this far but Ballymore are a serious outfit at this sort of level and barring a shock they should return to another final.