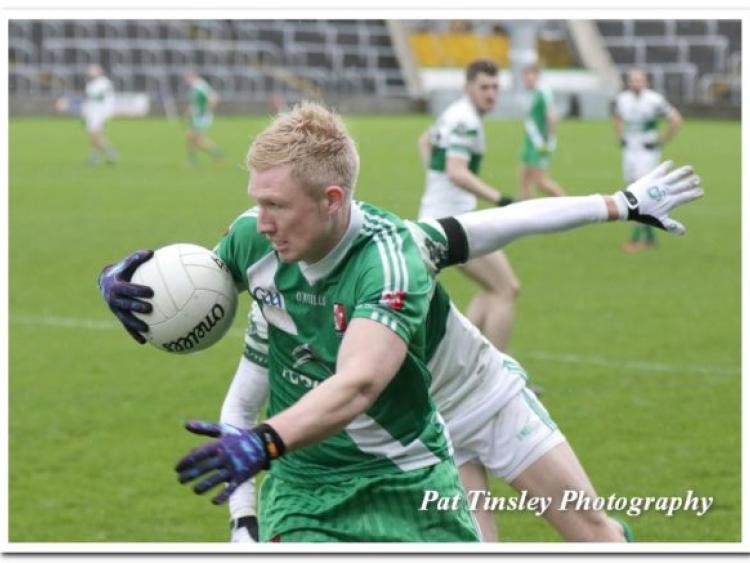 Sarsfields with the help of five goals booked their place in the Semi-Finals of the Senior Football Championship with an eight point success over Eadestown in St.Conleths Park on Sunday afternoon.

Ray Cahill got a brace of goals in a performance that saw him finish with 2-3 whereas Shane Doyle, Robbie Confrey and Conor Hartley got the other three pointers.

The game was a repeat of the group stage meeting which the Sash came out on top in and they achieved something along similar lines here.

Despite the winning margin they weren’t without their wobbles with Eadestown getting two goals themselves and Sarsfields goalkeeper Paddy O’Sullivan pulled off two great saves when there was only six points between the teams.

The sides were level at 1-3 each at one stage of the first half but two quickfire goals from Ray Cahill effectively turned the game in favour of Davy Burke’s men.

On a dreadful afternoon for football Sarsfields got the scoring up and running with the returning from injury Ben McCormack splitting the posts from out wide.

That was the ideal start for the Sash but they couldn’t build on it initially as Eadestown showing no fear kicked over three points on the bounce with a pair of frees from Cian Bolton coming either side of an effort from Conor McCarthy.

Ray Cahill reduced the deficit with a free from distance and the Newbridge side were back in front by the ten minute mark when a beautiful crossfield ball from Declan McKenna found Conor Hartley in space and the wing forward with the shiny orange boots slotted a shot into the bottom corner.

Cahill followed up with his second free of the half and the Sash were in the driving seat leading 1-3 to 0-3.

That safe comfort blanket didn’t last long though as the Eadestown goal threat showed its colours again with a 22nd minute goal where Conor Doherty had a shot well saved by Patrick O’Sullivan before Conor McCarthy pounced on the rebound to score.

Liam McLoughlin’s side couldn’t build on that though and Sarsfields rattled off 2-3 without reply before the end of the half including two goals in as many minutes.

Points from McCormack and sub Shane Doyle arrived back to back and while Doyle also pulled a goal attempt badly wide Ray Cahill more than made up for it with a pair of goals.

The first arrived in the 29th minute when Declan McKenna was brought down in the square and the full forward slotted the penalty into the bottom corner and barely sixty seconds later he scored again when Doyle and McCormack combined before setting him up.

Doyle then rounded off the scoring in stoppage time as Sarsfields went into half-time with a commanding 3-6 to 1-3 advantage.

A point from Eadestown full back John Lawler in the opening minute of the second period gave rise to hope of a comeback but when Doyle brought his tally to 1-2 when he cooly netted past Mark Murphy on the back of an inside pass from Declan McKenna.

As a result Sarsfields were thirteen points clear and that should have been that but instead of coasting clear they went through a scoreless fifteen minutes in which Eadestown scored 1-4.

Bolton landed three of those four points and and after a Conor McCarthy free in the 43rd minute Conor Doherty kicked in a goal to leave just four points between the sides.

Sarsfields pushed the lead back out to six when Cahill and Colm Hartnett pointed and if it wasn’t for a couple of brilliant saves from Paddy O’Sullivan we could have had a grandstand finish.

As it stood a mix up in the Eadestown defence when Calum Fitzsimons underhit a backpass to his goalkeeper Mark Murphy resulted in Robbie Confrey going round the stricken stopper to get the fifth Sash goal.

Bolton added on his sixth point of the game in response but it was academic as Sarsfields booked their place in the semi-finals with a 5-8 to 2-9 victory.