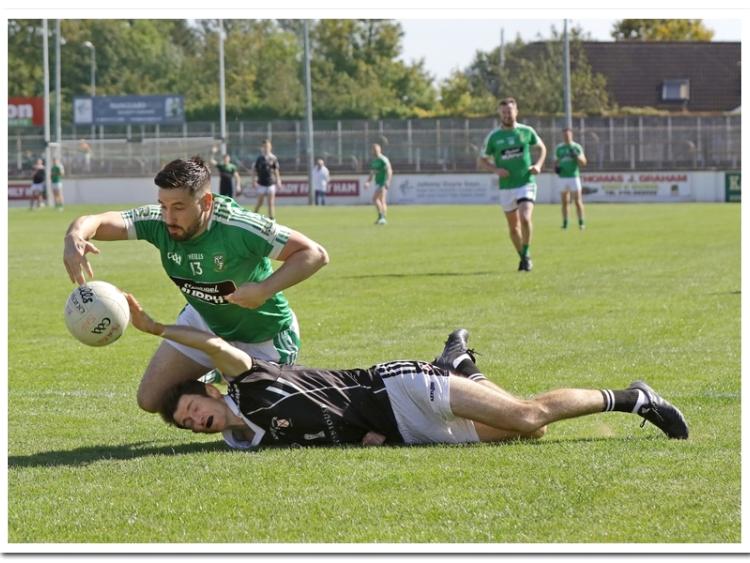 After going through a series of patchy performances Moorefield refound their mojo as they gave Maynooth a twenty point beating in the Senior Football Championship Quarter-Final in St.Conleths Park on Saturday afternoon.

Moorefield led 0-7 to 0-2 at the break but it was in the second half where they really turned on the style as Sean Healy, Cian O’Connor and Ciaran Kelly all found the net.

All three goals came after the 58th minute and put something of a gloss on the scoreline but even still Ross Glavin’s team were miles the better side and never really got out of first gear.

Maynooth’s performance was very disappointing and they looked like a side that was just happy to get that far and their feeble attack and scoring tally would align in that direction.

Neil Flynn has led the Maynooth scoring for the season but after he failed to score from play that pretty much summed the whole thing up.

In a rather poor first half Moorefield went 0-3 to 0-0 clear after only six minutes when a pair of scores from Adam Tyrrell was followed by a rare free from Niall Hurley Lynch.

Maynooth got on the board in the 8th minute with a point from Ruadhan O’Giollain but it was a rare foray into Moorefield territory.

Tyrrell was looking very sharp for the County Champions and although he screwed a routine looking free passed the post he made up for it with a pair of converted placed balls.

This came in a period of Moorefield scoring four points in a row with further scores from Mark McDermott and Hurley Lynch giving the Moores a six point cushion.

Maynooth then finished the scoring for the half with well taken effort from play by Danny O’Sullivan that left Moorefield leading 0-7 to 0-2.

John McAndrew reduced the gap to four at the beginning of the second half but that was as good as it got with Moorefield taking complete control in adding on six points in a row to go ten clear.

McDermott also pointed but he would have preferred a goal as he rifled a shot goalwards but the ball went over after hitting the bar originally.

In a strange turn of events Moorefield also lost two players when both Kevin Murnaghan and Anthony Durney received black cards for fouls on Neil Flynn with Durney’s off putting after he only entered the field a few minutes earlier.

Flynn picked himself up from those incidents and soon kicked back to back frees to leave the score at 0-13 to 0-5 but that was Maynooth’s final point of the contest.

Moorefield finished in style with Callaghan who has scored well over the last few games getting two further points either side of Sean Healy powering a shot to the net after being aided by a deflection.

Tyrrell then pushed his tally out to six points for the day before Cian O’Connor and Ciaran Kelly kicked Moorefield’s second and third goals.

Referee Kieran Harris blew his final whistle soon afterwards to put an end to Maynooth’s misery as Moorefield get ready to prepare for a County Final rematch with Athy.