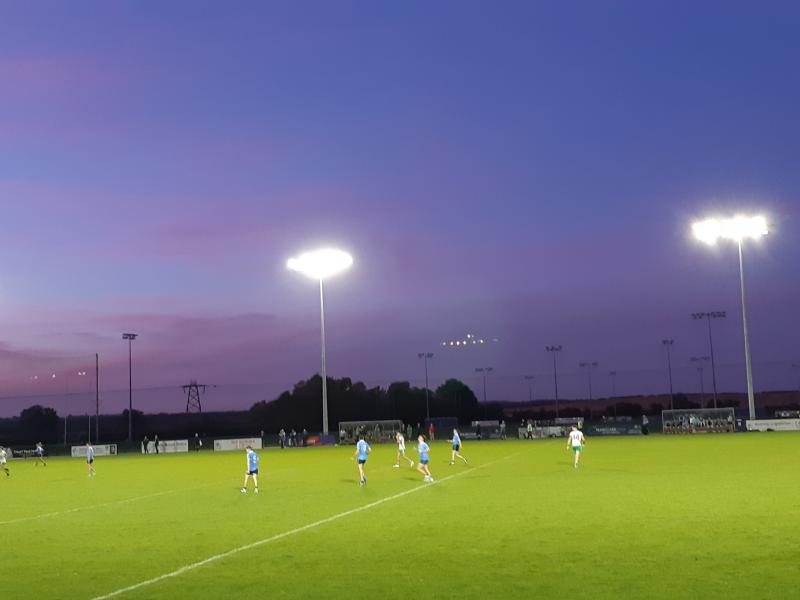 A 66th minute point from Jack Sharkey was enough to seal the deal as Sallins shook off Allenwood in an eventful Intermediate Football Championship Quarter-Final Replay at Manguard Plus Hawkfield.

Sharkey’s effort was the last kick in a game that looked destined for extra-time and its one that Allenwood will look back on with huge regrets.

Not only will they question the amount of stoppage time played but ten missed scoring opportunities in the first period and a further four more when dominating late on eventually told.

Sallins raced out of the blocks and goals from Fergal Swan and Conor Herbert had Paul Drewett’s men leading 2-3 to 0-2 but they were largely on the backfoot in the second period when an Aaron Dunne point levelled up matters in the 59th minute.

Allenwod’s Billy Maher gave them the lead for only the second time at the start of the stoppage time but Sallins found a second wind and scores from Adam Kane and Sharkey put the seal on a dramatic success.

After letting a three point lead slip in the original game Allenwood made a bright start with Johnny Byrne opening the scoring for the Blues.

Darren Judge then had a chance for goal when he received a pass from Billy Maher but the corner forward’s shot was expertly saved by Sallins stopper Daniel Sweeney.

Sallins equalised in the 4th minute with a Conor Herbert free and that same player soon had the game’s opening goal when a ball inside from Fergal Swan broke rather fortunately to him and he raced away from Mark Delaney before slotting the ball under Ernie Price.

Sallins were opening the Allenwood defence up at will at this stage with Paul Farrelly having another shot at goal tipped over.

Allenwood replied with a Darren Judge effort but Sallins were rampant and a flowing move involving Farrelly, Cian Sharkey and Ben Caulfield ended with Fergal Swan palming a shot to the net and all of a sudden there was six between them.

That became seven when Kevin Foley punched over and Allenwood looked in a lot of trouble.

Allenwood retaliated with scores from Judge and Byrne but their wastefulness in front of goal was costing them with Judge, Darragh Malone and Billy Maher all guilty of missed opportunities.

Kevin Foley’s second point of the half had Sallins leading 2-4 to 0-4 approaching the interval but Allenwood did at least remain in touch when Byrne who almost single handledly kept his team in the game and Johnny Doyle scored to leave four points between them at the change of ends.

Doyle reduced the deficit at the start of the second half but Sallins with a flowing counter attack saw Jack Sharkey point from play and when Herbert did likewise from a free there was five points between them.

Sallins fell into their shell a little from there though and didn’t score for twenty five minutes as Allenwood piled on the pressure.

Doyle showed all his class in kicking three of the next four points with two from play and with Darragh Malone also splitting the posts only the minimum separated the teams.

Allenwood looked primed to strike from here but it was a slow burner as Doyle pulled a few frees wide but eventually with one minute left on the clock Aaron Dunne latched on to a break and swinged over the levelling score.

Billy Maher was extremely quiet by his standards up to then but he looked like he was the match winner when his 61st minute effort crept Allenwood in front.

That score seemed to wake Sallins from their slumber and when sub Adam Kane fisted the equaliser we looked set for another twenty minutes of action.

Foley and Maher then both missed chances to win it but Sallins still had one last attack and they took it with both hands with Jack Sharkey kicking a brilliant score from out wide and from the resulting kickout the final whistle blew as a jubilant Sallins side booked a last four spot with Leixlip.