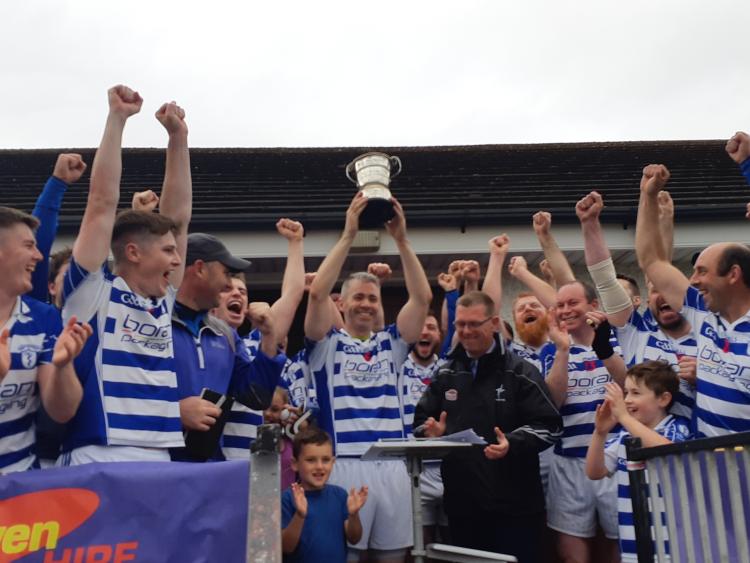 Declan Carroll got all but three of Naas’s points as they ran out two point winners over Broadford in the Junior Hurling Championship Final at St.Conleths Park.

Carroll who formerly played Senior Hurling with Dublin finished with 1-10 in total as Naas claimed a first Junior Crown in over twenty years.

Naas looked to be cruising when a Carroll goal had them 1-8 to 0-6 ahead in the opening minutes of the second half but the introduction of David Ryan helped Broadford back into the game as he scored 1-3.

Broadford could never quite get their noses in front though and points from Carroll and John Gavignan eventually settled the game in Naas’s  favour as Broadford missed a couple of late chances.

Broadford were lining out with a number of footballers from both Johnstownbridge and Clogherinkoe and they showed all their skills with the feet when late entrant to the team Aaron Smyth kicked an opening minute score.

Naas replied in the following two minutes with back to back frees from Emmet Carroll but Broadford were right in their opponents faces and the team on the Meath Border went level and retook the lead with efforts from Caelum Flanagan and Dean Hanley.

Bernard Reilly’s Broadford outfit were 0-3 to 0-2 to the good as a result but Naas weren’t behind for long with a lovely point near the sideline by John Gavigan bringing the sides level for the third time.

The forecast rain then began to fall in St.Conleths Park but Hanley was proving ice cool on the frees and a shot from the middle of the field as well as Mikey Barrea striking from a difficult angle ensured Broadford were back two points clear.

Naas did look an ongoing threat in attack though and after Carroll knocked over his third free in the 20th minute he found the net only a couple of minutes later as full forward Alex Maher showed great pace to evade the stricken defenders and layoff for Carroll to power a shot home.

Carroll and Hanley both added to their free tally before the half was up as Naas went into the break leading on a 1-5 to 0-6 scoreline.

Naas maintained their superiority at the beginning of the second half with three unanswered points as a couple of Carroll frees came the other side of a well worked Ben O’Reilly score from play.

Naas looked in control five points to the good with six minutes of the second half played but Broadford turned to sub David Ryan and his introduction proved a masterstroke as the full forward quickly garnered 1-1 after coming on.

Ryan firstly knocked over a point from a difficult angle in the 38th minute and he then found the net just two minutes later when a run from Luke Flynn where he shipped a few challenges ended with a pass to Ryan and despite the best efforts of the Naas defence he scrambled the shot past Sean Whelan.

That left just the point separating the sides but Hanley soon changed that with a free to leave the sides deadlocked at 1-8 each entering the final quarter.

Carroll was brilliant but he was practically leading a lone furrow up front for Naas and he added on three more points to give his side the lead again after they cancelled out Broadford efforts from Ryan and Luke Flynn.

Broadford then had a chance for goal when Flynn again caused chaos before assisting Mikey Barrea but he mishit his shot and the danger was averted.

Carroll with a 65 doubled the Naas lead to two points in the 52nd minute but Broadford were very stubborn with Ryan knocking over his third point of the half.

Dean Hanley had a couple of chances to at least get level in the dying minutes but they all went amiss and John Gavignan put the seal on the Naas success with a stoppage time insurance score.