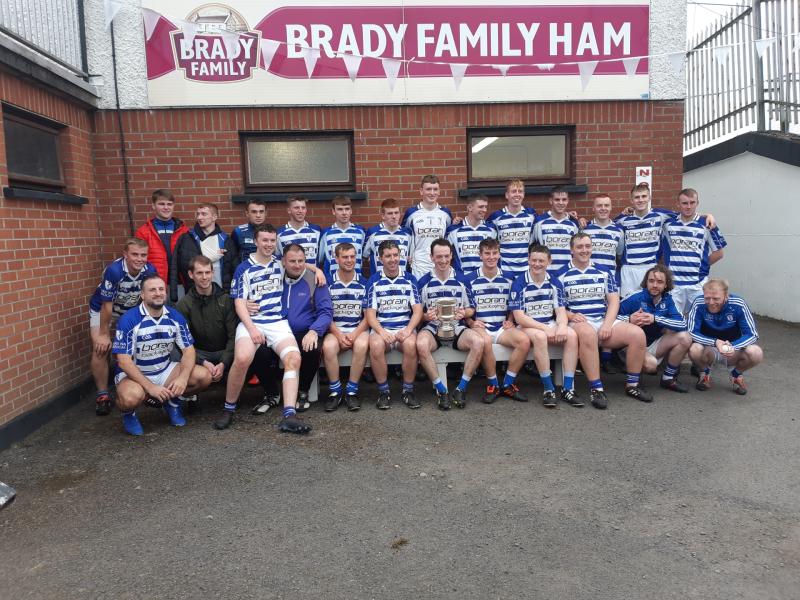 Naas completed a League and Championship double for the third consecutive year as a battling second half performance got them over the line against Maynooth in the Intermediate Hurling Championship Final.

In what was a closely fought affair for the majority second half goals from Richie Ryan and Emmet Carroll who already starred in the Junior decider helped them seal the deal.

As well as Carroll and Ryan, Rian Monaghan also found the net in the first half which helped keep them in touch with Maynooth after they went seven ahead at one stage.

As well as the scores from play Eoin O’Hehir was uber accurate on the frees as he finished with 0-8 but for Maynooth it’s another final they will feel they let slip as they were 1-5 to 0-1 ahead at one stage and if they didn’t concede that Rian Monaghan goal just seconds after Kevin Dunne’s effort then the result could have been different.

In a high tempo end to end clash Maynooth started the better and moved into an early two point lead with scores from the brotherly duo of Tadhg and Cian Forde.

Eoin O’Hehir responded with a free from distance but Maynooth were near top form in the opening ten minutes and another 1-3 without reply moved them seven points clear.

Tadhg Forde with his second from play, Matthew Melia and Graham Kenny got the points while a careless mistake from Sean Burke in the Naas goal allowed Kevin Dunne to pounce and find the net.

Dunne’s opportunistic effort arrived in the 10th minute but barely sixty seconds later when the game threatened to be getting away from Naas Rian Monaghan got a goal when placing past Sean Behan on the back of a pass across the field by Luca Conroy.

A pair of frees from O’Hehir followed and Naas had the deficit down to two points by the halfway mark of the half.

Cian Forde with his second converted placed ball of the half extended Maynooth’s advantage to three in the 16th minute but Naas were slowly but surely finding their feet and two more O’Hehir frees kept them in touch.

Naas also saw Ian Blackburne lash a shot into the sidenetting from a difficult angle but in the aftermath Maynooth owned the ball for a period and although Cian Forde missed a couple of chances he did score a 65 to increase his side’s advantage.

Naas thought they had their second goal when Luca Conroy shot past Behan at the beginning of stoppage time but the ball was adjudged to have gone wide earlier in the move and it was disallowed but the three in a row chasing County Town weren’t down for long with Ian Blackburne and Richie Ryan levelling up the game by the break.

The second half wasn’t as chaotic to begin with anyway with Naas outscoring Maynooth 0-4 to 0-1 over the first quarter as O’Hehir x3 and Rian Monaghan from play pushed Naas ahead.

Maynooth replied via Cian Forde with another free and Kevin Dunne nearly doubled his goal tally but he had a shot well blocked.

That missed opportunity was keenly felt a couple of minutes later when sub Emmet Carroll who scored 1-10 in the curtain raiser Junior Final emerged to get a goal in this game aswell when he turned his marker before finishing and that enabled Naas to coast clear on a 2-10 to 1-8 scoreline.

Over the next few minutes Maynooth got back within arms length of Naas with points from Dunne, Tadhg Forde and Fergal Molloy but again just as Maynooth got close the winners went up a gear.

O’Hehir got his eight point in the 52nd minute to end his scoring for the day and the game was done as a contest with five minutes left on the clock as Richie Ryan got a much-deserved goal.

Carroll added on two more points before the end and while Cian Forde knocked over a free for Maynooth it arrived much too late as Naas ran out six point winners.