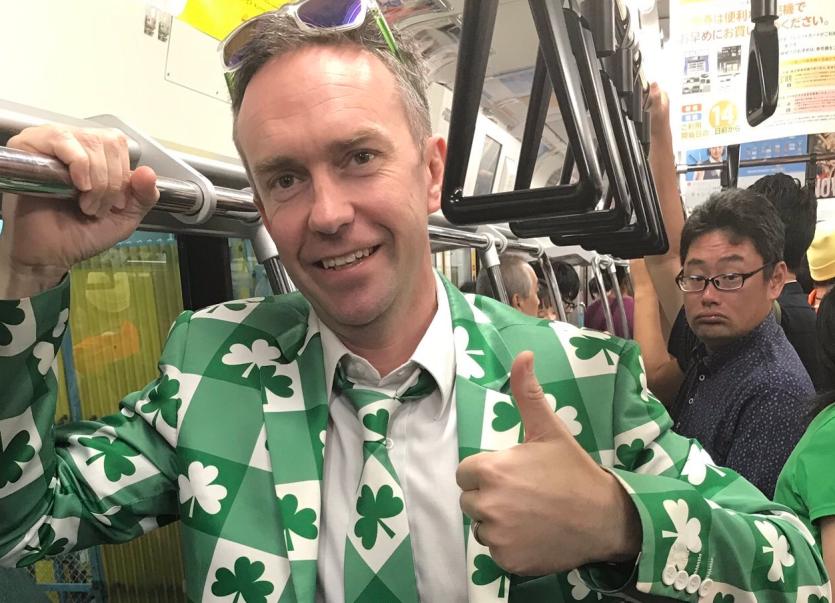 A Kildare man living in Asia is following Ireland's journey in the Rugby World Cup.
Leixlip native Declan Burke, who has been living in Hong Kong for 14 years, travelled to Yokohama to see Ireland play Scotland in their opening game.
Declan, whose family has close links to Barnhall RFC, also plans to make the trek to Tokyo Stadium for the expected quarter-final with South Africa on October 20.
Declan said: "I was really delighted to get to the Ireland game. I wore a green suit covered in shamrocks which I bought a few years back.”
He joked: "The suit has had better nights out than me!"
He added: "I have also seen the New Zealand v South Africa game in Yokohama. There is a great atmosphere around with all the fans and Japan has really embraced the tournament."
The education technology expert, who is married to New Zealand native Genevieve, has three children aged 10, 8 and 6.


Declan was part of the Barnhall team of the 1990s when he and his four brothers made up the backbone of the squad.
Backs player Declan was joined by Eoin, Conrad, Paul and Brendan.
Declan has spent several years out of Kildare with a two-year stint in Australia and two more years in Korea before settling in Hong Kong in 2005.
Declan, who has been to previous Rugby World Cups, has also played GAA with clubs across Asia.
He hopes to see Ireland improve on previous performances at the tournament in coming weeks.

Mercury set to rise as Met Eireann forecasts above average temperatures throughout July!