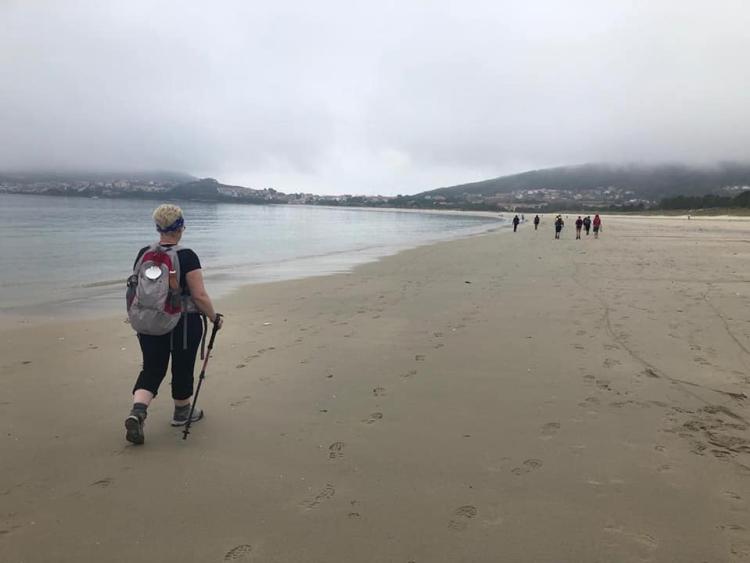 Martine Rigney completing the final stretch along the beach at Finisterre, the official end of her camino walk

Kildare women, Martine Rigney and Janet Deegan, recently walked the 103kms of the camino in Spain. The pair tackled the long walk over five days, along the stretch from Santiago de Compestello to the official finish at Finisterre (albeit the ladies walked another day after that) and have already raised €4,500 to date, with more donations still to come. 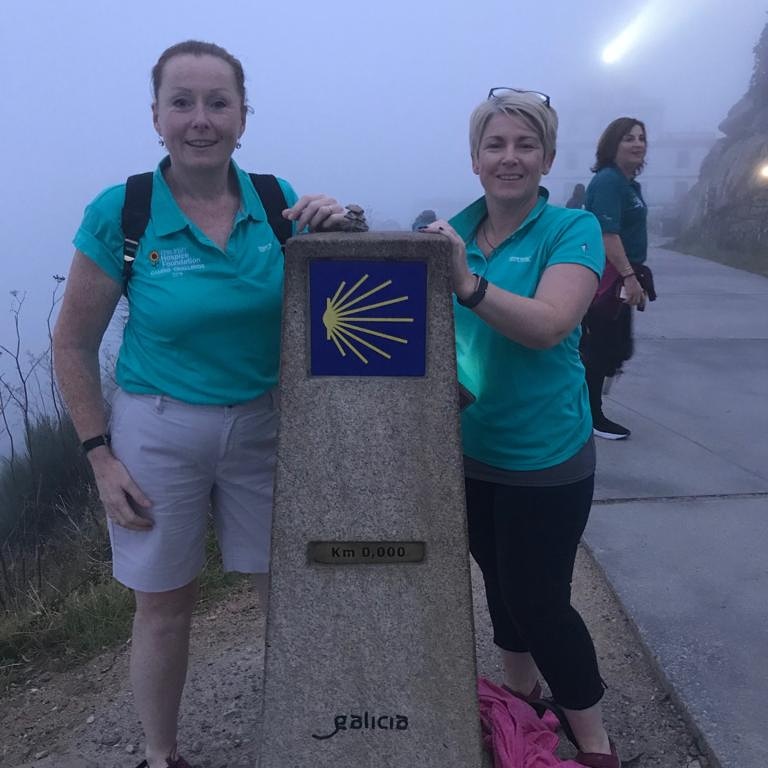 The pair above, from Ballymore Eustace, were walking to raise funds for the Irish Hospice Foundation nationwide, with monies going directly to the hospice night nurse services.

“I would like to thank everyone who sponsored us and supported this amazing cause” said Martine. “The monies raised from our camino trip will cover the shortfall of over €70,000 needed to fund the hospice night nurse service, an invaluable part of the care they provide. This service was used by my family when we needed it, when they cared for our late mother, Judy who died in 2005.

"Thank you all so much” said Martine” (who found the whole experience very rewarding and emotional (save for the a few blisters at the end of the walk!). 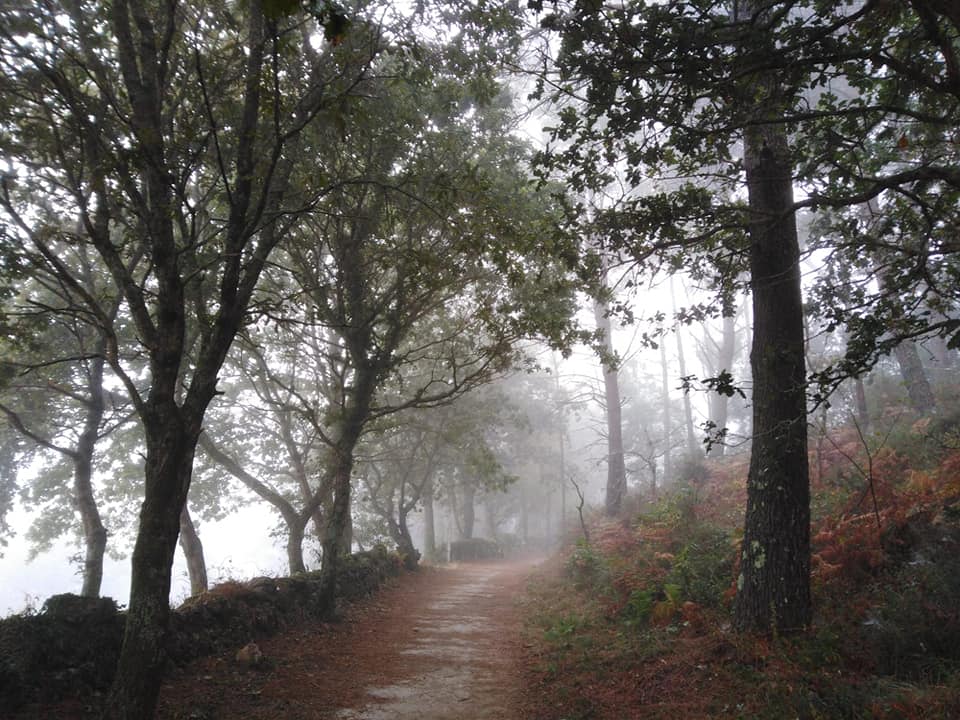 “The longest daily stretch was 29kms and the shortest was 18km which was a challenge for me” admitted Martine. “The official end of our camino was at Finisterre; there everyone lit candles near the cave, in memory of loved ones we have lost. So many of the walkers appreciate the care given our family members by the hospice. It was so emotional and held at sunset”.

Between them, Martine and Janet have raised €4,500 with more donations to come. They will also host an event in the Resource Centre, Ballymore Eustace on Friday, 18 October, along with Denise Kelly, Martine's sister.

Janet, who is a seasoned walker, also found it an emotionally rewarding experience. “It was on my bucket list” she said “A wonderful experience; it was like like hand winding a grandfather clock, like winding down your inner self, an amazing five days with so much time as you walked to reflect on life, and focus on what's really important.

“You didn't have to talk, you could walk faster or slower as you wished. All of the walkers would encourage anyone who was maybe faltering, the support was amazing. I wanted to challenge myself also – could I do it? There were some serious climbs along the way but now, I've done it!”

Walking 18-29kms a day would be challenging even to seasoned walkers but, Janet said, with Vaseline applied every morning before the socks went on, she encountered no blisters. The camaraderie among the walkers was great, each supporting one another. 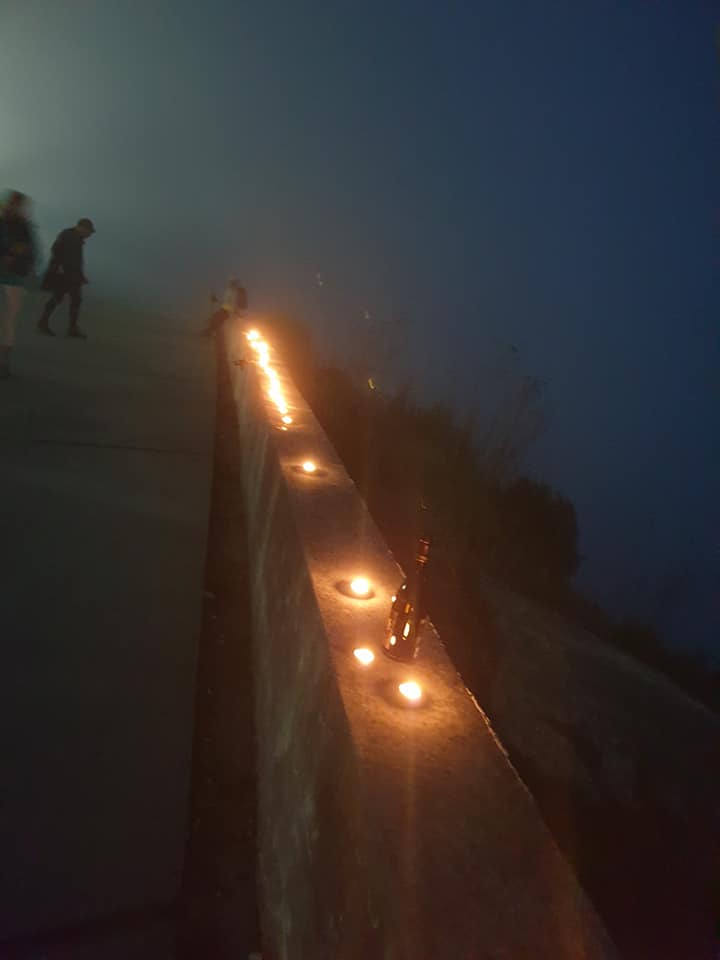 “I found the candlelit ceremony at Finisterre (above) eerily beautiful, there was heavy cloud during the sunset ceremony, with the lighthouse shining – it just made it seem hauntingly beautiful. It's known as 'the end of the world' and we all reflected on those close to us who have encountered serious illness, and for others, it was to reflect on loved ones who have passed on”.

Janet described one day's walking, 16km as a “mere walk in the park” and noted “We have made some good friends on the camino”.

Martine added: “I couldn't have done it without the support of my husband Brian and my sister Denise who held the forth at home, looking after our twins, Max and Amelia, aged 6”. The event on Friday, October 18 commences at 9.30am, and runs until noon. All support appreciated.