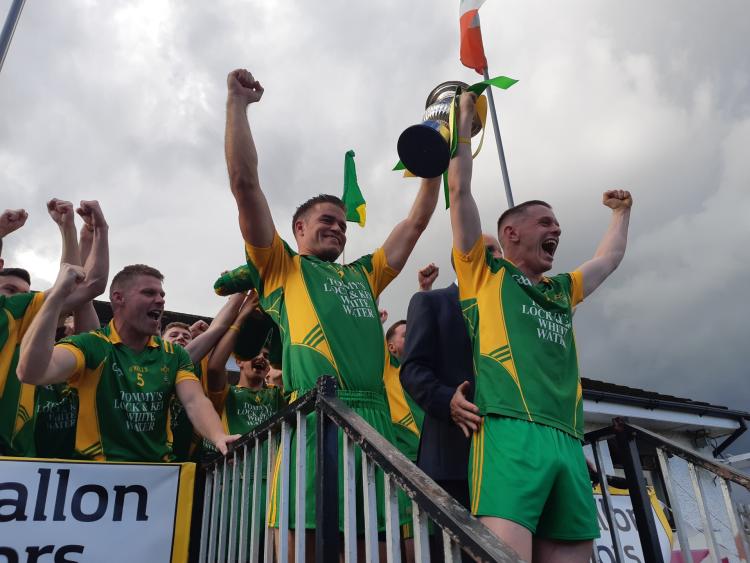 Ballymore Eustace are the Junior Football Champions after they battled to a ten point victory over Robertstown in the Championship Final at St.Conleths Park.

The winning margin was pretty harsh in the end as Robertstown put it up to Ballymore for long periods of the contest.

Ballymore Goalkeeper Steve Foley finished as man of the match after he made three brilliant saves from Robbie Dunne, Joe Kavanagh and Jason Butler and if any of those efforts went in it could have been a completely different game.

Ballymore were the much more clinical side in the end and while it was far from their best performance late goals from Stephen Dwyer and Garreth Clarke put a gloss on the scoreboard.

It was a game full of incidents with both teams finishing with 14 men as Ballymore Eustace now look forward to another Leinster Championship campaign in a months time.

Being heavy underdogs there was a feeling that Robertstown needed a lightening like start to the Final but the opposite occurred when Shane Barrett rattled the net in the opening minute for Ballymore Eustace after being fed an assist by captain Stephen Dwyer who put him in the clear.

Ballymore followed up with Dwyer then kicking a point and after barely five minutes of play the 2017 winners looked in control.

Noel Byrne got Robertstown up and running soon afterwards but a Niall Murphy free ensured Ballymore still held the advantage.

Successive Robertstown frees from Joe Kavanagh left two between the sides at the end of the first quarter but Aidan Dunne’s side were in front within minutes after his brother Robbie had a goalbound effort foot blocked and a penalty was awarded and well renowned soccer player Danny Scully finished in style.

Robertstown weren’t able to score for the rest of the half though and after Tadhg Barrett levelled the game points from Shane Barrett and Caolan Halpin gave Ballymore a 1-5 to 1-3 lead at the break.

Keith Fennell had an opportunity to extend that on the resumption but a brilliant tackle from Cole Lyons kept Robertstown’s hopes of a shock alive.

Three quickfire points from Murphy and Brian Crowe had Ballymore five clear and they looked to be belatedly going through the gears.

Robertstown maintained a vibrant goal threat though and in Mark Barrett and Joe Kavanagh there was a fascinating matchup and the Ballymore full back Barrett did well to block his marker when the Robertstown ace attacker shot close in.

Points from both Scully and Kavanagh in the 41st and 42nd minutes had Robertstown within touching distance but a poorly directed kickout from David Percival led to Ballymore’s second goal with Joe Broderick catching unchallenged before offloading to Tadhg Barrett and he found Garreth Clarke who scored.

To their credit Robertstown didn’t drop the heads with Noel Byrne kicking his second score and the chance they were praying for arrived in the 48th minute when Damien Leeson kicked a long pass inside which Mark Barrett misjudged and it duly arrived into the grasp of Joe Kavanagh and after stepping inside Barrett you would have put your house on the team captain finding the net but somehow Steve Foley got something on the shot to force it wide.

Mark Kelly was sent off minutes later for Robertstown and their brave effort seemed to be up even if Kavanagh and Shane Barrett exchanged scores.

The numerical advantage didn’t last long as entering injury time Ballymore were down to 14 when Garreth Clarke received a black to equal his earlier yellow card.

Ballymore kicked on in the final few minutes with a brace from Simon Murphy and Niall Murphy’s fourth of the day that left Ballymore eight to the good.

A point from Danny Scully and goal attempts from Jason Butler and Robbie Dunne being saved by Foley was how Robertstown ended the game but it was Ballymore who had the final say.

Niall Murphy broke clear on the counter and after he was pulled down in the square a second penalty over the sixty minutes was awarded and captain Stephen Dwyer fired home the shot as Ballymore claimed another Junior Final victory.