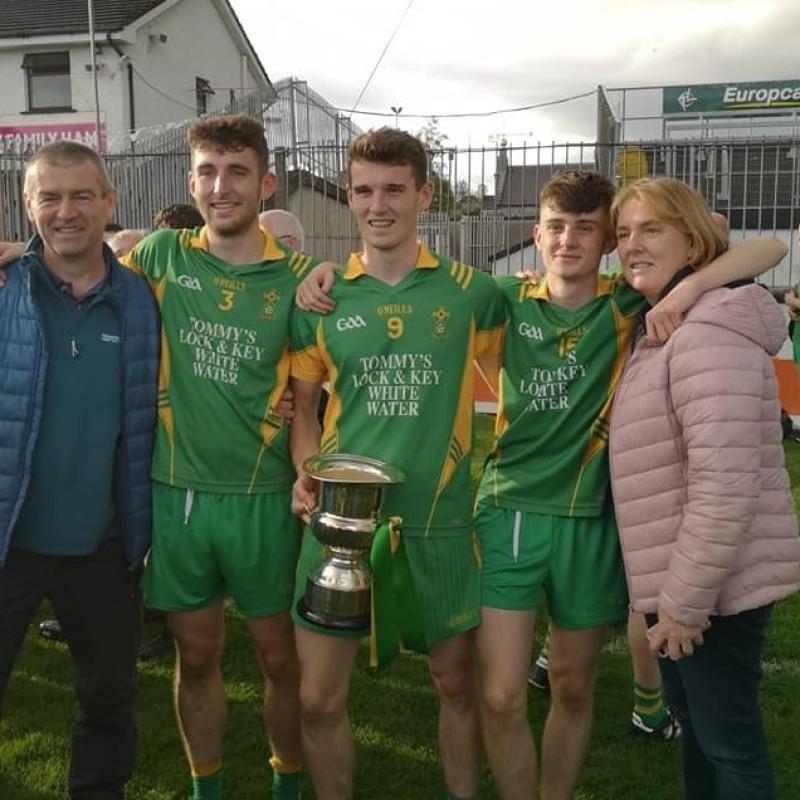 Last Sunday was a great day for Ballymore Eustace as they won the Junior Football Championship but for one family in particular it was especially pleasing.

Three of the Barrett’s started the game and all played starring roles in the 3-12 to 1-8 victory over Robertstown.

Mark is the most well known of the three siblings and he has won a Leinster Minor Title with Kildare and was also full back on the All-Ireland Under 20 team in 2018 and he was joined on the winning Ballymore team by Shane and Tadhg.

Mark was full back in the win, Shane scored 1-2 and was one of the leading contenders for man of the match while the youngest Tadhg played corner forward and got himself a point.

After the game Mark confirmed that this was the first year that they have all played together and it made things extra special.

“This is the first year that the three of us have been able to play on the same team as a result of age difference or whatever so it’s nice to go and win something as a family”.

Ballymore were big favourites to win the title from the outset and despite being far from their best on the day they achieved their ultimate goal.

“We found it a lot more difficult this year than we did when we won it two years ago so fair play to Robertstown and Caragh beat us in the group stages aswell so its been a much tougher competition this year and the standard has increased”.

“It’ll be interesting to see who goes up next year and hopefully we can stay at Intermediate a bit longer”.

“It’s only nine years ago that we won Intermediate and we were Senior for a few years and to be back playing Junior wasn’t ideal”.

“It’s not where we want to be as a club and hopefully we wont be back while I’m still playing”.

“This year is completely different to 2017 and it’s great that we have a couple of young lads coming through now from some of our Minor teams”.

“At one stage today our whole full forward line was Minor so it’s nice to have those lads coming through and all our teams are competing well at underage so hopefully we can push on for Intermediate in a few years”, Barrett admitted.

Mark Barrett also gave credit to his brother Shane for getting his side off to the perfect start and talked about how tough a game it was.

“We had a dream start to the game and we couldn’t have asked for more in fairness and it was a well worked team goal aswell”.

“Stephen Dwyer got the ball on the wing and passed it in to Shane and it was a great finish by him in the end”.

“In fairness to Robertsown they were very tough and dogged and no pushovers at all”.

“The scoreline probably doesn’t reflect how close the game was all the way through and we only pulled away at the end. Thankfully it took a bit of pressure off us”.

Ballymore will now go into the Leinster Championship next month and they are fully intent on scratching the itch of a Provincial campaign after it came to a disappointing end two years ago.

“When we won two years ago one of our biggest regrets was how we lost the first game in Leinster and we maybe took it for granted but we know now we might never get another chance at a Leinster so we want to go hell for leather to try and win it and please god it goes well for us”, said Barrett.