Minister for Education visited the school 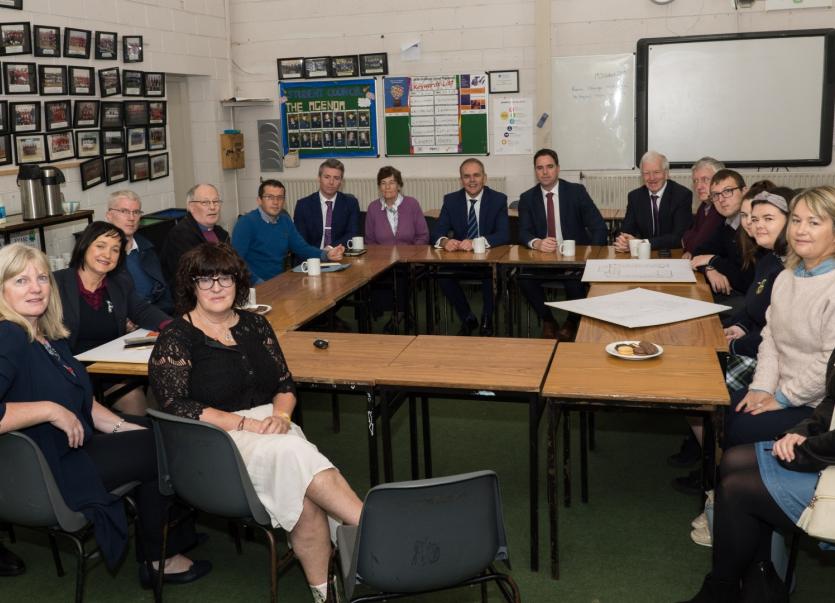 The Minister for Education and Skills, Joe McHugh has apologised to the staff, pupils and their parents of St Paul's school in Monasterevin for their 20 year wait for a new school.

The Minister, who visited the school on Wednesday morning, was taken on a tour of the school to see at first hand the dire conditions that the pupils and staff in the school have to put up with.

Afterwards a meeting was held with the Minister, the Prinicipal Brian Bergin, the school action group, Kildare South TD's Martin Heydon and Fiona O'Loughlin and several other interested parties in progressing the new school.

"We are now ready to move this across the line," Minister McHugh told the meeting. "I'm really sorry you had to go through all these delays."

The Minister confirmed that the Design Team has been given the go ahead by the Department of Education to process to Tender Stage, a stage the School building project has never reached before.

The Design Team will now draw up the required paperwork and proceed to tender in the coming weeks.  The meeting heard that once a contractor is appointed the process can begin in earnest and the new school could be built by the end of 2021.

The meeting heard that the site acquisition for the new school at Moore Abbey will be processed in the coming weeks and the transfer of lands will be signed off.

However Principal Brian Bergin requested that the Department of Education acquire more land for the new school's playing pitches, while members of the action group pressed upon the urgency of the new build, telling the Minister he cannot 'press pause' on it.

The Minister was also told that this 'is only the start' for Monasterevin as new schools are badly needed for the primary sector where in St Peter school there are 32 pupils in each class.

Principal Bergin said afterwards that it was a 'good meeting' adding that he was happy with the acknowledgement,  apology and commitment from the Minister towards the new build. He also said that he was happy to hear that the site acquisition will take place in the coming weeks and the Department will give approval for the successful tender to go to construction immediately after the tender process has taken place.