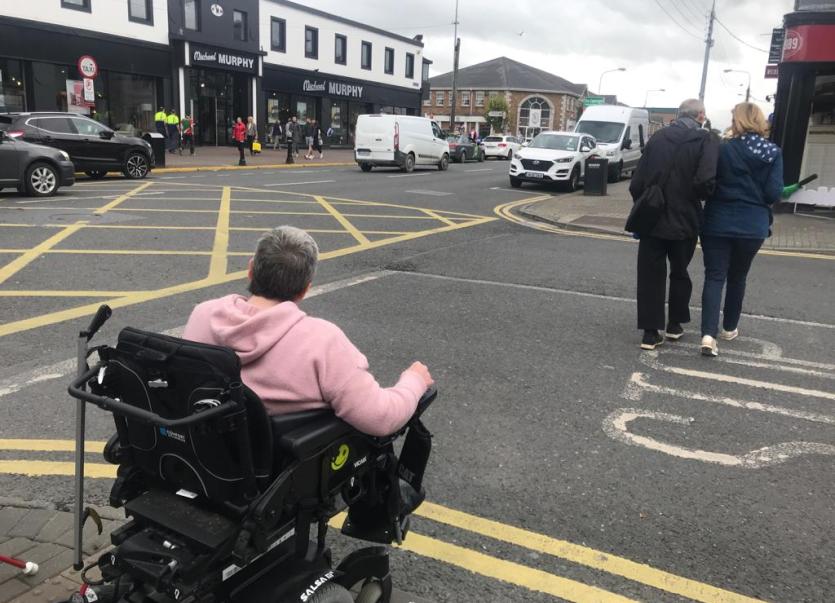 Mary, a wheelchair user, finds this junction at Main Street/Edward Street very dangerous, as there are no pedestrian lights

MakeWayDay hosted on Thursday, September 26 last entailed a simple exercise, when able-bodied persons accompanied persons with a disability, and took a normal stroll together around your local area. For a blind person, or a partially sighted person, or a wheelchair user, or even someone with balance issues, walking the footpaths can be downright dangerous. And it is fully sighted and able bodied persons who cause the difficulties! 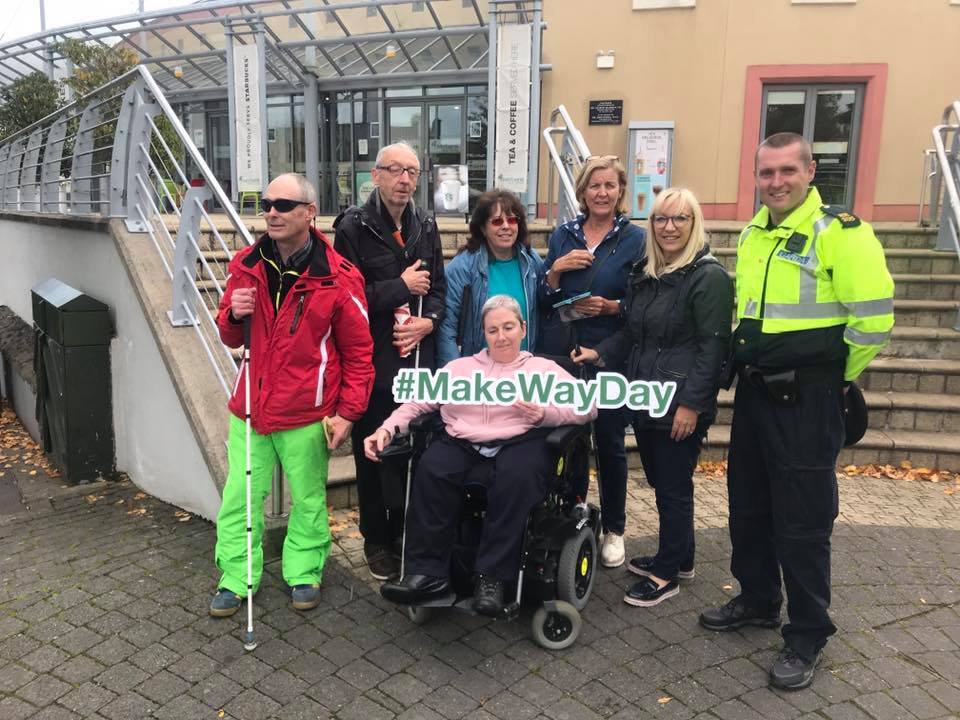 Last week, Cllr Fiona McLoughlin Healy and Cllr Peggy O'Dwyer of Newbridge MD, joined Gary, Mary and Martin of Newbridge Access Group, plus Dympna, and local garda, Brian Carroll (above), to see exactly what it is like for anyone with limited eyesight. The Newbridge based councillor was horrified at the lack of consideration and ignorance shown on the day.

“The amount of people who walk head down, looking at their mobiles or iphones is incredible. They were oblivious to our blind walker, and also Mary in the wheelchair. In fact, Mary said people regularly end up on her lap!”

The purpose of 'MakeWayDay' was to encourage able-bodied members of the public to look out for obstructions and dangers which seem a normal part of everyday life in our towns and villages. The public was urged to take photos of park cars on footpaths, bikes chained to railings, sandwich boards and overhanging branches, and to post then to social media. 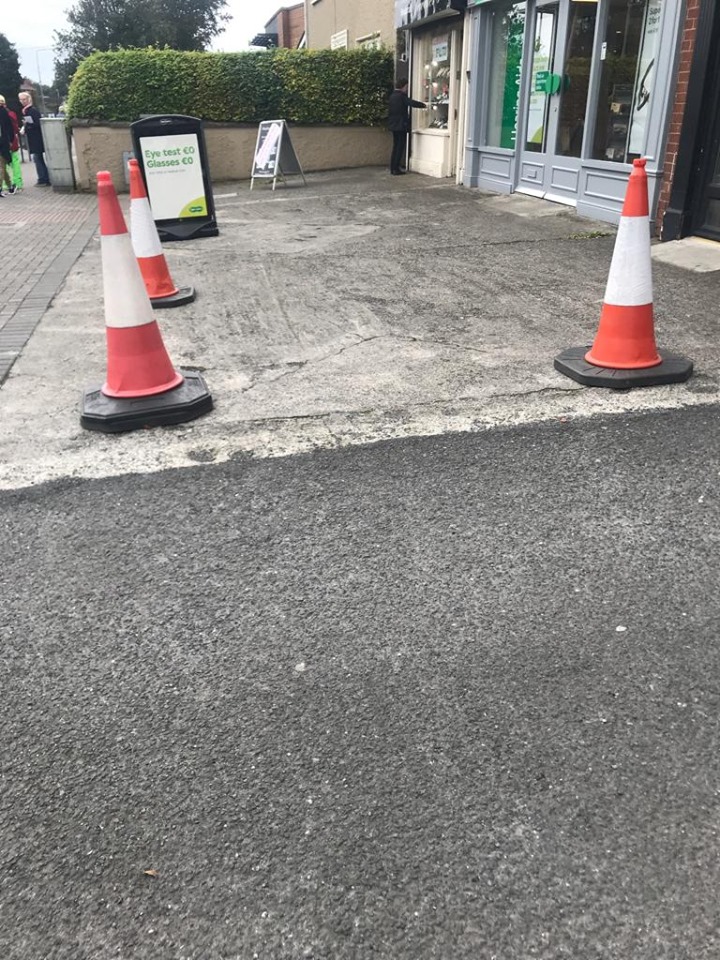 Cllr McLoughlin Healy was horrified at what they saw on a walking tour of Newbridge.
“We met bins, bikes, signs and cars all on footpaths along the way. We also learned more about signposts around the town that do and don’t have covers that protect a person who may bump into them and lots more besides”.
She continued: “I joined the Newbridge Access Group with Garda Brian Carroll from Newbridge Garda Station to see for myself. As we walked through the town, we experienced  problems that embers of the group encounter as they go about their daily routine.

“We take so much for granted having full sight and being mobile that we tend to forget the issues other people face, through slight loss and lack of mobility.   You will see from the pictures numerous simple problems that people encounter in our town, and with a little thought from local traders and the general public including motorists, we can help to address the situation”.

Outdoor signage, noted the councillor, is a major hazard. “If shopkeepers could place their sandwich boards signs on to their shop fronts, these signs would less of an obstacle to walk around.

“Clothes rails and furniture placed for sale outside shops are a problem because sometimes they are outside and sometimes they're not; this has become a major hazard for blind people who know their route well. If signs, furniture and promotional goods are placed randomly outside, what hope has a blind person?” Cllr McLoughlin Healy stated if there was some consistently in placing the signage etc, it would be much safer for blind persons walking the route.

“ Some side streets have a large amount of sandwich boards placed in an irregular pattern. If these boards were always placed in the same straight line along with the flower planters, this certainty of location would help pedestrians with limited or no vision.”
She continued “Bicycles chained to bollards and road signs are another obstacle for people to avoid, There are areas in the town where notices have been placed to stop cyclists chaining their bikes to railings but the general public still insist on doing this”.

Eyre Street, she said, was a nightmare to cross over the road, as it is very poorly designed for wheelchair access. “The quality of the footpaths are extremely poor , and this makes it extremely difficult to navigate in a wheelchair”.

But the issues are not confined to thoughtless walkers, shopkeepers and poor surface conditions of the footpaths - motorists too came under the councillor's fire.

“Motorists do not seem to notice the white canes that blind people use,  and are not taking into account that one of these pedestrians may well step out onto the road in front of them as they are driving, Listening to the group as we walked the town,   they commented on how motorists regularly park in pedestrian areas including on footpaths. This is an enormous problem for wheelchair users and the blind/partially sighted in our community”.

Cllr McLoughlin Healy does have some recommendations, even to Kildare County Council.

“We need to be more mindful as a council when positioning road signs.  There is a road sign placed in the centre of the footpath in Pairc Mhuire (where excessive dog poo is also an issue). Road signs need to be encased in a plastic sleeve to safeguard people who accidentally bump into them. Not all of our road signs have the plastic sleeve in place.

“We also need to be consistent with kerbing as the partially sighted and blind people in our community depend on kerbing to control/guide them in the direction in which they are walking.   Opposite the Circle K Petrol station, there is a strip of kerbing that stops short of the end of this path. This misleads people using a cane and they end up walking into the upright concrete posts approaching the next corner.” 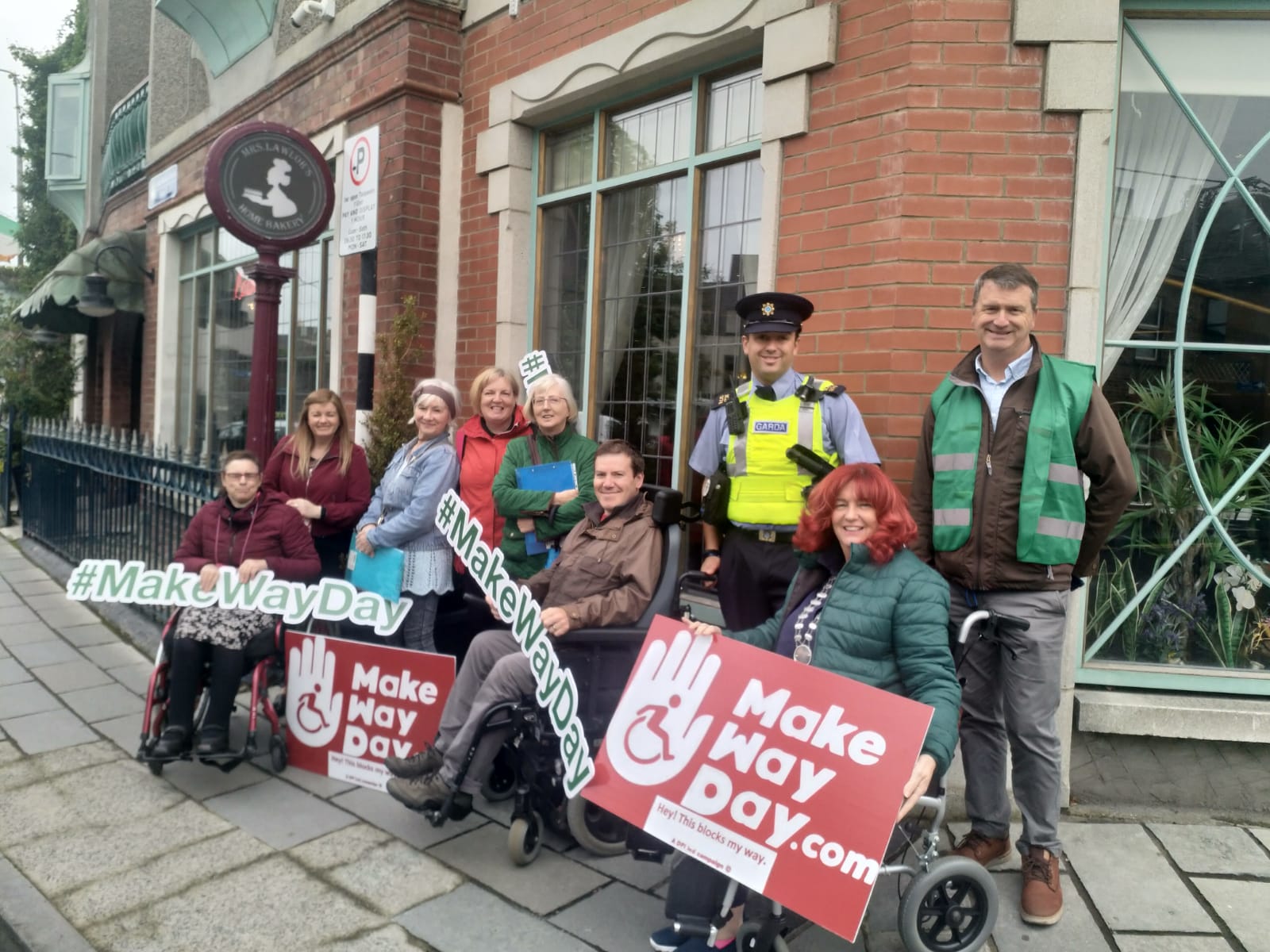 All over the country, town and village tours were undertaken to see exactly how bad the situation is for partially sighted/blind or wheelchair users. Cllrs Bill Clear and Carmel Kelly (above) joined Majella O'Keefe and members of Naas Access & Disability Group, along with garda Shane Smyth (Clane GS). They too encountered obstructions and danger at every turn with cars blocking pathways, recyling bins wheeled onto the path of pedestrians, rubbish and packaging left out, etc

“With a little thought from the general public,  county council and businesses” said Cllr McLoughlin Healy, we can make life a lot easier for access groups, and other members of our community – not just on MakeWayDay, but all year round”.