October 5 at Hawkfield Manguard Plus COE 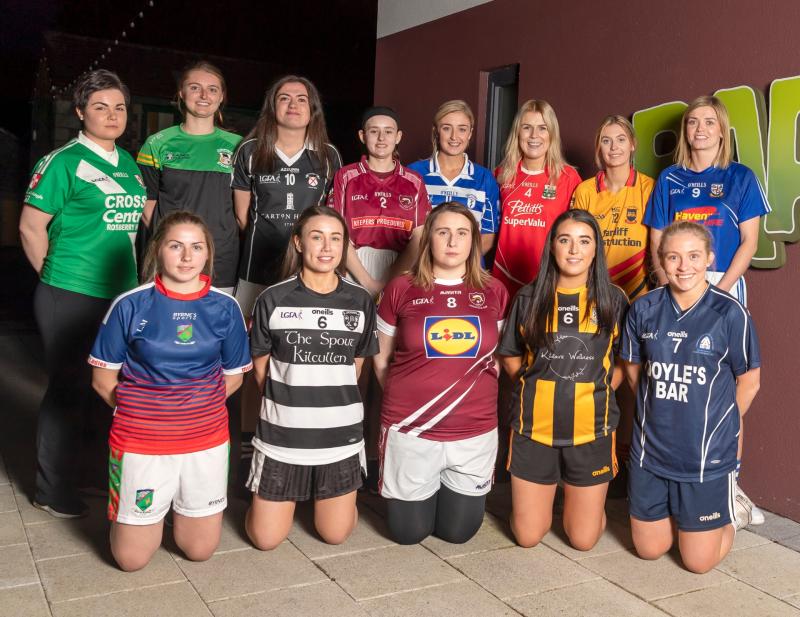 Rose B O'Donoghue chats to the managers and players in advance of Saturday's league finals, when Division 1 to 7 will battle it out for honours

Seven finals on Saturday next for Kildare LGFA, a chance for some to avenge a loss in the championship and for others, it's all about endorsing the club pride. One thing is certain, having spoken to the players at a photo shoot in Barretstown on Tuesday night last, “passion”, “friendship” and “challenges” were the underlying emotions expressed by most of the captains or key players who'll be togging out on Saturday next with a League title on the radar.

Donal Fitzpatrick, Kildare LGFA PRO as always was on hand overseeing the photo shoot and interviews.

Thirteen of the fourteen finalists attended, rivals, team mates, and even in one, pupils and a teacher, all playing for Athy ladies on Sunday next! Niamh McEvoy (25) teaches at Art Scoil na Tríonode, in Athy and joining her on the team are Hannah Malone, Ela Rowan, Tara and Grace Purcell.

The corner back has been playing for 16 years now and comes from a strong GAA background.

“GAA has been my life since I was a kid. I train 2-3 nights a week, all year round, and sure it's just part of my life, and it's a big part of our community in Athy. I also help with school football training, I have so much passion for the game, and the friendships, it's all good”.

Manager Trevor Girffin is in his first year with the Athy ladies, having trained extensively at underage with other clubs including Sarsfields and Castelmitchell.

“We've a good chance against Celbridge on Sunday” he said “Albeit they won twice in the league and championship earlier this year but, as we beat Kill in the league semi-final, we have improved and with a full squad, we're optomistic!”

Briona Hogan, captain of Naas and her side will be contesting the Div 2 title against Sarsfield. A freelance coach with Horse Sport Ireland, Briona (24) coaches for showjomping, dressage, etc – a far cry from the skills required for gaelic football.

“I'm playing since I was 8 years old” she said “I love it, Saturday will be tough but we'll go for it”.

Manager Richie Shaw is training the Naas girls for three years now. “We won Div 3 League last year but fell short in the championship in recent years but we're nearly there. This is a young side; Saturday will be difficult – we are an intermediate side facing a senior squad in Sarsfield”.

Junior captain Mia Donnelly stepped up for Noelle Earley, captain of Sarsfields, who couldn't attend. Mia has been playing for over 10 years. “I took a break during my studies but I've just finished my Masters in Environmental Science so I joined the junior squad and we have 50 girls between the two squads, junior and senior. My mam Celia Kemmy was a camogie player and my father, David Donnelly played with Clane”.

How does she think Saturday's game will play out? “I'm optimistic, the girls are prepared, and if we play as a team, it will go well on the day”.

Aoife McWeeney is a selector with Maynooth, who face Kilcullen in the Division 3 final. Only her first year, she joins Steve Sheeran but plays with her home club, Kiltubrid in Co Leitrim – still playing and travelling to her home town. “We lost in the championship final to Glencar Manor Hamilton”.

Maynooth captain is 19 year old Dervla McGinn, a student of psychology in Maynooth NUI. Ironically, Dervla stated “It's definitely not in my DNA, my father is from the US and my mother is a Kilkenny woman!! Saturday will be a good game, they beat us in the championhsip but we beat them in the league”.

Clare Mulrennan stepped in for Emer McBride with Grainne O'Toole in attendance. “Just call me a female mentor, jersey washer and well, just about everything” said Grainne.

Clare, aged 26, works at Lidl head office in Tallaght in quality control. “I've been playing for 18 years since I was 8” she said. “I have loads of underage country medals with Kilcullen, along with Junior A and C championships”.

Paul Burke, trainer of Two Mile House acknowledged the TMH senior side had a poor championship but this is a young side, with 2 aged 16 and the eldest being 21. “Inexperience and numbers cost us. We have played Castledermot twice this year, and it's one a piece so it's going to be tough”.

Niamh Byrne (25) captains their opposition, Castledermot. Working full time in marketing at Naas Racecourse, she feels like she has always played. Lining out against TMH in the Div 7 final, Niamh says the two sides drew in their last meeting, “So it will be tough enough”.

Noelleen Kately, Vice Chair of Castledermot GAA appealed for volunteers to coach their minors and underage teams. “Paul and Gary do a marvellous job with the seniors but we need trainers for the younger girls coming up. If anyone is interested, contact me at 085 2495 100.

Milltown captain, Lisa Murphy (21) will play corner forward against Milltown. Her sister Rebecca also plays on the team, and her brother also plays football. “It's a strong passion for me, definitely in the blood!” said Lisa who works full time in Bergin's Pharmacy, Newbridge.

Ken Johnson trains the Milltown side and would be well known in Ellistown GAA circles. “There's some serious talent in this Milltown side” Ken said. “They've been on the wrong side of a few championship finals and lost to Kill in the Junior B final. It will be hard going on Saturday against Round Towers. We have beaten them twice and we'd be hopeful of a similar outcome!”

Sarah Duignan is trainer of Round Towers. “When manager finished a few months' back, I took over the reins. I played with Towers myself and I played rugby but had to give up, owing to injury. Milltown, our nearest neighbours and arch rivals so there's great excitement in advance of Saturday's game”.

Captain Ellen Heffernan (20) studies HR Management at DIT, and is playingfootball since she was about four. “I love the sport, and I've made great friends through the GAA”. Joining her at Barretstown was Vice Captain Leah Hayes, a student of economics at Maynooth NUI. Leah helped ot keep the team going when the manager stepped down. “Saturday will be tough. WE were beaten in the Championship by Milltown but we were missing key players. We've a full team for the final so bring iton!”.

Grace Flynn captains the Celbridge side, The oldest of the players at 33, Grace is a property surveyor and 'only' playing gaelic football for 7 years, haing been a camogie player before that. “I love being part of a new club, making new friendships and a new fitness challenge, “We are in with a good shout on Saturday against Athy. We have beaten them twice this year but we can't afford to be complacent”.

Celbridge is managed jointly by Paul Lynch and Paul Earley. “It's my first year with the seniors, having trained the minors previously” said Lynch. “I'm familiar with players coming up through the ranks and they range in age from 16 to 33. We have a 50-50 chance against Athy. We beat them in the league and championship already this year but they've four or five key players returned to the panel so we shall have to see how it goes on the day”.

Div 6 will see Leixlip 2 taken on St Laurence's 2, another north v south battle. Damian Long has been the Leixlip ladies manager for the past 6 years, coaching from U10s up, so he is well familiar with the players. “So long as it's a good game of football, whatever happens, happens. This is the second senior ladies team in Leixlip and we have players as young as 14, 15 and 16. It's a young team with a few minors on it, and no one in their twenties.”

Shauna Long represented captain Olivia Collins who couldn't attend owing to illness. A daughter of trainer Damian, Shauna said “He pushes me to be the best I can; he can support me as coach as well as coaching me. I've been playing since I was under 10 when Pat Travers lured me in. It will be a challenge but we'd love to bring the trophy home”.

Dave Corcoran is two years training the Laurence's side. “Last year, we reached the league final, but lost out to Sallins. In the semi final, we beat Raheens so we are looking forward to a good game on Saturday – may the best team win!”

He continued: “The team ages vary from 15 to 30, we have a mix of mature players and young sters coming up the ranks. Development is key for the club and to have this team as the second club side is a testament to the strength of St Laurence's ladies. I think we have at least four players on the U14 county side, two on the U16s and two on the minors”.

Emma Dargan, captain is 22 and an assistant manager in retail. “I was six when I started playing GAA. I've a brother Jack who plays with the sernio side. GAA is everything to me! We lost the final last year to Sallins. I missed the final through work commitments but there's no way I'm missing Saturday's game and thankfully, I'm captain again this year.

Div 1 will see Leixlip 1 v Confey. Michelle Kelly on her 29th birthday stepped in for Aileen Quinn, captain. Now 20 years playing football, Goalkeeper Michelle is only 6 years playing with Leixlip. She and twin sister Liz played for their native club, Ballincollig in Co Cork where they won numerous titles. An engineer with Intel, Michelle didn't mince her words: “We're going to beat Confey! They beat us in the championship but we didn't show up that day – but we will on Saturday!”

Kildare LGFA wish to convey their sincere thanks to Jen, and Hazel of Barretstown for their very warm welcome on Tuesday evening.

“They couldn't do enough for us on the night” said Donal Fitzpatrick, PRO.

“In recognition of Barretstown helping with our shoot, we will be giving the camp an extra bit of promotion on our social media on the build up to Saturday's finals. We urge everyone to keep the camp in mind next time they have a few euro to spare and donate to help in the great work they do with serious ill children”.

Saturday, October 5 at Manguard Plus Hawkfield Centre of Excellence.

Milltown v Round Towers at 1.15