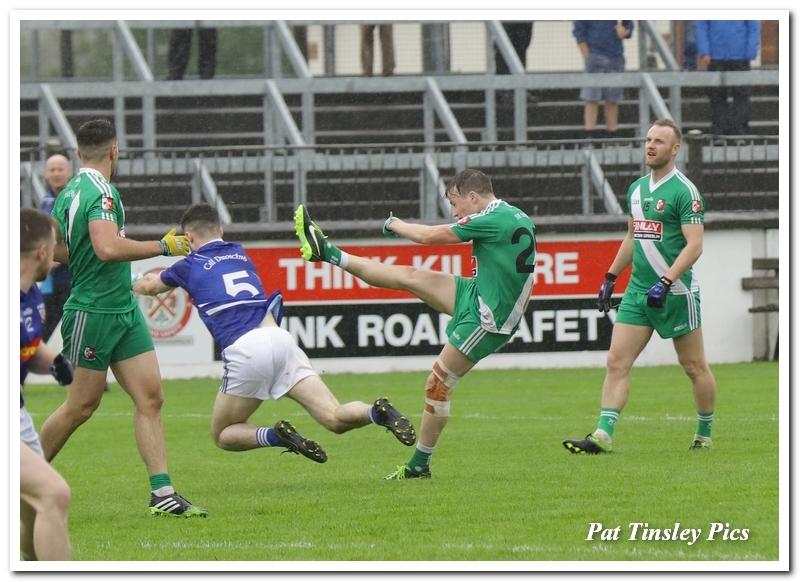 Sarsfields Barry Coffey in the process of kicking a crucial point during his side's Senior Football Championship victory over Celbridge. Photo: Pat Tinsley

Sarsfields are into their first County Final since 2016 after edging a low scoring affair with Celbridge in a rain swept St.Conleths Park.

Sarsfields went into the game as slight favourites and they made use of those odds with a highly polished display.

Quality was lacking for much of the game but when needed Sarsfields had the extra cutting edge with the likes of Barry Coffey, Ben McCormack and Caoimhin McDonnell all playing starring roles.

Barry Coffey in particular was a big performer for Sarsfields and after having an injury hit summer he was the real ace in the pack for Davy Burke’s men.

For Celbridge its unfortunately another big day where they have disappointed and the defeat would have brought back painful memories from the 2017 Final in similar conditions where they just couldn’t score enough.

Conditions played a huge part in the game with incessant rain and wet underfoot conditions throughout and it took six minutes for the opening score of the game.

Cian McConnell was a late entrant to the Sarsfields team and he kicked a nice pass in to Alan Smith who like we have seen many times down the years turned on a sixpence before curling a left footed shot between the posts.

Sarsfields doubled that tally two minutes later with Ben McCormack scoring on the back of an assist from Darragh Ryan.

Celbridge were very cumbersome in attack and they couldn’t quite work out the intensity of the Sarsfields in your face approach and after missing a number of scorable opportunities it wasn’t until the 17th minute that they registered on the scoreboard when a wayward point attempt was punched out to Tony Archbold who kicked over.

Archbold incidentally had been down two or three times at that stage with a head injury but he kept going until being replaced in the 54th minute.

Paddy Brophy then kicked the sides level in a half that was dominated by the defences.

In a tight and tactical affair Caoimhin McDonnell retook the lead for the Sash with the first of three frees five minutes from the end of the opening half.

There was still to be no separating the sides at the break though when David Hughes kicked a stoppage time free to leave the teams deadlocked at the interval.

Things remained very low scoring in the second half and remarkably Celbridge didn’t score until the 59th minute.

Sarsfields didn’t exactly sprint clear of their opponents either but their bigger attacking threat slowly but surely pushed them ahead.

They had a great goal chance minutes into the half when a blocked point attempt from Barry Coffey landed towards Conor Hartley but his palmed effort didn’t have enough strength and Celbridge cleared to safety.

Sarsfields then kicked  a couple of wides but approaching the halfway mark of the half they went three clear which would be a big lead in a game like this.

McDonnell, McCormack and Coffey were all on target and Celbridge all of a sudden looked in a bit of trouble.

It’s a troublesome period they could never get out of either and it wasn’t until the 47th minute that they had a shot on goal but Paddy Brophy kicked a free wide which was added to by Davy Hughes a couple of minutes later.

The Sarsfields tigerish play was bearing fruit all over the field and when Ray Cahill kicked his first point with three minutes remaining to give the Sash a 0-7 to 0-3 lead they looked in pole position to get the win.

Celbridge replied with a pair of Brophy frees but their attacks were few and far between on a very disappointing afternoon and despite having something of a shout for a penalty they couldn’t force a goal no matter how hard they tried.

As a result of Celbridge pressing forward there was a lot of space at the back and Sarsfields benefited hugely with firstly McDonnell converting a free near the sideline before Coffey who was excellent throughout kicked the insurance score as Sarsfields sealed a fully merited four point victory.