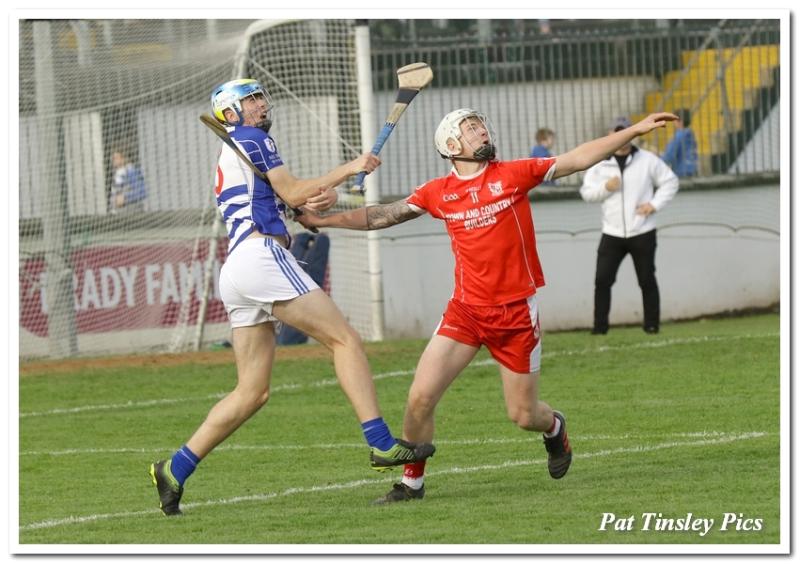 Naas are Kildare Senior Hurling Champions for the first time since 2002 after edging a disappointing final against Coill Dubh.

Naas were the better team throughout with Brian Byrne top scoring with seven points as they achieved a grand slam of hurling titles with the Juniors and Intermediates also claiming County Crowns.

In the end the three point win probably flatters Coill Dubh as Naas were the better side throughout and ran out fully deserving winners.

Coill Dubh in comparison were never really at the races and apart from a little spurt in the second period they really struggled against the forceful Naas defence.

Despite being a huge doubt all week after only appearing as a second half sub in the semi-final Brian Byrne lined out at full forward for Naas while on the Coill Dubh side Mark Byrne came in for the experienced Ruairi Hayden.

Before a ball was even thrown in tempers were flaring with a couple of players getting to know each a little better and when things eventually got underway there was tactical switches all over the field.

Naas started like a house on fire with Shane Ryan very much to the fore early on and he was fouled for the opening free which Jack Sheridan converted.

Ryan then broke clear on the far sideline to get his side’s second point a couple of minutes later with a lovely effort from play.

Brian Byrne made it 0-3 to 0-0 in the 8th minute but Colm Rourke’s side should have been much further clear on the scoreboard after Jack Sheridan squandered four scoring chances with three of them coming from placed balls.

It took till the 10th minute for Coill Dubh to score when Mark Delaney fired over from play and after playing second fiddle for much of the half they were somehow only a point behind when Declan Flaherty scored from distance.

Brian Byrne took over from Sheridan on frees halfway through the half and Naas reaped immediate dividends when he landed a 65.

Coill Dubh’s Johnny Byrne was pretty anonymous up to that stage but he showed his class in hitting over to leave just a point between the sides.

Naas then had a couple of great goal chances with Sheridan getting through on two occasions but he converted neither with his first mishit before Owen Lenehan made a point blank save to deny him on the second occasion.

Byrne did at least convert a couple of 65’s on the back of those misses to leave Naas three points to the good.

Coill Dubh kept in touch with a free from Delaney and a brilliant effort from near the endline by Ryan Casey but Naas finished the half the better with a trio of Byrne frees including one right on the sideline that left his side 0-9 to 0-5 ahead at the break.

Coill Dubh looked primed to reel Naas in when a Delaney free and Johnny Byrne’s second from play reduced the gap to two at the start of the second half but they couldn’t kick on even if they had a lot of possession.

Naas responded brilliantly with three points between the 35th and 38th minutes with James Burke x2 and Cathal Dowling powering the County Town into a 0-12 to 0-7 advantage.

After going seventeen years without a title Naas began to get nervous approaching the finish line with three Delaney frees getting Coill Dubh back within two.

Crucially though Delaney missed one of those four efforts and it seemed to puncture the Coill Dubh challenge with Byrne and Sheridan from frees and sub Mick Purcell from play pushing Naas five points clear.

Coill Dubh got back to within a goal after Delaney and Diarmuid Cahill knocked over frees but they needed a goal to force a replay and while the right man in Johnny Byrne had the ball with the last play he lost control and could only blaze into the side netting.

Referee Dave Coady blew the whistle from the resulting puckout to jubilant scenes as Naas after a long wait finally got over the line.