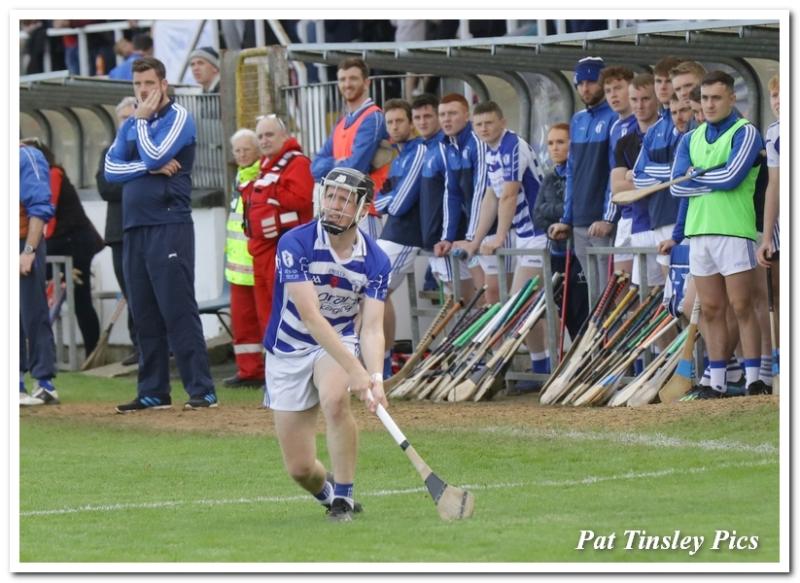 Brian Byrne knocking over one of 0-8 during Naas's Senior Hurling Championship victory over Coill Dubh on Sunday. Photo: Pat Tinsley

It’s a success that we have been waiting on for quite some time but on Sunday it came to fruition as Naas landed the Senior Hurling Championship for the seventh time in their history.

The club has been knocking on the door over the last few years with huge success at underage level and it felt like it was only a matter of time but it probably took longer than expected.

The last win came in 2002 but after two recent final defeats the time was right for Naas and one of their stars on the day was Brian Byrne and he was thrilled to see them reach their potential.

“We are over the moon and its been a long time coming. The last four years have been touch and go and we just haven’t really got over the line so to finally do it now is massive. The majority of the team was the same that reached the Final in 2016 against Celbridge and now the fruits have been realised”.

“To dig it out was satisfying and we cant really say it’s something that we have been working on but it’s something that has been touched on. Leixlip, Eire Og and Ardclough were all close games and this was no different and yeah we missed a lot of chances with a few wides and that but we knew if we kept the heads and worked hard that we would get there eventually and that’s how it worked out and it was really good”.

Byrne was an injury doubt in the lead up to the game and as a result he started at full forward in a move that worked a treat.

“We decided we would freshen it up a little bit and until the semi-final we were chopping and changing with the positions so today we left Cathal Dowling at midfield and I started at full forward and it worked very well on the day thankfully”, he said.

The 2018 Christy Ring winning Kildare Captain ended as Naas’s top scorer on the day with 0-8 and he took over on the frees after Jack Sheridan had hit a few wides but he admitted that himself and Jack know each other well and there was no panic there.

“Myself and Jack Sheridan have been working quite closely together throughout the whole year even with Kildare and now with Naas”.

“We puck them together and it was the same in the Leixlip game where he stood in when I missed a few so we have a routine and if things aren’t going right with one of us we can switch it up and that’s just the way it happened”.

The victory caps a remarkable year for Naas where they have won Minor, Junior and Intermediate Titles as well as the Senior one and its testament to the work that’s been done in the club.

“It’s been absolutely magical, when you sit down at the start of the year you hope you can win one Championship and you’d be delighted”.

“There is a huge amount of work that goes on in Naas GAA and the Minors was a fantastic start to the day but to get a Senior is what we wall wanted. A couple of the lads will now try and win the 21’s for a complete clean sweep,” Byrne admitted.

And you know what who would put it past them.