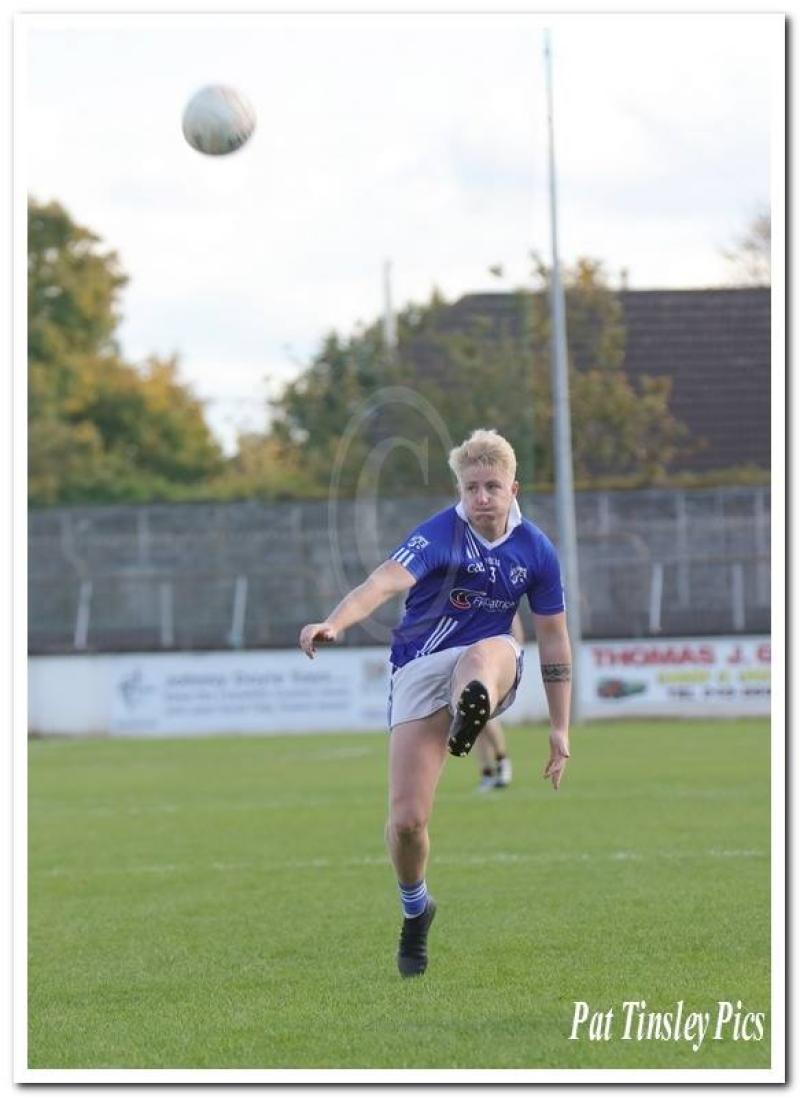 Wayne Fitzpatrick could be the ace in the Monasterevan pack after he recently returned from Defence Forces duty. Photo: Pat Tinsley

It’s a truly unique pairing as one club in Monasterevan returns to an Intermediate Final just one year after losing on the big day while their opponents Leixlip are there for the first time since the 1930’s.

The two are still unbeaten in the Championship so to say that they don’t deserve to be in the decider would be a bit of a stretch and its set up for an intriguing affair.

Remarkably at the start of the year two divisions separated the teams with Leixlip in Division1 and Monasterevan in Division 3 but after the North Kildare Side were relegated and the Barrow Blues were promoted they will line up in Division 2 together in 2020.

Crucially though they won’t be in the same Championship as one team will make that crucial leap to Senior Level at the end of Sunday’s Final.

There were joyous scenes at the end of the 2018 Final with Two Mile House reaching the big time for the first time but with it only lasting a year Leixlip can reverse positions with them after they went down last year.

In truth Leixlip were unlucky to suffer Relegation as it was only stoppage time point from Clane that sent them down but they’ve bounced back superbly.

It’s very rare that a team bounces straight back from Intermediate up to Senior but the team in Maroon and White are now just 60 minutes away from that feat.

Their opponents are looking to repeat the heroics of 2012 when they won the said title before later taking Leinster honours at the back end of the year.

The team on the edge of the Laois border don’t know how to lose currently as after they sealed promotion and the subsequent Division 3 title without DJ Earley, John O’Toole, Padraig Nash and Wayne Fitzpatrick for the majority they kicked on throughout the Championship.

Brian Lonergan’s men topped their Championship Group where they had relatively comfortable victories over Kilcullen and Ballyteague before they passed their first big test with a one point victory over Kilcock.

As fate would have it Kilcock then dully came through the preliminary stages to set up a rematch and its here where Monastetevan looked to have used up all their nine lives as they trailed deep into stoppage time by two points but a late late late goal from Mark Kelly got them out of jail.

A thundering encounter with Clogherinkoe followed in the last four and despite trailing for long periods they again showed all their character with Padraig Nash who was practically on one leg scoring a goal and two brilliant points to give them another one point margin.

So there is no doubt that Monasterevan have been put to the limit on their route to the Final but the same cant be said of Leixlip.

After a round 1 win a couple of months ago over Sallins, Leixlip continued on with three group wins over Nurney, Kill and Straffan.

Two repeat contest then followed in the knockout stages with wins over Straffan and Sallins and they had a bit to spare in both.

Sallins had plenty of possession in that semi-final but they weren’t efficient enough and with star man Tommy Moolick getting a late goal Leixlip eventually ran out seven point winners.

Eoin Dunne manages Leixlip and he has them incredibly well coached and they are a very difficult team to play through with Leixlip’s organisation having teams in a spin.

Even in Wayne Fitzpatrick’s absence Monasterevan seem to have more of an x-factor about them with the likes of Paul Maloney, Ryan Bannon and Padraig Nash all big sharpshooters.

They have a hard edge too with DJ Earley and John O’Toole really showing their strength in defence and O’Toole showed his ability when doing a fine man marking job on Jack Robinson against Clogherinkoe.

While Monasterevan have that explosiveness Leixlip can counter that with a fluent game plan that they have down to a tee.

Moolick has the ability to dominate around the middle of the field and with a solid platform behind him he has licence to go forward.

Eamonn Murphy and Paddy Meagher are the main forces in attack while off the bench Jack Barrett has a crucial role to play for Leixlip.

Its too simple to say its attack against defence but how that transpires will certainly have an effect on the result.

They are two evenly matched teams but Monasterevan do seem to have that extra bite in their forward line and while the fitness of Nash will be huge even still there seems to be enough in the tank to survive in his absence to get the victory.