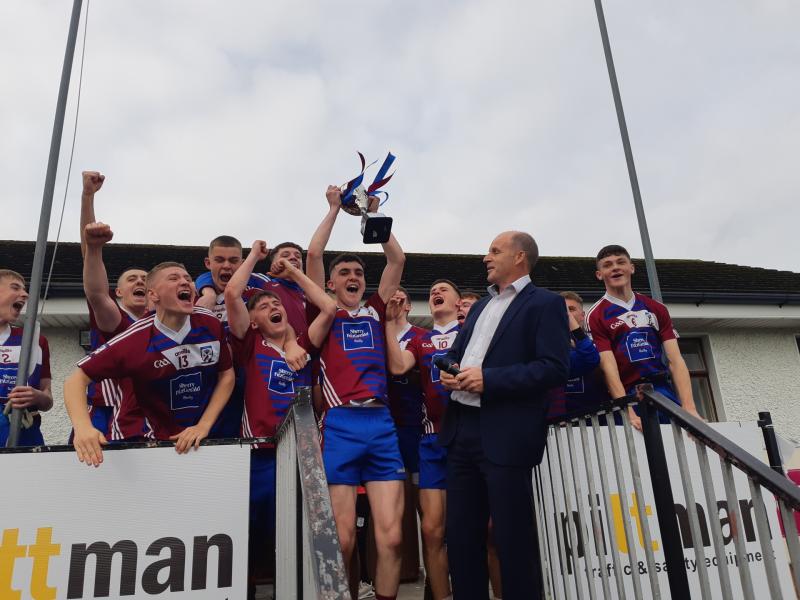 The Minor C Football Title went the way of Newtown Gaels after they battled to a one point victory over Eadestown in St.Conleths Park.

It was a game where there was five goals and Eadestown will wonder how they ended up on the losing side after missing a number of chances throughout.

Liam O’Carroll, Conan Boran and Shane Sargent were Eadestown’s goal scorers but they could never shake off a courageous Newtown Gaels side.

Eoghan O’Haire and Daniel Lynham found the net for Newtown Gaels and they eventually ground down their opponents with 0-7 from Daragh Swords having a huge impact on the result.

The game was barely a minute old when Newtown Gaels hit the net when Daniel Lynam made a run down the far wing before firing a shot int the top corner past Aaron Lawlor.

Eadestown responded in style though as they scored 2-1 in the space of three minutes with a point from Shane Sargent followed up by well taken goals from Conan Boran and Liam O’Carroll.

It was an end to end start where there was four goals in the opening ten minutes with Newtown’s second coming from Eoghan O’Haire after he caught a kickout and ran in towards goal before shooting past Lawlor with his left foot.

Lynam and Emmet Donoghue then added on points and the Caragh and Robertsown amalgamation led 2-2 to 2-1 at the end of the first quarter.

Going behind seemed to entice Eadestown in action with a palmed goal from Shane Sargent after an Aidan Cassidy point attempt hung in the air.

Cassidy from a free and Ben Fitzsimons from play added to Eadestown’s tally as they went 3-3 to 2-2 clear.

It could have been an even bigger lead but they squandered a few point attempts as well as Fitzsimons having a shot for goal saved.

The Gaels finished off the half with a brace of points from Daragh Swords but an Eadestown free in stoppage time from Sargent maintained their two point lead at the break.

Eadestown maintained their dominance on the scoreboard with a point from a 45 by Shane Sargent which came moments after the same player had an effort for goal stopped by Adam Doyle.

Newtown Gaels replied with a  pair of Swords frees to leave the gap at two before the Gaels free taker and Liam O’Carroll exchanged efforts.

Newtown were growing in confidence the longer the half went on though and points from O’Haire and Swords had the sides level going into the final ten minutes.

A 51st minute point from Adam Lee put Eadestown back in front but that would be their last score of the game.

Newtown Gaels equalised a couple of minutes later with a second poinmt from play by Daragh Swords and they then took the lead with one minute left on the clock after Eoghan O’Haire found the target from distance.

Eadestown had a couple of late chances to force a replay at the very least but their waywardness in front of goal came back to bite as Sargent kicked a free off the post before Aidan Cassidy screwed another one wide as Newtown Gaels held on for a one point win.