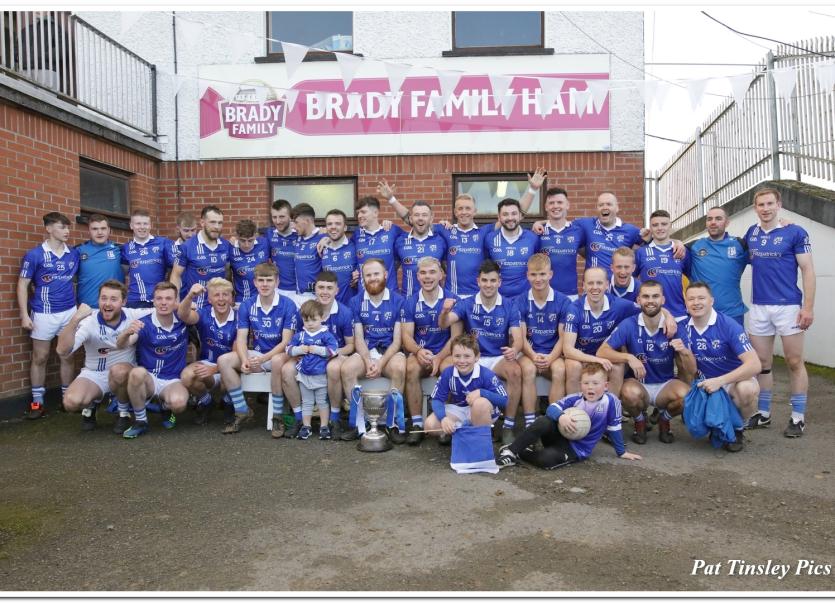 It was a game that lacked excitement for long periods but nobody in Monasterevan will care as they were crowned Intermediate Football Champions with a four point win over Leixlip.

This time last year Monasterevan were on the wrong end of a Final defeat to Two Mile House but they made up for that with a composed and clinical display.

Kevin Fitzpatrick’s first half goal was ultimately the difference between the sides in a contest that was dominated by both defences.

Monasterevan’s extra threat up front eventually told for the South Kildare team with Padraig Nash and Ryan Bannon in particular standing out.

Leixlip will have big regrets over the result though as they owned the ball for large periods of the second half but their attack was rather toothless and they couldn’t break down a stubborn Monasterevan rearguard.

Leixlip responded with a score from Niall White before a scoreless thirteen minutes followed and the sides struggled to break each other down.

Ryan Bannon uncharctiscally kicked a couple of wides before John O’Toole set up Padraig Nash for a fine point off his left foot.

The Blues advantage didn’t last long though with Tom Gibbons and Paddy Meagher edging Leixlip in front for the one and only time.

As they have done throughout the Championship Monasterevan were a huge goal threat and they struck in the 23rd minute when Padraig Nash used great vision to nail an exemplary crossfield ball into the path of Kevin Fitzpatrick and the corner forward made no mistake in cooly slotting past Kyle Costello.

Meagher replied with his second free for Leixlip but another exquisite score from Nash left Monasterevan two to the good at the break.

Referees and their team of officials get some bad rap at different stages but referee Brendan Cawley and his linesman Billy O’Connell communicated for a brilliant decision at the start of the second half.

Leixlip had a free and when Tommy Moolick tried a quick one it was blocked from within 10 yards by a Monasterevan hand though it wasn’t seen initially and a couple of seconds later Paul Maloney kicked the ball into the Leixlip net but after consultation it was ruled out.

Ryan Bannon then kicked a pair of points for Monasterevan and in a game of such tight margins a four point lead was likely to be a big one.

Leixlip had a couple of chances to go close but they left their shooting boots at home with Meagher missing a rather routine looking free but sub Neil Jordan did nail one to leave Fitzpatrick’s goal between the sides.

Nash’s third effort in the 44th minute pushed Brian Lonergan’s team 1-6 to 0-5 clear but Leixlip stayed in touch with back to back scores from Meagher and Jack Barrett.

The nerves were visible for all to see in the Monastervan side at this stage when Ryan Bannon pulled a glorious goal chance wide but Leixlip were unable to capitalise on any uncertainty with a number of misses coming on the back of some pretty pedestrian attacking play.

Monasterevan weren’t to be denied though as firstly Paul Maloney from play and Nash with a long distance free laid to rest the ghosts of one year ago.