Raheens turn on the style to capture Minor B Football Title 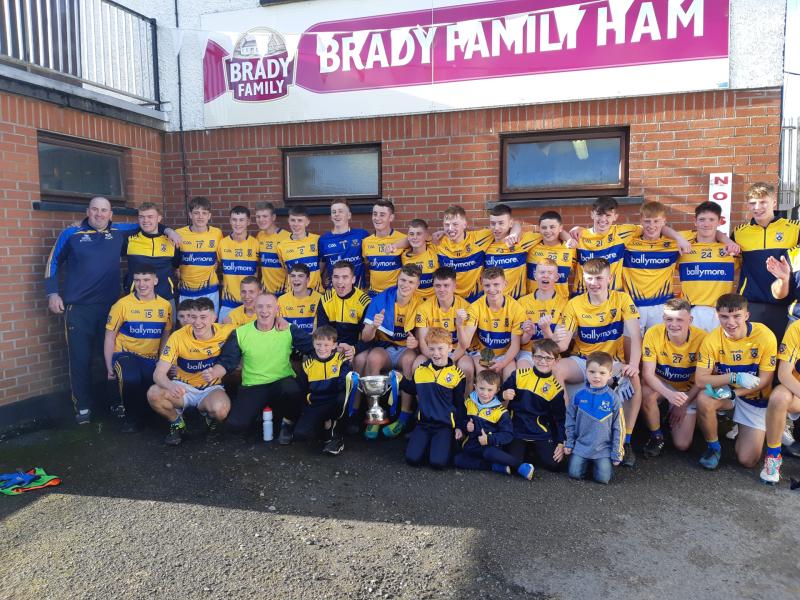 Three second half goals helped Raheens defeat Sallins in the Minor B Fotball Final at St.Conleths Park on Sunday afternoon.

Jack Hamill, Sean McLoughlin and Conor Kelly all struck for goals in a devastating ten minute period that enabled Raheens to take the title.

Sallins led after a Daniel Pierre penalty gave them a 1-5 to 0-3 advantage at the interval but Raheens’s goal threat in the second half eventually turned them over.

Raheens changed tack in that second half and went route 1 and it worked wonders as after Conor Kelly scored in the 38th minute they got serious momentum and didn’t look back from there.

Sallins battled back with late points from Lee Baldwin and Eoin McConnon but they gave themselves far too much to do when trailing by six points at one stage and Raheens hung on to claim victory.

Sallins started the better and kicked the opening point courtesy of James Dalton before Raheens hit back with a Sean McLoughlin free.

The teams then continued to swap points until they were level at 0-3 apiece by the 20th minute with Sallins scores courtesy of Lee Baldwin on the double while Raheens replied in the shape of Jack Taafe and Gavin Thompson.

Adam Delmer had an earlier goal chance during that period for Raheens but Ryan Herbert did well to save and Sallins dominated the rest of the half as a result.

The first goal of the game arrived in the 24th minute when Dalton was fouled when shooting with Daniel Pierre sticking away the spot kick to give Sallins a 1-3 to 0-3 lead.

Dalton and Adam Kelly then finished off with points as Sallins led by five at the break.

Sallins looked in control at that stage but the second half was a bit more of a struggle for them with Sean McLoughlin kicking a free for Raheens before a long ball inside was claimed by Jack Taaffe and he offloaded for Conor Kelly to find the net and all of a sudden Raheens were within a point of Sallins.

A brace of Baldwin frees steadied Sallins but Raheens were coming at them from all angles and although Gavin Thompson missed a scoreable free a couple of moments later the sides were level when Jack Hamill fired a shot into the top corner.

Only a minute later Raheens had a third goal when a well taken quick free found Adam Delmer and he was adjudged to have been fouled by the Sallins goalkeeper and a second penalty of the game was awarded which Sean McLoughlin stuck away.

It was a golden spell for Raheens and it got even better when Conor Kelly knocked over a point to leave Raheens three points clear going into the final ten minutes.

Raheens weren’t happy with just that though and three points in a row from Hamill, McLoughlin and Thompson had the Caragh based outfit 3-8 t0 1-8 in the clear.

Sallins didn’t throw in the towel though and they finished well with points from Baldwin and Eoin McConnon but in the end they ran out of time as Raheens sealed a three point victory.