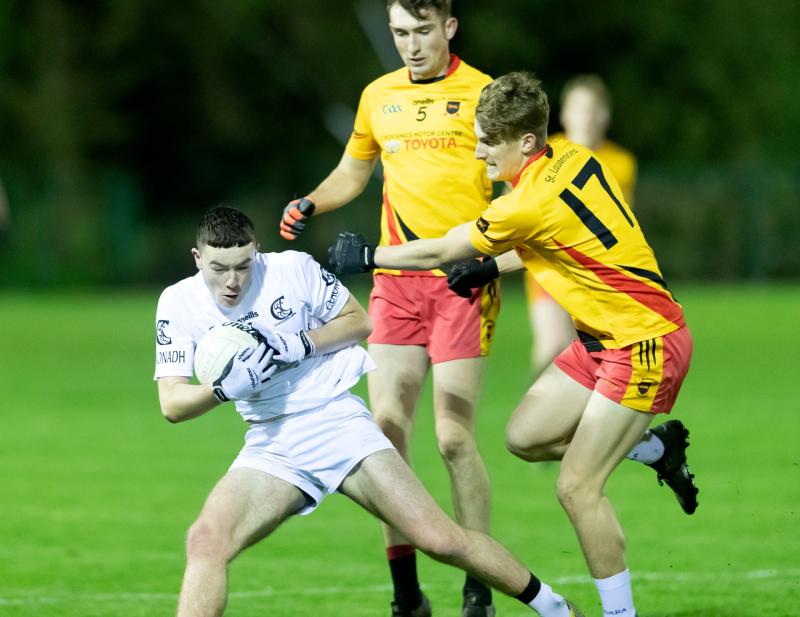 Clane are into another Minor Football Final after a sizzling second half display proved too hot to handle for St.Laurences in Manguard Plus Hawkfield last Friday Night.

Clane struggled for much of the first half but a Cian Burke penalty save kept them alive and they never looked back from that moment.

Clane have been in the last four Minor Finals and goals from Mark Kelly and Cian Shanahan put the game beyond Larries who struggled for much of the second period.

Felix Lawlor’s 51st minute goal did get Padraig O’Neill’s side back on level terms but Clane were able to go up another level to see the result out.

Things got heated late on with a melee resulting on the full time whistle that saw Larries finish with 13 players after Felix Lawlor and Conor Perse both saw red.

Harry Kirwan and Sam Reilly continued where they left off in the drawn game as they exchanged early frees before Larries took complete control in kicking the next four points.

Clane had gone almost twenty minutes without a score when Adam Fanning pointed but Laurences were still on top but Kirwan and Perse kicked a couple of wides.

A Cormac Vissard free in the 26th minute got Clane within two points but Larries had a chance to go clear just two minutes later when referee Matty Redmond awarded a penalty when Sam Hilliard was adjudged to have fouled Conor Perse.

Kirwan stood over the spot kick but not for the first time this year Cian Burke stood tall and palmed the shot over the bar.

Aaron Connolly then kicked a free in stoppage time for Clane as Larries held a slender 0-6 to 0-4 interval lead.

Clane were a different team upon the resumption as they hit 1-2 without reply at the beginning of the third quarter with points from Connolly and Reilly registering before Cian Shanahan rifled in the game’s opening goal.

Keelan McConnell had a chance to extend that lead but he pulled a wonderful chance for goal wide before Larries bounced back with a point from Kevin Eustace.

Danny Vaughan soon cancelled out that Eustace effort but a mistake in the Clane defence in the 51st minute allowed Felix Lawlor to level up the game when he raced clear to score his second goal in the two games.

The Clane response was emphatic though with Adam Fanning edging Mickser Condon’s team back into the lead.

Kirwan had a chance to level the game again with a free but his effort rebounded off the post and seconds later Clane won a penalty down the other end which Mark Kelly slotted home.

Oisin Tighe then kicked over at the beginning of stoppage time as Clane went five points clear.

Larries lost their discipline in the closing stages with Felix Lawler and Conor Perse both getting red cards as Clane saw the game out to set up a second successive Minor Final involving themselves and Naas.