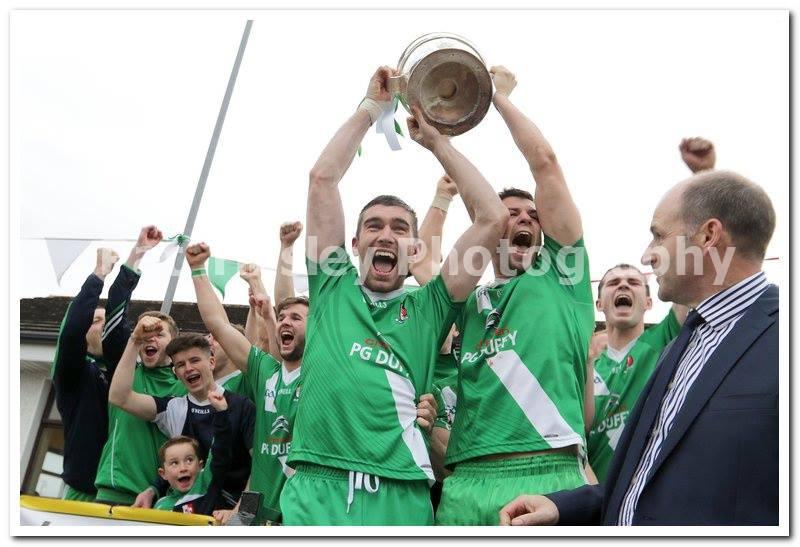 It was quite a surreal scene at the end of Sarsfield’s semi-final victory over Celbridge with Sean Campbell having to be carried by three or four people off the pitch.

The Sash Captain had been sick in the lead up to the game and he just left everything out on the field until there was nothing left there to give.

If truth be told he probably shouldn’t have played the game but that just shows the leadership the full back has and thankfully he is back in full health now.

“There’s not a bother on me now, I was in bed sick on the Friday before the game and I shouldn’t have played the game really and a lot of lies were told and just as the game went on coldness got in on me and my body shut down”.

“I had to ring in sick for a couple of days in work and I was in a bad place physically playing the game but that’s what happens and my body just went into shock”.

“I think most lads would have done it as its just an honour in even captaining Sarsfields and you kind of have to lead from the front and just as the game went on I felt it and I put my hand up to get one of the other lads on”.

The 0-9 to 0-5 win was a huge one for the Newbridge Club as it meant they were back in a County Final for the first time since 2016.

The introduction of Davy Burke as a rare outside manager has really inspired the players and you can see the enjoyment in their football as a result.

“The last couple of years we have been underperforming and limping over teams and then getting beat by the bigger teams so we knew it wasn’t acceptable and up to the standards that this club sets but with Davy coming in its been a fresh approach with pure modernisation and no old school stuff”.

“It was a breath of fresh air and everyone is just enjoying playing their football now and that’s the way to have it thank god”.

“The last outside manager we had was Hugh Kenny and in fairness it didn’t go down too well and Suncroft beat us in a quarter-final but Davy had no insight coming in and he had no bias towards anyone as it was a fresh approach and everyone had to prove themselves”.

“There was nobody living off reputations when they were young lads so it was a breath of fresh air for everyone”, Campbell admitted.

Sarsfields have been playing second fiddle to Moorefield over the last few years so you could tell the win over their neighbours at the beginning of the Championship was a big one.

Its arguable whether Moorefield were at full tilt at that stage but for the Sash a first win since the 2016 Final was vitally important.

“I know in the grander scheme of things that win earlier in the year didn’t mean a lot as the two of us still got out of the group but it’s nice to win any game, even if we lost we wouldn’t have brushed over it. We wanted to win and we did win and it was nice to know that we were still at that level and that we aren’t gone just yet”.

Sarsfields and Campbell  know that they need to be on teak top form if the Dermot Bourke Cup is to reside in Roseberry on Sunday night and shutting down the Moorefield attack will be one of the main priorities.

“Moorefield have some lethal forwards and if you just look at all their games it’s the same lads scoring and setting up play and its’ going to take a huge effort”.

“They are not County Champions for the last two years out of coincidence and we know ourselves its going to take a huge shift and pressure and we are more than prepared to do it.”

“We are all in a good place, training is going well and we feel we are ready”.

“No matter who you play a County Final is a big game and it adds a bit of spice to the supporters with it being Moorefield but the players don’t get drawn into that and its just another game really”, Campbell said as he aims to become the first Sarsfields captain to lift the Dermot Bourke Captain on more than one occasion.