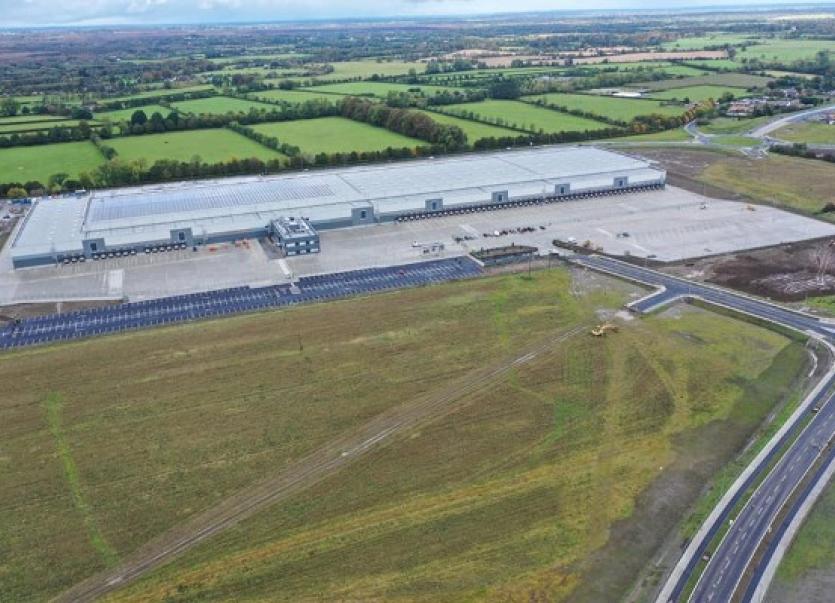 The massive new €100m Lidl distribution centre outside Newbridge will be ready to open next month — just over a year since construction began.

Up to 300 workers were on site at any one time during the building of the 54,000 sq/m facility building which is about the size of seven football pitches.

Drone photographs by Derek Clifford show the sheer scale of the development on the side of the R445 between Naas and Newbridge.

The sprawling 31 hectare site (77 acres) is located between Naas Enterprise Park and the Pfizer plant.

The new warehouse and distribution hub will service Lidl’s stores in the wider Leinster area.

Dublin-based John Paul Construction was the main contractor for the project.

The sod turning ceremony took place in late September last year and was attended by Maureen Bergin, president of the Kildare Chamber of Commerce and Peter Carey, Chief Executive of Kildare County Council.

The warehouse will be one of the biggest in Ireland and will include 352 parking spaces to cater for staff vehicles.

A 400m stretch of the R445 regional road has been upgraded as part of the proposed development including junction reconfigurations and partial realignment.

Meanwhile, an estimated €1m worth of energy-saving solar panels will be installed on the roof of the large-scale depot.
The solar panels will produce over one million kilowatt hours of energy, enough power for 240 homes — and reduces the carbon output by some 473 tonnes annually.