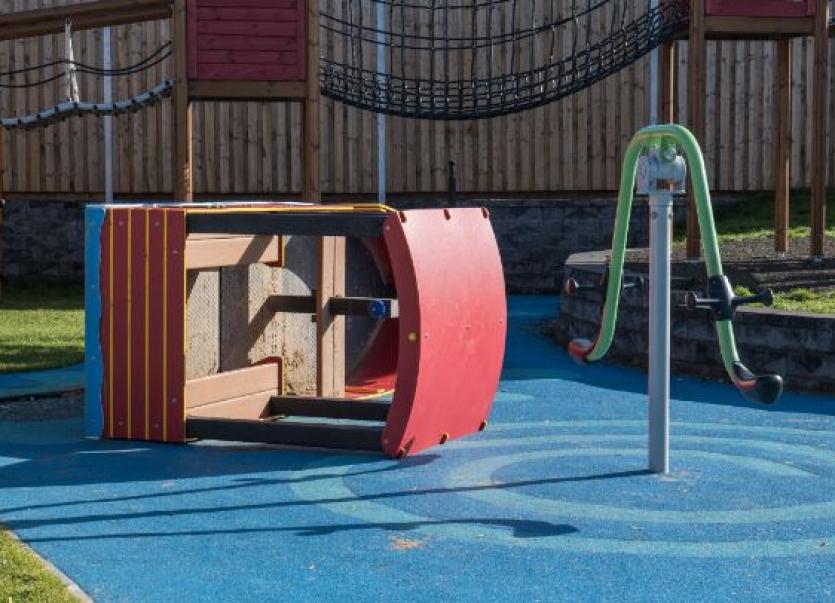 Playground equipment in the new Sallins Playground was forcibly knocked down

The long awaited Sallins playground was targeted by vandals earlier this week - even before the official opening has taken place.

Responding to the indefinite closure of the playground on October 15 due to vandalism, James Lawless, Fianna Fáil TD for Kildare North criticised those responsible for sabotaging their own community and called for secure fencing to be provided as soon as possible.

Closed: Kildare County Council were forced to close the facility earlier this week, after equipment was knocked over

“The community in Sallins waited a long time for a facility like the playground and it is incredibly frustrating that people would deliberately damage it in this way.”

He also said that anti-social behaviour at the playground has been an issue since it opened in June.

He added: “It is important that secure fencing is now provided ahead of the official opening in November so that it can be an amenity for Sallins for years to come.”

He added he has been working with members of Kildare Council on this issue “and I will continue to push for a solution to this problem.”

He also thanked Kildare County Council “for their timely response to reports of vandalism yesterday and their efforts to repair the damage.”

The playground was one of the long awaited facilities in a town where the population as well as the through traffic has continued to increase in the absence of sufficient infrastructure.

A new public realm is awaited for the town centre, there are not enough parking spaces to cope with the number using the rail service and there are concerns in the village at the delay in starting work on a new second level school at Millennium Park, Naas.

Work has started on the construction of the playground in February on parish lands between the rear of the existing parochial house and St Laurence's national school.

The campaign for the playground began at least a decade ago - before the 2011 census revealed the town had the highest population density outside Dublin.