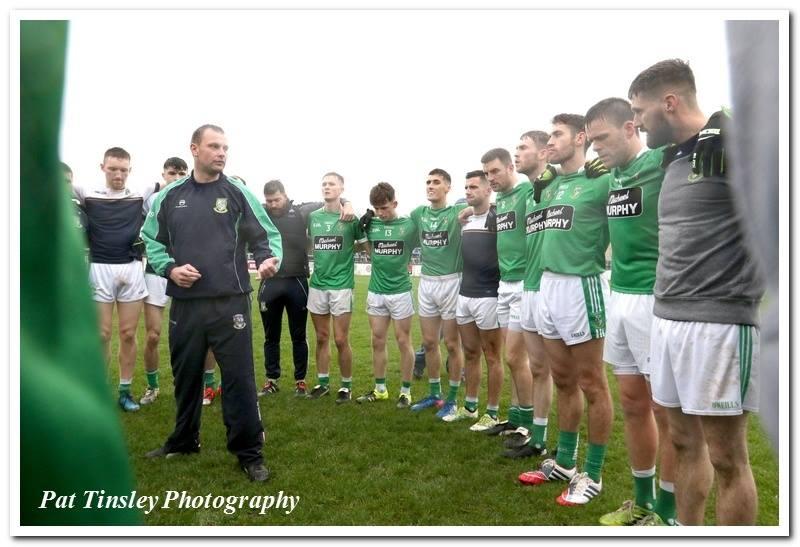 Ross Glavin talking to his side prior to the 2017 County Final victory over Celbridge. Photo: Pat Tinsley

No matter the result this weekend’s County Final will bring the curtain down on Ross Glavin’s management of Moorefield in the Kildare Championship.

A third County Title in a row and a first in the club’s history would be quite the way to sail off into the sunset but he insists it’s not something they are focused on.

“The three in a row is something for an older generation in Moorefield and I think as a group of players and management it’s never something we have spoke about”.

“From the start we thought Moorefield were too big a club and too talented a team to be happy with just winning County Titles and we’ve always set the bar higher in wanting to achieve success at Provincial and National Level and luckily we can reference that now as we have achieved something outside of Kildare in recent times”.

“Obviously to get to where we want to go we have to win a three in a row along the way but part of what we are doing is trying to do it for the wider community and those that have gone before this group of players”.

“We owe Sarsfields one, they are the only team to beat us in Kildare in the last three years and we want to get the Title back as simple as that”.

Moorefield are in a completely different place now than when Glavin originally took over in November 2016 and he admits they have used a sensible approach to management over those years he’s been in charge.

“We set our stall out in year 1 that we weren’t going to consistently flog them throughout the year and we timed certain periods of the year where we trained harder and then deloaded for the Summer but to be honest we didn’t apply a scientific style approach and it was more a common sense way of doing things”.

“They are Club footballers, there’s a great culture in Moorefield and they are a very hard working group with a great attitude so they do a lot of work outside of the collective sessions and our focus has always been to use training as efficiently as possible to make better footballers and a better team”.

“This year we didn’t do anything hugely different to any of the other three, our form dipped in the League but it was probably no coincidence that it did because we slipped down a gear or two and we weren’t training together as often”.

“We let the players plan their lives around being a Senior Club Footballer but it doesn’t deter from their training or anything.

We lost to Sarsfields in early August but the way our year worked out our phase 5 which we are still in now started a week before that game so as far as I’m concerned we are a completely different animal now”, he said.

Despite Moorefield’s form slipping at stages this year they are still where they expect to be and the team is relatively content ahead of the Final.

“We are happy where we are, our performances have been improving throughout the Championship so I think the players are a smart enough bunch in the fact that they have been trying to time their own runs aswell”

“I’m very proud of the players they put in a huge performance against Athy in the semi-final but they have been consistently good throughout the year so they are where they deserve to be”.

Moorefield have used 29 players throughout this year’s Championship and its that competition for places that is consistently driving them.

And if there is a word that Glavin mentions a lot it is culture as he aims to build a long lasting legacy with the Club.

“Winning trumps everything and when you’re doing that it increases morale among the squad and Moorefield’s not a normal club, its massive and our culture is being generated on our recent history and success since 2000”.

“The likes of Sos Dowling and Roli Sweeney have been crucial in creating the culture in Moorefield and it’s a hugely player driven environment”.

“The whole club rows in by the Senior Team and that’s why we are in a fourth Final in a row”, the manager admitted.