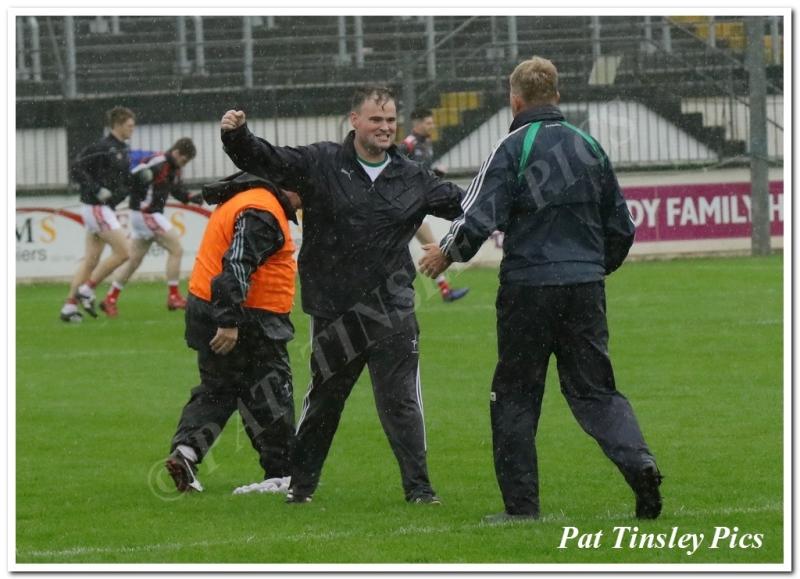 Davy Burke may not be with Sarsfields for very long but you can see the effect he has brought to the team at his disposal.

His CV is a glittering one after success with the Dubin Ladies, Confey, the Kildare Under 20’s and now he hopes Sarsfields.

The 31 year old has fit a hell of a lot into his fledgling career on the sideline but despite all his experience he admits working with this Sarsfields team is something he has really revelled in.

“History, tradition and numbers means Sarsfields are one of the bigger clubs in Kildare and it’s something I’ve really enjoyed and they are unique in the fact that they are getting stronger all the time”.

“We’ve four or five lads back from Defence Forces duty and these lads are only tuning in if anything now”.

“It’s been a different challenge for me and we were lucky in one sense that we only had Conor Hartley and Ben McCormack on the Kildare Senior team so we had plenty of depth in the squad and we were very competitive throughout the League. It’s very hard not to enjoy it when working with quality players”

It’s been a slow burner throughout the year for the Sash but that was to be expected with a new manager and a young team but like Moorefield they seem to be timing their run to perfection.

“I’m very happy with where we are today and it was after the Athy defeat in the Championship that I could see glimpses of what we were capable of”.

“We were only four or five months into our project at that stage and we have just built it from there”.

“It was very easy to then get the lads up for a local derby against Moorefield even if it was only a group game. We won the game but it didn’t really matter in the end so it won’t have huge stock on this week’s result”.

“The Celbridge game we went on again and it does look like we are getting better. They are young and mad for road and our numbers are getting bigger the longer the year goes on”.

“We’ve genuine competition in our ranks and there are very few players who have a nailed on spot so that’s the beauty of this and they all have to turn up and drive it every night”, Burke said.

The former Kildare Under 20 boss’s attitude is infectious and you cant help but get sucked in and you can see the joy in his face that he has brought a big club in Sarsfields back to where they feel they belong.

“During this Championship we played Moorefield, Athy and Celbridge so we are definitely there or there abouts”.

There is no doubt this is possibly Burke’s biggest challenge thus far but with a glint in his eye you get the feeling this is one he’s really looking forward to even if he acknowledges what is awaiting his side.

“If you look through our team we have a heap of twenty year olds including the likes of Karl Hartley, Darragh Ryan and Cian Costigan who are mixed in with the likes of Tom Aspell and Ben McCormack”.

“There is still experience there in Ray Cahill, Alan Smith and Sean Campbell but not to the extent of Moorefield so that’s why beating them was huge for the belief of this side. Now don’t get me wrong it was 0-12 to 0-11 so we scraped over the line and we won’t be talking about it in the build-up”.

“One thing I will be going back to though is how mediocre they made us look in the League in March and the game was over very quickly. It was men against boys that day and we are further down the track now but that will always stick with me when they turned it on they put us to bed in minutes”.