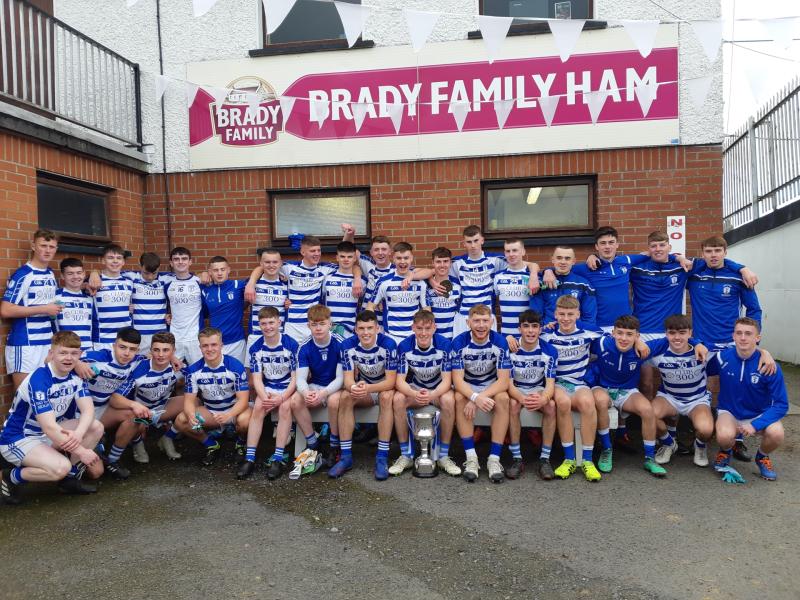 The Minor Championship winning Naas side

Naas made it back to back Minor Football Titles with a comprehensive victory over Clane in St.Conleths Park.

Right from the outset this Naas team was touted as being an exceptional one and they have swatted aside anyone in their way.

Goals from Brendan Quinn, Drew Costello and Eoin Maguire laid the platform in a second successive Final victory over Clane.

Clane never threw in the towel and got two goals themselves but they were always chasing shadows against a fine Naas outfit.

History will likely judge extremely kindly on a Naas team that has now won three titles in four years with remarkably all of them coming against Clane and they have some very talented players coming through.

It was the third time in five years that Naas and Clane were meeting in the Minor Football Final and in very breezy and cold conditions it was a somewhat scrappy start to the contest.

Despite some indecision among the teams Naas still could have had a goal within two minutes when Team Captain Paddy McDermott stormed forward and although his point attempt came off the bar the ball still dropped to Brendan Quinn but Cian Burke in the Clane goal did brilliantly to provide a point blank save from the full forward.

Clane had a couple chances to go into the lead but after Cormac Vissard and Sam Reilly both squandered frees Naas hit the front in the 5th minute with Dan Woulfe kicking over.

Clane were being very ferocious in defence in the early minutes and they used that to their advantage with points from Vissard and Mark Kelly edging Mickser Condon’s team in front.

The team in white could never truly build on the advantage though with Naas getting the games opening goal just seconds later with McDermott finding Quinn and he rounded Burke to find the net.

The defending Champions then went into overdrive with points from Woulfe, Drew Costello, Alex Beirne and Tom Browne powering them into a 1-6 to 0-2 lead.

Clane hit back with a second effort of the half from Kelly but Naas responded with points from Quinn and Sam Morrissey that left nine points between the sides at the break.

Naas extended their big lead at the start of the second period with a brace of Beirne scores before Quinn made it 1-12 to 0-3.

Clane then got something of a lifeline in the 37th minute when a point attempt from Adam Fanning hit off the post and before Oisin Tighe could shoot on the rebound he was brought down for a penalty which was converted by Mark Kelly.

The teams then swapped scores over the following minutes with McDermott and Sam Morrissey registering for Naas with the Clane response coming from Oisin O’Sullivan and Keelan O’Connell.

Two Naas goals in two minutes put the result beyond any doubt with Drew Costello and Eoin Maguire netting as the County Town went into a 3-15 to 1-5 lead.

Naas got further points from Maguire and Tom Browne before the end but Clane did at least stay fighting with a Sean Connolly goal coming before Eoin Toughig rounded off the scoring.

All in all Naas were in a different league to their opponents as captain Paddy McDermott lifted the Minor Cup afterwards.