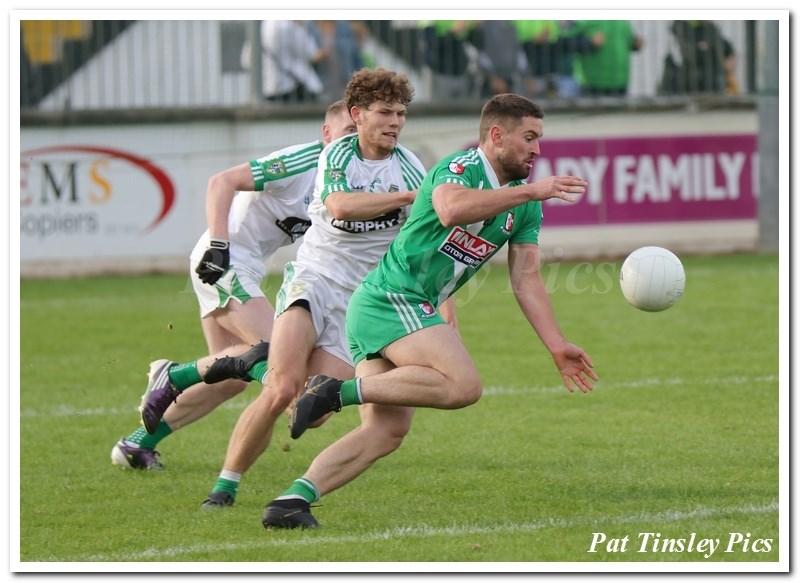 It proved to be one of the better County Finals in recent memory as Newbridge rivals Sarsfields and Moorefield played out a pulsating draw.

It all looked set for history to be made when Moorefield led going into the fifth and final minute of stoppage time with a one point lead but for the second game in a row Barry Coffey stood up when needed most as he kicked a 65th minute equaliser with the last kick of the game.

It was fitting that it was Coffey who kicked the leveller as he was absolutely superb for Sarsfields throughout in scoring five points as he proved pretty elusive in his playmaking role.

Sarsfields were arguably the better side but even still Moorefield were seconds away from success and they produced a brilliant first half display where goals from Mark McDermott and Eanna O'Connor looked to have given the Moores the edge.

Sarsfields were the dominant side in the second half though and if it wasn't for some wayward shooting the Dermot Bourke Cup may have been residing in Roseberry for the first time since 2016.

Still they can take plenty of credit from a promising display but they will have to be wary of Moorefield's excellent replay record in Championship Football.

It was a hectic end to end start in the eight meeting of Sarsfields and Moorefield in a County Final as Ray Cahill kicked the Sash in front in the opening minute.

Moorefield replied with a point from Aaron Masterson before the three in a row chasing side got a goal in the 4th minute when Mark Dempsey released a pass to Mark McDermott for the full forward to score under the body of Patrick O’Sullivan.

Sarsfields hit back with a score from distance by Barry Coffey but Moorefield still made all the early running with successive efforts from Eddie Heavey.

Alan Smith then got Sarsfields within three points but a second Moorefield goal had the Champions clear when Heavey fed Eanna O’Connor to score.

That left Sarsfields trailing on a 2-3 to 0-3 scoreline after only ten minutes but scores from Ray Cahill and Ben McCormack kept them in touch while Declan McKenna also went close with a few attempts at goal with one flashing wide and Ian McDonnell saving the other.

The sides then interchanged scores with Moorefield points from Liam Callaghan and Eanna O’Connor being cancelled out by Coffey and Caoimhin McDonnell.

As a result Moorefield led entering the end of the half on a 2-5 to 0-7 scoreline but scores from Cahill and Matty Byrne left Sarsfields within two points at the break but they could have even led as Alan Smith rifled a close in shot off the crossbar.

Moorefield despite introducing both Adam Tyrrell and Roli Sweeney were sluggish for much of the early part of the second half as Sarsfields dominated the ball with two points from Ray Cahill levelling proceedings with one from play and one from a free.

Barry Coffey was running the show in a free role for Davy Burke’s Sarsfields team and two brilliant points either side of a Tyrrell effort for Moorefield had the Sash 0-13 to 2-06 in front entering the final quarter.

Sweeney who was aiming to land his 10th County Medal with Moorefield then went off with a serious looking injury after shipping a massive hit but it seemed to inspire his colleagues with consecutive O’Connor frees edging them into a one point lead.

A barren scoring spell soon followed with Coffey having a chance to kick Sarsfields level but his shot went just by the post.

Cahill with his sixth point did soon level the game but O’Connor at the start of stoppage time looked to have given Moorefield the win.

Sarsfields had the ball for the rest of the added on period and when Kevin Murnaghan brilliantly blocked an effort from Ben McCormack it looked as if Moorefield would hold out.

Sarsfields refused to die though and after keeping possession for over a minute Coffey eventually got the ball from a near impossible angle but with the confidence of four points he took a pop at goal as the game went past the sixty five minute mark and it was as if time stood still with an eerie quietness resulting but the two umpires eventually agreed that the ball went between the posts.

Referee Niall Colgan blew the full time whistle from the resulting kickout as both teams must meet at the same place next Sunday to determine this year's Champions.