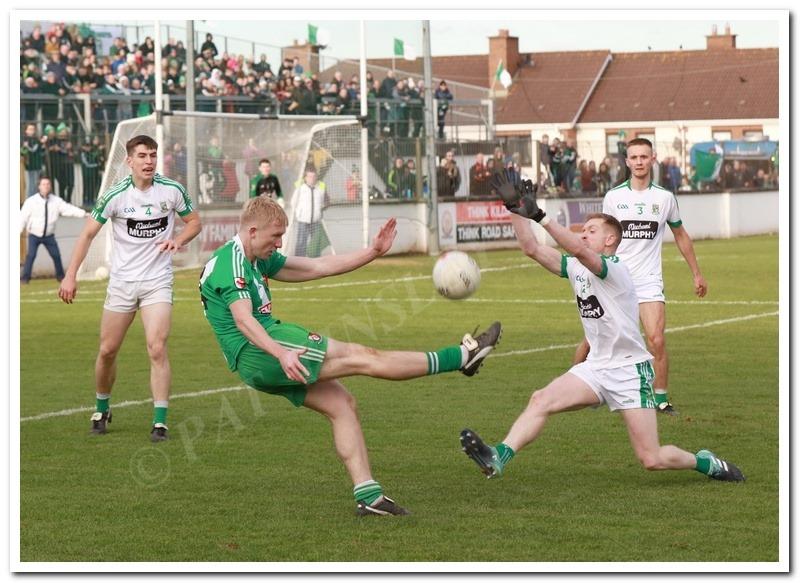 Ray Cahill of Sarsfields getting a shot away despite the best efforts of Liam Callaghan during last weekend's drawn County Final. Photo: Pat Tinsley

After Barry Coffey’s heroics in the drawn game Sarsfields and Moorefield must meet again on Sunday for the right to be crowned Senior Football Champions.

As with all replays whoever learns the most will likely emerge with the Dermot Bourke Cup on Sunday afternoon and both have a lot of work to do in that regard.

Moorefield will have been delighted with the way they started the game with those early goals from Mark McDermott and Eanna O’Connor but the fact they didn’t kick on will have irked them somewhat.

The Moores probably played the game they wanted to for twenty minutes max and a lot more will be needed for them to land the three in a row.

They will be without Ronan Sweeney tomorrow after he suffered a knock when coming on in the second half of the initial game but that may give the defending champions even more motivation to do it for their talisman and no doubt he will play a huge role in the dressing room in the build up to the game.

On the other side there is no doubt that Sarsfields came away from St.Conleths Park the happier last week as they were just grateful to get another chance.

Coffey’s late point did get them out of jail somewhat but if they had been more clinical up front they would have had the game wrapped up before then.

It’s something Davy Burke would have been  drilling into his side this week as they look for the inches to improve that will help them to victory.

Its fair to say that the Roseberry based outfit were a lot nearer their best than Moorefield were but even at that they relied a lot on Coffey’s excellence and Ray Cahill’s unerring accuracy.

Both are sure to be key figures for Sarsfields once more but it’s unlikely that Moorefield will give them as much leeway again so the likes of Alan Smith, Ben McCormack and Conor Hartley will need to up their game.

As well as Sweeney Moorefield also have worries over Mark Dempsey and Adam Tyrrell who looked to have knocks at the end of the first game and they won’t want to lose either of them.

Liam Herbert has a similar refereeing style to Niall Colgan so hopefully another free flowing game of football will result.

Its all set up for another cracker and its almost impossible to call but don’t rule out this going all the way to extra-time as the first Senior County Final since 2014 takes another day to decide the winner which incidentally involved the same two teams where Moorefield were victorious.