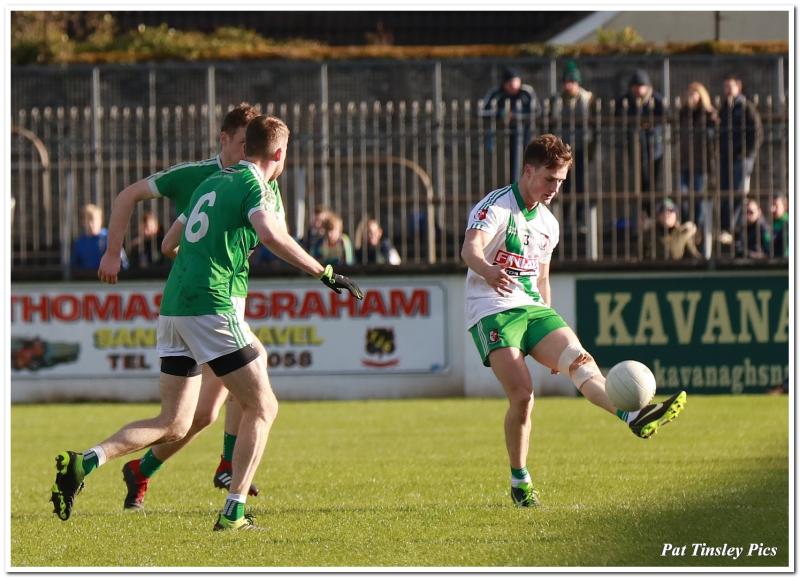 All the talk in the days and weeks leading up to the all Newbridge County Final was about Moorefield’s three in a row bid and how Sarsfields wanted to stop them.

Moorefield had never achieved that feat and Sarsfields were the last ones to do so and for Barry Coffey and co it was a huge motivation factor in the victory.

“We hadn’t talked or processed it until today but there’s no point in beating them in the first round or drawing as they were only moral victories so we needed to get the win here and there was a lot on this three in a row to be honest and neither of us may talk about it but they haven’t done it and they’ve the Leinster over us so if they had of got the three in a row aswell they would have had everything to be honest so it means a lot to the lads and it’s a great relief”.

“It was a huge thing to stop them but the only way to do that was focusing on ourselves and to be honest we have the best team and panel in the County so it wasn’t about stopping Moorefield but if you look at the pitch they have plenty to stop with us so it was more about getting our gameplan right and in turn we’d go on and win the County Championship and here we are”.

Coffey kicked the levelling score in the first game and he explained how it was a long week in the build up and how the workrate of the forwards has transformed the team.

“It was the longest half-time ever in the last seven days to be honest and you know what Moorefield are going to give you and they are a very tough team but I think our lads were willing to die to win today so its more relief than enjoyment at the minute”.

“That workrate among the forwards is Davy Burke all over and he’s whipped a few lads off after ten minutes in League games so we’ve learned the hard way that if your not defending you’ll be sitting beside him on the sideline so there’s lads queuing up with the likes of Karl Hartley and Robbie Confrey who got no game time and they’d be on any other team in the County and there’s a good few others aswell”, he said.

Sarsfields made a blistering start to the game as they built on the momentum from Coffey’s leveller and although the playmaking forward came in for a bit of treatment from the Moorefield defence he brushed it off and finished with three points.

“We were probably too pumped up at the start as they ran away from us in the second quarter but after that we dominated. We knew if we came out of the blocks we’d be well set up but we did go over the top a bit and they got a run on us”.

“We regrouped at half-time though and we knew we had too many forwards not to score”.

“There was two lads on me for a lot of the game but I knew then there would be more space for Ben McCormack, Ray Cahill, Alan Smith and Cian Costigan”.

“They can’t have two on everyone so at this stage I don’t really care who does the scoring and Conor Hartley and Daragh Ryan stepped up so it doesn’t really matter how you get over the line when playing Moorefield but it’s enjoyable to win”.