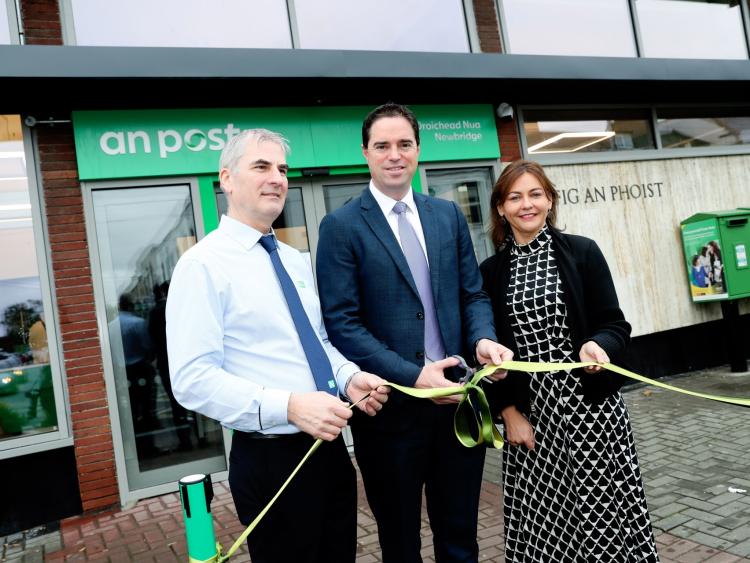 TD Martin Heydon dropped by the office with Debbie Byrne the MD of An Post Retail and Postmaster Brendan O’Neill.

Among the first in a new generation of flagship post offices is up and running in Newbridge, with local customers enjoying the new concept office on the town’s Main Street.

According to An Post Postmaster Brendan Kelly is at the helm of the new hi-tech office which is proving a welcome addition to the town.

Mr Kelly and his staff have overseen the complete renovation and overhaul of the towns post office over a number of months.

Local TD Martin Heydon dropped by the office on Thursday morning to be met by Debbie Byrne the MD of An Post Retail and Postmaster Brendan O’Neill.

Debbie Byrne, Managing Director of An Post Retail says An Post is delighted to unveil this first new generation offering to the people of Newbridge. "This office gives us the opportunity to provide the people of this town with the services and the products they need, but in a facility that suits the demands of a modern retail business. This a great day for An Post and we look forward to welcoming all our customers, long standing and new, to our new look premises."

Brendan Kelly thanked his Newbridge customers who had shown considerable patience as the office was refitted to make way for the super modern counter setup. "Newbridge can be really proud of this post office it is going to be a great addition to the town and we look forward to welcoming them here. This is not just a new post office it’s a whole new way of doing with our customers."

The new postmaster is no stranger to customers at main street having worked there as a post office clerk for a number of years. Indeed, his former boss John Normile is still part of the team at Main Street.

The move marks a major investment by An Post and a step change in the provision of financial services and e-commerce services to the people of Newbridge. The new modern office is open-plan with a variety of customer services areas including a self-service kiosk and information points. A key feature is the array of post office counters which feature automated teller units and which are designed for ease of use by all customers. The store mirrors An Post’s combination of tried and trusted post office service with a new modern and heavily digital future. The office is one of the first in the country to be equipped with An Post’s new parcel lockers. On offer here, along with all long established services, are a range of financial products including the An Post Money Current Account, Credit Card and loans from An Post Money with the market leading rate of 8.4%.

The office will open each day from 9am until 5.30pm and Saturday from 9 to 1pm.