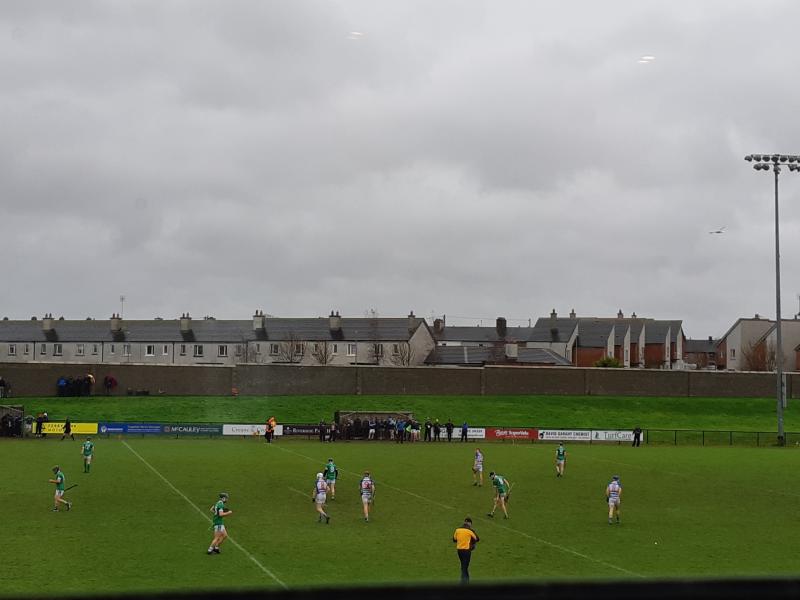 Naas got their Leinster Hurling Championship campaign off to the perfect start with an impressive victory over Cloughbawn at a wet and windy Enniscorthy.

Naas did all the damage in the second half as they outscored their opponents 0-10 to 0-2 with James Burke, Jack Sheridan and Brian Byrne all proving very elusive in attack.

Cloughbawn started well with Wexford star Harry Kehoe scoring six points in the first half as he continued on from a County Final victory where he scored 1-10.

Kehoe was unable to carry that form into the second period though and with half-time sub Mick Purcell having a big impact Naas turned the tide on their opponents.

Bob Whitty got both of Cloughbawn’s second half points and they were late in the day as Naas’s youthfulness outran the Wexford side.

Naas freshened things up from their County Final victory a month ago with Darach McDonnacha and John O’Malley coming into the team with Donie McSweeney and Philly Cocoman dropping out.

The game was played in very difficult underfoot conditions with a soft pitch resulting in a very different game to what Naas are used to.

The first half was dominated by frees and Harry Kehoe got the Wexford side up and running in that regard with a 2nd minute effort.

Cloughbawn only won the Wexford Intermediate Title a week ago but they weren’t showing any signs of a hangover from that win as after MJ Furlong doubled their tally two more frees from Kehoe had Tommy Roche’s side 0-4 to 0-0 ahead.

Brian Byrne and Jack Sheridan both hit shots wide of the goal for Naas before James Burke got them up and running with a 15th minute point from play.

Jack Sheridan knocked over a free a couple of minutes later and Naas looked in decent shape as they only trailed by two points after playing against the wind.

Kehoe and Shane Ryan with a lovely point on the turn then exchanged efforts but Cloughbawn finished the half the better.

Kehoe firstly knocked over his fifth free to make it 0-6 to 0-3 to the hosts and while Brian Byrne retaliated another score from Kehoe which turned out to be his first from play left Cloughbawn leading 0-7 to 0-4 at the break.

With the aid of the wind Naas were transformed in the second period and within nine minutes they had wiped out the Cloughbawn lead with James Burke landing two fine points from play after wing back Sean Gainey also got on the scoresheet.

Kehoe who couldn’t miss throughout the first half for the Wexford Champions was off his game when the wind wasn’t at his back on the resumption although one of his attempts that fell short did land at the hurl of Bob Whitty but his attempted volley went wide.

Naas then went into the lead for the first time in the 41st minute when Byrne knocked over a free from distance.

Naas were much the dominant side at that stage and they knocked over four more points in a row to lead 0-12 to 0-7 going into the final ten minutes.

The considerable threat of Burke, Byrne and Sheridan all found the target with Sheridan getting two points including a wonderful sideline cut.

After Cloughbawn squandered a few more chances they finally got off the board for the half when Whitty knocked over a 56th minute free.

Whitty got another point before the end for Cloughbawn but successive frees from Byrne and Sheridan wrapped up a fully deserved five point victory for Naas.

Naas will now play Tullaroan of Kilkenny in the semi-finals in a fortnight’s time.