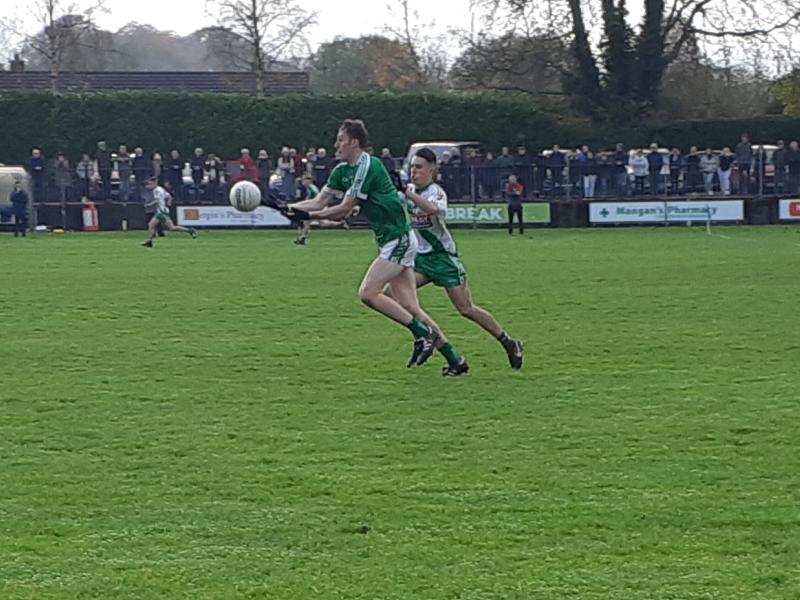 A 65th minute penalty from Evan O’Brien got Moorefield out of jail as they got the better of Sarsfields in the Under 21 Football Championship on Sunday afternoon.

O’Brien’s goal was a real last chance saloon after Aaron Masterson launched a high ball into the square and luck was on the Moores side with Sean McDonnell grabbing the ball before he was fouled for a spot kick.

Ronan Sweeney’s Moorefield outfit looked in complete control when leading 0-6 to 0-0 after only fifteen minutes but over the course of the rest of the contest Sarsfields worked their way back into it and they led in the 63rd minute before O’Brien struck the winner.

Cian McHugh and Karl Hartley almost single handedly put the Sash into a winning position and the fact they were so close to victory was an achievement in itself considering they were without a sizeable amount of their Senior squad who are preparing for the Leinster Championship.

County Final man of the match Darragh Ryan and goalscorers Cian Costigan and Shane Doyle were just some of the players to miss out for the home side.

Those absentees seemed to really have an effect on Sarsfields as their opponents burst out of the traps.

Evan O’Brien kicked a 3rd minute free to put Moorefield in front and that was quickly followed up by an Eoin Meehan 45 and an effort from play by Dylan Quirke.

Meehan who was a member of this year’s Leinster winning Kildare side then kicked two fine points from play and when Aaron Masterson made it a six point game Sarsfields looked like they had a mountain to climb.

A 19th minute Cian McHugh free got the Sash on the board and seconds later on the back of a poorly directed kickout Ben Scanlon had a palmed effort on goal saved by Ryan Quirke.

McHugh duly added on three more frees before the end of the half including one from outside the 45 as Moorefield took a 0-6 to 0-4 lead into the break.

Moorefield increased the margin with a free from O’Brien but Sarsfields weren’t going away and a well taken score from Senior panellist Karl Hartley kept the hosts in touch.

O’Brien and Eoin Cahill then exchanged efforts before a few potential flashpoints occurred off the ball with Aaron Masterson and Tadhg Hoey in particular paying pretty close attention to each other.

It threatened to spill over at a stage but those physical stuff seemed to rise Sarsfields as after McHugh missed a few opportunities he eventually landed his fifth placed ball to leave just two between the teams.

Moorefield stalled the Sash momentum with points from O’Brien, Evan Kavanagh and Ian Dunne to go ahead on an 0-11 to 0-7 scoreline but Sarsfields still had a response.

Points from Hartley, McHugh and Jack Keogh levelled up the game entering stoppage time and when Hartley then kicked his fourth point in the 63rd minute Sarsfields looked set for victory.

Moorefield are never finished until the fat lady sings though and true to form they ambushed the Sash with the last play when a long ball from Masterson found Sean McDonnell and when the sub was fouled a penalty was awarded which O’Brien converted.

Referee Owen Murphy blew the whistle from the resulting kickout as Moorefield now go on to face Celbridge in the semi-finals.