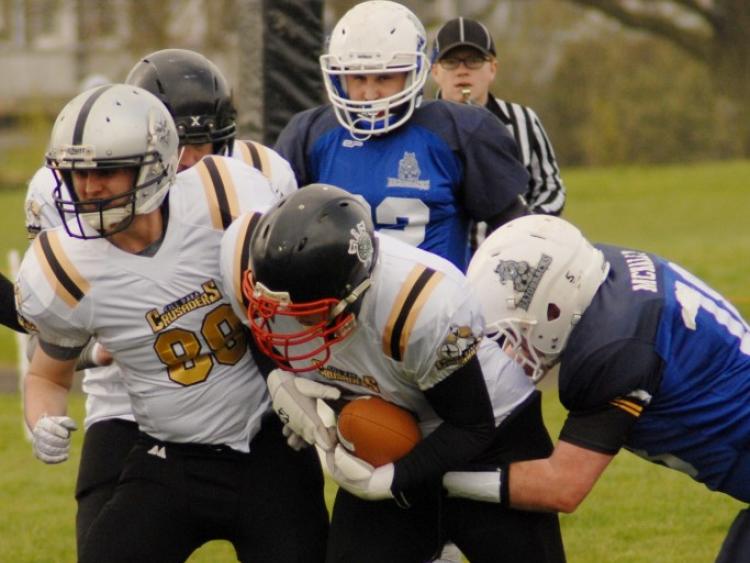 After their most successful season to date, Kildare’s American football team, the Cill Dara
Crusaders, have returned to training in preparation for 2020.

Still relatively new amongst their peers around the country, the Crusaders racked up an impressive record on their 2019 campaign, going 8 – 1 on the season and winning the league championship game to boot.

This success sees the team promoted to the IAFL 1 division for next years season, where many well established teams will put them to the test come the opening games in March.

With this in mind, the team has decided there’s no time to waste, and have commenced getting the squad prepared for what’s ahead.

Meeting every Sunday morning through the colder months helps build the teams family spirit that has created a strong
chemistry, as well as a confidence in each other’s ability to deliver on game day when it’s needed most.

The Crusaders are hosting rookie days over the pre-season training period, where new and willing participants are encouraged to come and give Ireland’s fastest growing sport a try.

The rookie days will be held on the 24 th of November and 12 th of January. The sport is open to anyone over the age
of 18, both male and female, and the team are aiming to recruit both players and coaching staff.

No previous knowledge of the sport is necessary, all anyone needs to play is a pair of boots and a
gumshield.

Anyone interested can find the team on Facebook, or simply head down to one of their
training sessions, where we’ll be happy to help you find your feet.

Training is held from 11am – 1pm on Sundays at the teams’ home ground, Newbridge College.