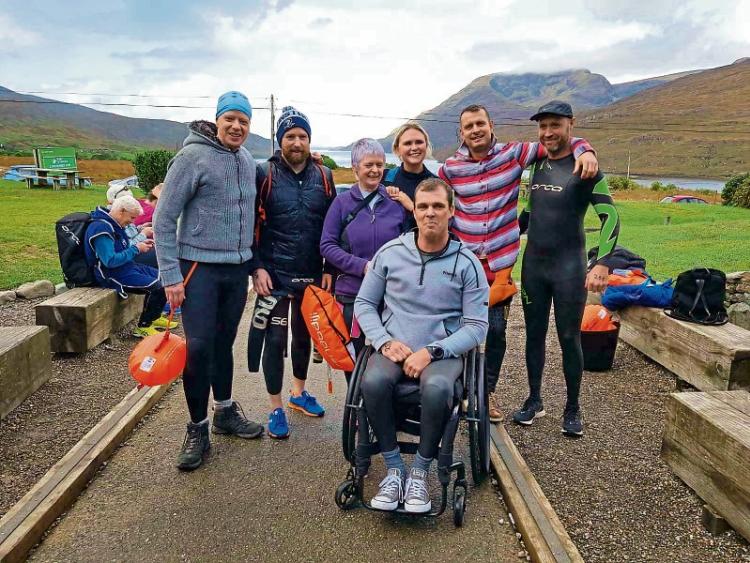 They say that from adversity comes strength and on October 12 Matt Walker, who suffered a spinal cord injury in August last year which left him paralysed from the waist down, demonstrated just that.

Matt, a landscaper from Caragh Court in Naas, took part in the Great Fjord Swim to raise funds for Stoke Mandeville Hospital in England, where he was treated for his injuries. Matt has been left permanently in a wheelchair after falling from a ladder on a job on August 6, 2018, breaking his spine in several places.

While working in a client’s garden and descending from a ladder on a hedge trimming job, electricity arced from an overhead cable and connected with Matt’s machine, which electrocuted him.

But just over a year later he completed a challenging open water swim in the Killary Fjord, sheltered only by the beautiful mountains of Galway and Mayo in the west of Ireland.

The 750m swim took place at 2.30pm on Saturday in the icy cold waters of the fjord and Matt smashed the challenge in a very respectable 33 minutes.

Matt, 39, was surrounded by an incredible team. Seasoned swimmers Paul Quigley (who came up with the original idea), Stephen Tighe and Mercedes Bagnall, took part alongside Matt to keep him safe and encourage him throughout the swim.

Also, Matt’s mum, Eibhlin Ni Chearbhaill (of Alice’s restaurant in Naas) joined the swim supported by Anne Collins, Mark Dunleavy and Jessica Blount who swam with her as she crossed the line in 54 mins to choruses of ‘Come on Eileen’ at the finish line.

One of Matt’s best friends, Brendan Walsh (The Zoo, RTE) also took part and completed the course with his inevitable enthusiasm and energy.

In the evening, celebrations continued at Hamiltons in Leenaun, as the proprietors Tony and Breda kindly opened up their bar to a charity gig where none other than Paddy Casey performed late into the night, much to the delight of the swimmers and locals alike.

Fundraising associated with the swim started a few weeks ago on Go Fund Me and has already raised more than €13,000.

At Matt’s request, some of the money raised will go to provide virtual reality equipment for spinal injury patients in rehabilitation at the National Spinal Injury Centre (NSIC) at Stoke Mandeville, as well as important sports equipment for the physio department.

And at Paul’s request, any additional funds will be assisting Matt with rehabilitation and mobility equipment.

Eibhlin said the event has raised some €17,000 and the final figure will b e known this week, adding “I want to thank everybody who supported us in this great venture.”