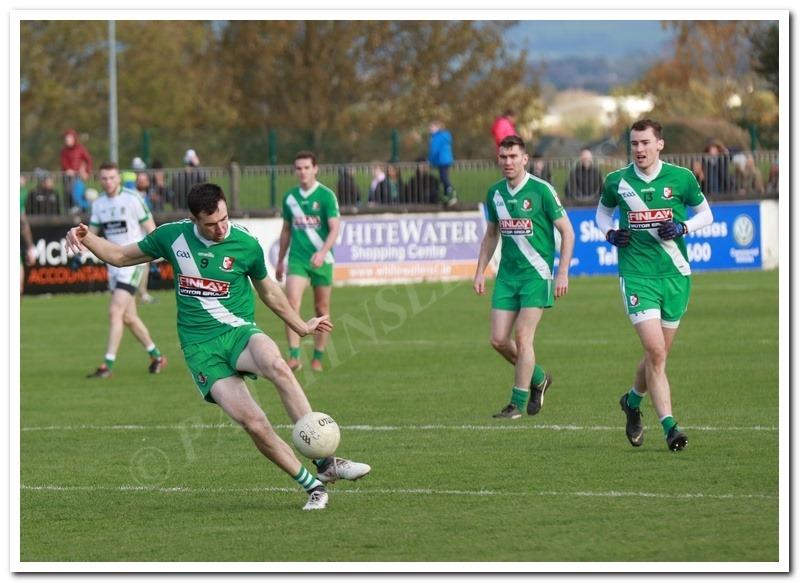 Sarsfields Leinster Championship hopes fell at the first hurdle when they went down to Eire OG of Carlow in Netwatch Cullen Park.

Eire OG recently won the three in a row in their county and they showed all their experience as they outfoxed a youthful Sarsfields side.

Matty Byrne and Ben McCormack were arguably the Sash’s most impressive performers in the Kildare Championship so being without them meant they were probably up against it from the start and despite a good first half they soon ran out of gas.

Sarsfields led 0-6 to 0-2 at one stage of the first period but a well taken Jordan Morrissey goal for Eire OG stalled the Sash momentum before the sides went into the break level.

The second half was the most disappointing aspect of the Sarsfields performance as apart from a Ray Cahill 42nd minute free they went scoreless for the entire thirty minutes as an impressive Eire OG team eased ahead.

Incidentally Sarsfields didn’t finish with their full compliment after Sean Campbell was sent off late on as Eire OG now go forward to face off with Portlaoise in the semi-final.

Sarsfields came into the game having to cope with the loss of Ben McCormack and Matty Byrne who have both departed for Australia and Davy Burke brought in Cian McConnell and Alan Smith in their absence.

Eire OG themselves made four changes to the official programme and in a tight and tense opening they began the better with dangerous forward Chris Blake putting the Carlow side in front with a 3rd minute free.

The same player then doubled his tally sixty seconds later on the back of great work by team captain Sean Gannon.

Sarsfields finally got in to their groove with a free from Caoimhin McDonnell in the 6th minute and what followed was a devastating period for the Sash as they scored the next five points with all of them coming from play.

McDonnell added to his tally after Barry Coffey equalised before Conor Hartley, Cian Costigan and Alan Smith all scored to give Sarsfields a 0-6 to 0-2 lead at the halfway mark of the half.

Sarsfields looked primed to kick on at that stage but it never transpired with Eire OG points from Blake and Ross Dunphy narrowing the deficit to two.

Eire OG then struck for the games opening goal in the 18th minute of the half when a Patrick O’Sullivan kickout was punched on by an Eire Og hand in midfield and all of a sudden a huge gap opened up for Jordan Morrissey to run into and he fired a shot to the back of the net.

Ray Cahill missed a placed ball in the aftermath for Sarsfields first wide and when Blake kicked his fourth free of the half Eire OG held a 1-5 to 0-6 advantage.

Sarsfields finished the half strongly though and with Barry Coffey becoming more influential he kicked a fine score from distance before Caomhin McDonnell scored another free in stoppage time to deadlock the sides at the break.

Eire OG were in the changing rooms for an age at the break but urged on by the words of their manager Bryan Carbery they raced out of the blocks with three points in as many minutes at the start of the second half.

Blake got the ball rolling when he kicked a brilliant score to put the Carlow side in front when surrounded by a number of Sarsfields defenders and when Cormac Mullins kicked two fine efforts there was three points between the sides.

Mullins second score was a great goal chance when Sean Gannon found himself on his own and he fed the point taker but with Patrick O’Sullivan racing out it was chance for them to find the net but the ball went too high and between the posts.

Sarsfields reduced the gap to two points with a Ray Cahill free in the 42nd minute but remarkably it was the Newbridge side’s only score in the second half.

Despite the inaccuracy on the scoreboard Sarsfields had a number of opportunities to at least get level but Cahill, Shane Doyle and Darragh Ryan all missed the target.

The confidence sapped out of the Kildare Champions as a result and Eire OG cruised home with four points in the final ten minutes.

Gannon, Morrissey and Darragh O’Brien all found the target before the icing was put on the cake with sub Niall Quinlan kicking over a sideline kick.

Things only got worse for Sarsfields as from that Quinlan point Sean Campbell was given a straight red card for a striking offence that really summed up their day as Eire OG won out on a 1-12 to 0-9 scoreline.