Celbridge and Moorefield deadlocked in Under 21 Football Semi-Final 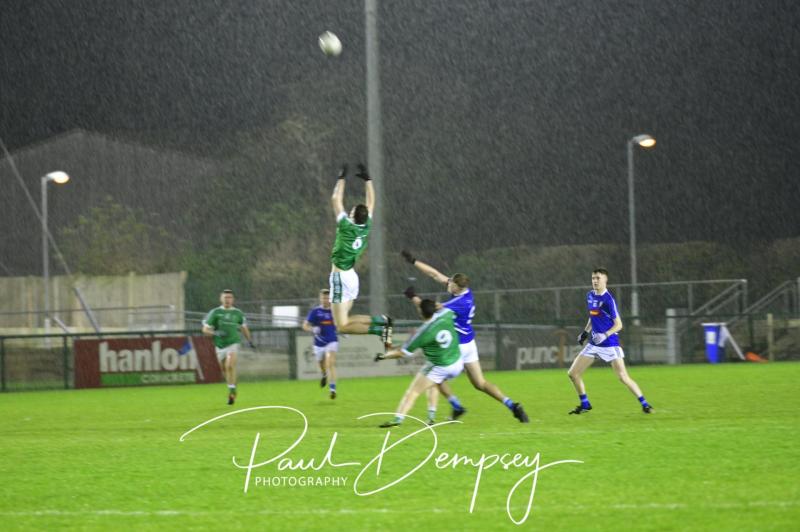 Moorefield's Aaron Masterson going up for a ball during Sunday evening's Under 21 Football Championship Semi-Final against Celbridge. Photo: Paul Dempsey

Moorefield overturned a five point half-time deficit to force a replay against Celbridge in the Under 21 Football Championship Semi-Final at a rain soaked Manguard Plus Hawkfield.

Evan O'Brien nailed three long range frees in the closing stages that got his team out of a deep hole they looked incapable of emerging from.

As well as O'Brien there was big contributions from Jordan McGrath and Adam Meehan for Moorefield but on the other side Celbridge will wonder how they didn't see this out.

A Conor Doyle goal in first half stoppage time had Celbridge leading 1-5 to 0-3 but in similar fashion to their two other Championship games they sat back a little and Moorefield took full advantage.

One bright spark for both sides was the return from injury of both Adam Sweeney and Tony Archbold and they will hope they can get a full game out of them in the refixture on Sunday.

Torrential rain throughout made conditions very difficult for the players but Celbridge did start well and they were on the board in the opening minute when Liam O’Flynn kicked over.

Moorefield then responded with a Jordan McGrath score from play and an Aaron Masterson free that gave the Newbridge side a 0-2 to 0-1 lead at the halfway mark of the half.

Celbridge soon retook the lead though with efforts from Conor Doyle and Niall O’Regan before McGrath’s second point of the game for Moorefield deadlocked the sides approaching the end of the half.

It was low scoring fare but Celbridge got a bit of momentum going and 1-2 without reply before the break had them in the driving seat with the midfield pairing of Dean O’Donoghue and Darragh Murphy getting the points before Conor Doyle cracked a shot into the top corner past Ryan Quirke to give his side a 1-5 to 0-3 lead.

The five point advantage soon became six at the start of the second half when Murphy added his second point and Moorefield looked like they had a mountain to climb.

Celbridge did go through a barren spell of not scoring for seventeen minutes though and that gave Moorefield who appeared in their changed white strip for the second half a chance with Ian Dunne, Adam Meehan and Evan O’Brien all scoring from play to narrow the gap to three points.

O’Brien then converted a free from just inside the 45 and with the score at 1-6 to 0-7 it looked like anyone’s game.

Celbridge then steadied the ship with half-time sub Tony Archbold knocking over a 50th minute free and in a game where scores were hard to come by it looked vital.

Moorefield kept coming though and they were level by the time the clock went to sixty minutes with two more long distance frees from O’Brien coming either side of a well taken curled point from Adam Meehan.

Both teams had chances to snatch a winner in the remaining time allotted but nothing came of it while Moorefield did suffer a blow right on full-time when James Dowling was given a straight red card that will likely see him miss out on the replay after the game finished all square.