Patricians fall to defeat in Br.Bosco Cup opener with St.Benildus 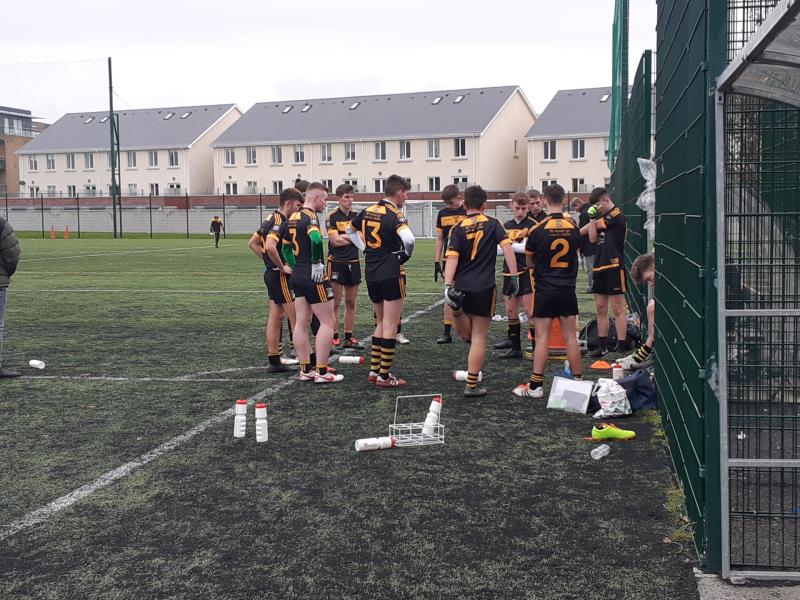 The Patricians of Newbridge team at half-time.

Patricians of Newbridge went down to St.Benildus of Dublin in the opening round of the Leinster Championship Br.Bosco Cup on Wednesday afternoon.

Two second half goals from Bryan Keogh Smith and Adam Mezynski put the seal on the victory for Benildus but in truth Sean Monaghan’s 30th minute penalty was a real turning point in the contest.

Patricians were bright in the first half with Ben Scanlon scoring four points but the rather soft spot kick in stoppage time gave the 2016 Leinster Champions the lead at the break.

Despite all that though Patricians still nearly snatched a draw when Ben Scanlon had a late shot brilliantly saved by Liam Conway.

As a result of the defeat and a three team group Patricians will now go forward to play defending champions and fellow Kildare School Naas CBS in a must win game next Tuesday at College Park.

Patricians started well with Ben Scanlon kicking an opening minute free and while Luke Cullen responded with an effort from play the Newbridge School then scored four of the next five points.

Scanlon got three of those with two from play while Moorefield’s Ciaran Shiels Conlon also split the posts.

Ciaran Foley got the sole Benildus point during that spell as the hosts trailed on a 0-5 to 0-2 scoreline before a Sean Monaghan free left two between the sides.

Monaghan then struck for the games opening goal when Luke Cullen was adjudged to have been fouled in the square and a penalty was awarded for which the centre forward finished in style.

Adam O’Brien duly followed up with a point as Benildus held a 1-4 to 0-5 lead at the break.

Benildus missed a goal chance at the start of the second half when Luke Cullen palmed wide before Cian McHugh left just the minimum in it.

The Newbridge School couldn’t get level though as Adam Mezynski stormed forward to kick in the second Benildus goal a couple of minutes later.

The teams then exchanged scores with McHugh and Jack Keogh on target for Patricians while Monaghan and Ciaran Foley responded in kind.

Patricians got a lifeline in the 44th minute when a poorly directed kickout went straight to Eoin Meehan and the full forward fed McHugh who stoked a shot to the net.

Patricians couldn’t build on that though as almost immediately Benildus ran downfield and Bryan Keogh Smith kicked in their third goal.

Despite being five points down at that stage Patricians didn’t throw in the towel with subs Jack Keogh and Sam Guirk pointing before Meehan’s first effort of the day kept Patricians in the hunt.

Benildus then kicked a 63rd minute point in the shape of Bryan Keogh Smith to move the lead out to three but they were still holding on come the end after a goalbound Scanlon effort was saved with the full time whistle arriving just seconds later.