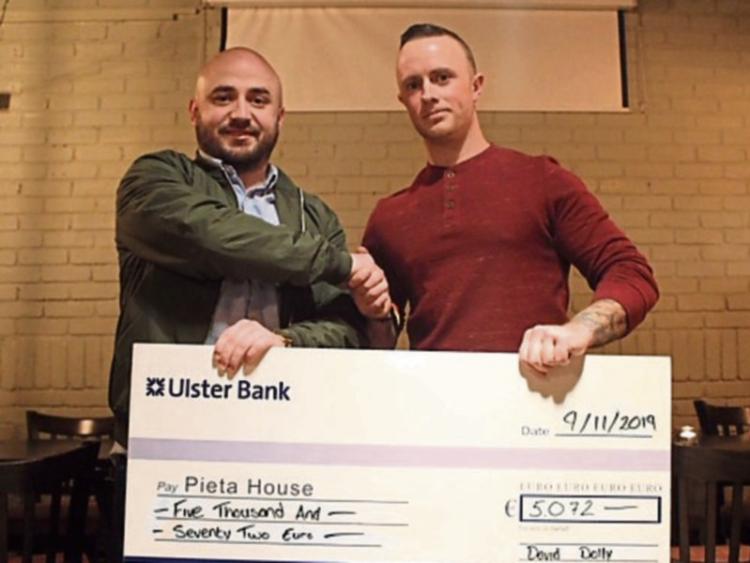 Caragh man, David Dolly, found it tough climbing Mount Kilimanjaro but on Saturday, November 9, he was in Cooke’s of Caragh to present a cheque for €5,125 to a representative of Pieta House.

He had undertaken the climb after being touched by the death of one of his friends, Cian Mullally, last year.

David, who decided last January, to do the climb, raised the Irish flag at one of the peaks.

A driver for Dolly Skip Hire, he presented the cheque to Newbridge man, Eoin Moore, who works for Pieta House.

SEE ALSO: Class act at the Moat Theatre in Naas

David, who climbed Croagh Patrick in part preparation for the Machame route at Mount Kilimanjaro, did his climb with the Earth’s Edge group.

The 29 year old truck driver, was one of a group of eleven which set off from Dublin Airport on October 21 for the twelve day trip. Among his companions were Fiona Mellen, Michelle Byrne, Colin McCough, Cara Murphy, Laura Cullivan, Martina Bugell, Laura Jordan and George Ferguson. “It was tough,” David told us. “It lashed rain for the first two days.” He found it hard to sleep. “It was mentally challenging.

His boots were nearly always wet and he got a slight altitude sickness on the third day. “We acclimatised on the fourth and fifth days,” he said.

It was so cold that they slept in their day clothes.

All of the money raised by David has been donated to  Pieta house suicide and self harm awareness.

The travel and climb was funded by himself.