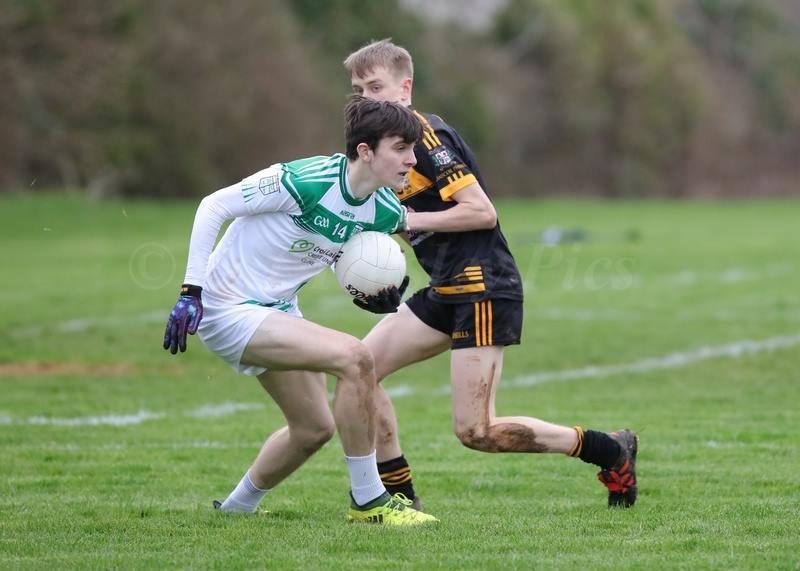 It was one of the more hectic endings to a game that you are likely to see as Moate somehow got out of Scoil Mhuire with a point in the Br.Bosco Cup on Wednesday.

Moate had looked the better side when they led by three points at half-time but Clane were much improved in the second half and after John Lynch goaled they looked set to claim the victory.

Moate fought back to within three points and in the 62nd minute they won a highly contentious penalty which was stuck away by Adam Donoghue.

The two teams then exchanged further scores before Clane had a chance to seal the win but a goalbound effort from Oisin Tighe could only rebound off the post.

Despite all that Cian Burke did keep the hosts in it with a couple of great saves and when the excitement has calmed down both teams will realise they are still in it ahead of their final group game.

It was nip and tuck stuff over the course of the opening quarter with the sides going score for score that resulted in them being deadlocked at 0-4 apiece.

Luke Buckley on the double as well as Tobby Conteh and Matthew Cox got the Moate points while Clane registered with Darragh Swords, John Paul Gill, Cormac Vizzard and Oisin O’Sullivan all on target.

Moate then kicked ahead with a superbly taken effort from Conteh coming before Buckley knocked over a free.

Moate couldn’t shake off their Kildare opponents though and back to back scores from Tommy Gill and Adam Fanning left the sides level for the fifth time.

Moate dominated the closing moments of the half though with Dunning scoring well before the visitors squandered a glorious chance for goal when a flowing move resulted in the ball going to sub Eoin Curran but instead of calmly slotting past Cian Burke he rushed his shot and he had to be content with a point.

Curran then extended his tally a couple of minutes later and Moate went into the break leading by three points.

By the 42nd minute Scoil Mhuire were back level after half time substitutes Oisin Tighe and Ger O’Connor made a huge impact with Tighe kicking two efforts off either foot before O’Connor levelled the game.

Darragh Swords then kicked Clane in front as they took full advantage of Moate missing a few frees in the shape of Buckley and Conteh.

Clane then managed to kick on with John Lynch powering forward from centre back and after exchanging passes with Tighe he drilled a shot past Mickey Lynam.

Tommy Gill duly followed up with his second point of the game and Clane looked in control leading 1-11 to 0-9.

Moate kept at it though with Dunning kicking consecutive scores with his second effort being a shot at goal that Burke touched over.

As a result there was only three points separating the sides going into stoppage time and Moate got the lifeline they needed in the 62nd minute when the ref adjudged a push to have occurred after a long ball into the square and Adam Donoghue cooly slotted home.

That wasn’t the end of the drama though with Adam Fanning kicking Clane back in front before Burke once more saved as he tipped a Buckley shot over the bar.

At 1-12 each a draw looked the likely result but Clane still had one more chance when Fanning, O’Connor and Tighe linked up but instead of taking the point they tried to work a goal and Tighe fisted a shot off the post.

Scoil Mhuire will now travel to play Athlone on Wednesday afternoon in the next round.